The Committee on Foreign Investment in the U.S. (CFIUS) has pivoted quickly to a broader role. It already has a presidential block under its belt for the year. And with respect to special national security risks and concerns stemming from the Covid-19 outbreak and emerging economic crisis, the committee was already prepared. CFIUS’s extensive new catch-all-laden regulations covering critical infrastructure and technologies, implemented this February, came just in time for the pandemic and downturn. They even cover investments in U.S. businesses that have received Defense Production Act (DPA) Title III funding. And the Committee has been tackling foreign hostile takeovers since before recent reforms.

Year to date, both the deal count and aggregate dollar volume of mergers, acquisitions, and investments involving U.S. targets and foreign acquirers are down compared with the same period in 2019. Deal volume is down by around 30%. Though this drop represents a staggering decline in deals, CFIUS’s caseload has not gotten any lighter. In fact, publicly available information and news reports suggest that the Committee has been more active so far this year compared to the same period last year. Given new types of deal activity and CFIUS’s new readiness, we may expect even more of an uptick in activity in the remainder of 2020.

CFIUS is running with the expanded mandate imposed by the Foreign Investment Risk Review Modernization Act of 2018 (FIRRMA), enacted in August 2018. Less than a month after its new implementing regulations went into effect this February, the Committee gained a key victory by way of a presidential order to unwind the StayNTouch, Inc.-Beijing Shiji Information Technology Co., Ltd. deal (the sixth ever Presidential block of a transaction to occur at the recommendation of the Committee). But CFIUS hasn’t only put up road blocks: Several deals have also reportedly gained committee approval this year, including the $27 billion Refinitiv-London Stock Exchange Group deal and the $8.7 billion Cypress Semiconductor Corp.-Infineon Technologies AG deal.

Additionally, it appears that CFIUS is taking steps to move more quickly and take proactive steps to stop risky transactions while they are still being contemplated and before they are completed. (It is safe to assume that the Committee aspires to be out of the unwinding business.) One particularly interesting recent news report describes a CFIUS probe into a private equity firm after the firm’s largest backer, a Chinese company named China Reform Holdings, attempted to acquire four additional seats on the board of directors of Imagination Technologies, a California-based graphic chip manufacturer and Apple Inc. supplier. 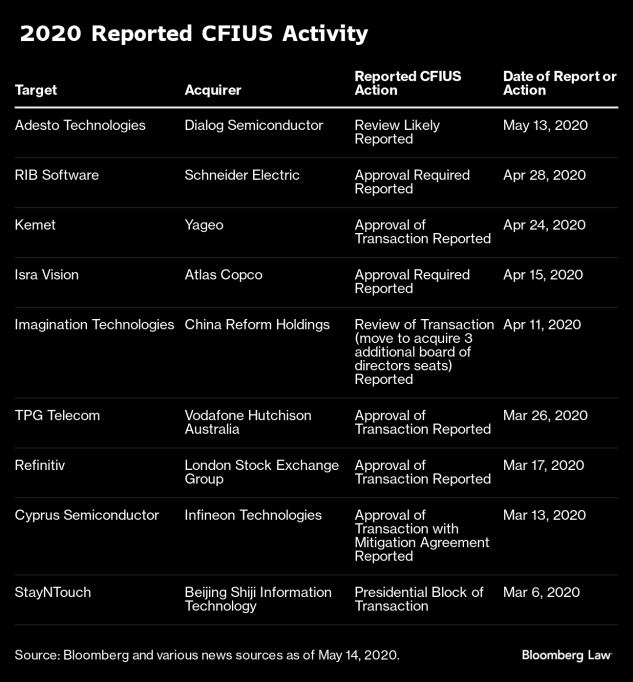 In addition to this momentum, CFIUS is poised to examine investments and acquisitions relating to key businesses involved in combating pandemic supply shortages. If a company receives incentives under the Defense Production Act’s Title III, certain subsequent investment in or takeover of that business would be subject to CFIUS review for a period of 60 months following the receipt of the funding. 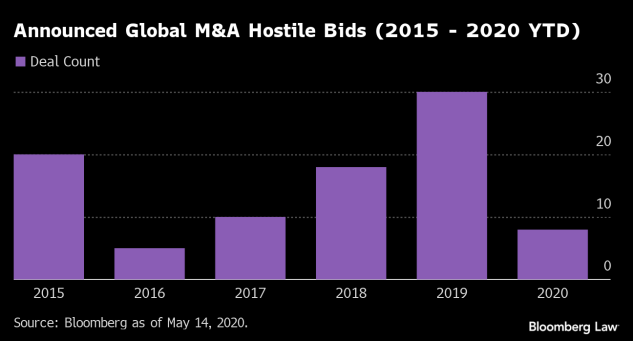 Also, it is important to note that data show a steady annual upward trend in global hostile bids that started in 2017 and led to a peak in 2019. The data do not yet reflect a particular uptick in either domestic or cross-border hostile bids that would appear to stem from the pandemic or downturn. So far in 2020, eight global hostile M&A bids have been launched, with an aggregate deal value of $38.6 billion, as compared with 14 hostile bids valued at $26.1 billion launched during the same period in 2019. Only two of this year’s hostile bids were cross-border deals, compared with three cross-border hostile bids during the same period last year. Similarly, only a small portion of these bids were for company takeovers and an even smaller were hostile takeover bids involving U.S. targets.