A FTSE share index board in the atrium of the London Stock Exchange Group.
Photographer: Jose Sarmento Matos/Bloomberg

The London Stock Exchange has a problem: Delistings and too few initial public offerings have combined to shrink the LSE at one of the fastest rates among the global stock exchanges.

In the first half of this year, IPO activity in the UK represented only slightly more than 11% of all IPOs in Europe, and London IPOs have fallen to their lowest levels since the Great Recession. The UK has begun tweaking its listing rules to stem the decline, but parity with the US will require that the UK and Europe accelerate incubation of high-growth companies, like technology and biotechnology startups.

Brexit has only added to the exchange’s woes. In November, RyanAir became the first company to blame Brexit on its delisting plan. Last month, private equity firm Allied Minds Plc faulted the very high costs of maintaining its LSE listing for considering moving its listing elsewhere. Soaring energy costs and an expected UK recession only serve to dampen the market environment.

The Troubling Tale of the Ticker Tape

The LSE didn’t participate in the pandemic IPO boom nearly to the extent of its US counterparts. As the graphic below illustrates, the two principal US equities exchanges trounced the LSE in 2021. 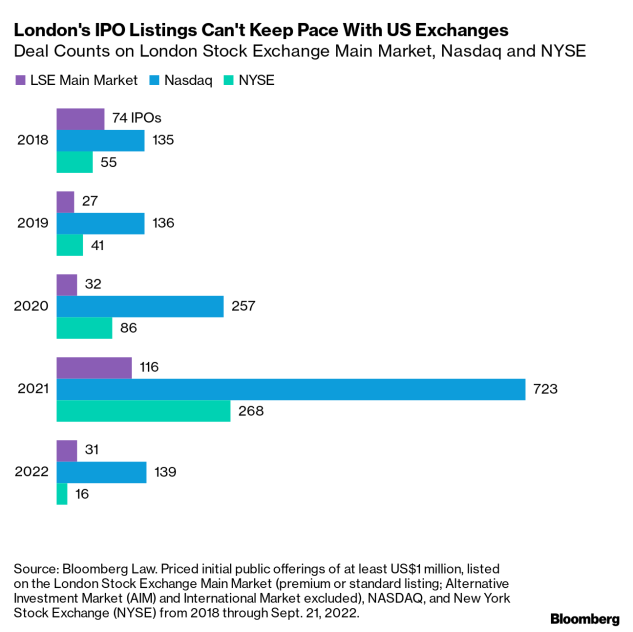 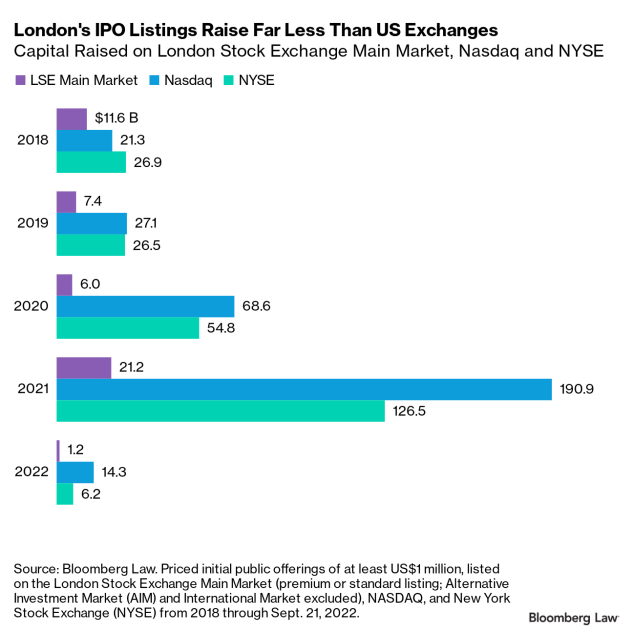 The reasons for this disparity are complex. In addition to Brexit, among the many factors are government regulation and the accompanying regulatory arbitrage, and the LSE’s complicated listing rules. Historically, cultural and legal barriers across countries have impeded widespread regional adoption of European startups’ products and services and made matching US compensation incentives for key talent too daunting. Other reasons include challenges raising money (including insufficient venture capital) and rigid labor laws.

How LSE Rules Compare to NYSE and Nasdaq

The UK government is trying to close the regulatory gap, but fundamental parity is only likely if Europe can incubate companies in areas such as technology and biotechnology, particularly desirable sectors for growth, at a rate and quality similar to the US.

Two particularly significant reforms have been proposed and implemented in the past two years for LSE listings: relaxing its rules to give more room for SPACs to operate and permitting dual-class stock structures. Some of the recommendations that were made in the March 3, 2021 UK Listing Review appear less consequential and arguably amount to rebranding or a change in regulatory emphasis.

Companies have also pushed for the easing of the LSE’s high liquidity requirement and have viewed the exchange’s mandate of three years of revenue history as an impediment for cash-devouring start-ups like biotech firms. Although a company’s financial statements and the fiscal health information that they convey are material information to investors, some companies seeking to list will be unable to provide a full three years. Startups tend to need to go public quickly to keep going, and have often turned to US listings, which impose less burdensome requirements to raise capital.

New rules adopted in December by the Financial Conduct Authority, the UK’s securities regulator, have addressed some of the most significant listing rules complaints. Liquidity requirements have been eased by reducing the free float (the percentage of shares that must be in public hands) from 25% to 10%. Dual-class share structures are now permitted, but with certain restrictions and conditions. A simplified, single listing-type has not yet been adopted, so the current categories of standard and premium listings (collectively, the Main Market) survive for the moment. A wider review into easing the track record requirement (three years of financial statements) is promised, but currently, waivers remain subject to consideration on a case-by-case basis.

There have also been proposals to give the FCA a mission similar to those assigned by other countries to their government financial markets watchdog, covering growth, competition, or improving the overall business climate. In the US, the SEC is charged with not only protecting investors but also facilitating capital formation and maintaining fair and orderly markets.

One of the principal drivers of IPOs on US exchanges, particularly the Nasdaq, has been special purpose acquisition companies, better known as SPACs. These investment vehicles have been controversial for the way they favor founders over ordinary investors and sometimes provide optimistic, if not baseless, performance expectations after a SPAC merges with a proposed target operating company. The SPAC market in the US has crumbled since late 2021, due to adverse market conditions and proposed new rules from the SEC that, if enacted, would materially restrict how SPACs operate.

SPACs have long been deterred from listing in the UK, whose listing rules are predicated on investor protection concerns. In 2021, in an effort to become more competitive with US exchanges—and with Amsterdam’s burgeoning SPAC market—the FCA relaxed its rules.

The most onerous of the LSE’s old SPAC rules was the listing rule that presumed that trading in a SPAC’s shares would be suspended on the announcement of a de-SPAC merger agreement. The rule was meant to protect investors from inadequate public information—and possibly from disorderly public markets at that crucial stage. The general suspension presumption is now removed for companies that meet certain criteria. SPACs still remain subject to the exchange’s rigorous listing rules, including transparency and disclosure obligations, and require a new prospectus, and the exchange retains the power to suspend trading of any stock if necessary for investor protection.

It wasn’t until November 2021, around the same time SPACs were rapidly declining in the US, that the LSE welcomed its first SPAC to the exchange, Hambro Perks Acquisition Company.

So, did London arrive too late to enjoy the SPAC party? Yes and no.

While definitely missing out on the pandemic-era boom in SPACs in the US, London has enjoyed some sizable SPAC IPOs recently, while the SPAC markets in the US and Europe have been in the doldrums.

Financials Acquisition Corp raised £150 million ($162 million) in an April 13 offering, and New Energy One Acquisition Corp raised £175 million ($189 million) in March. Since the new SPAC listing rules went into effect, the LSE has taken eight SPACs public while raising £404 million ($432 million), among IPOs of at least $1 million. A small number, to be sure, but a growing one in a very adverse market environment.

A Limited-Time Embrace of Dual-Class Shares

A cornerstone of the UK government’s effort to make the LSE more attractive to startups is a push to allow dual-class stock IPOs. HM Treasury issued its UK Listing Review in March 2021 making this recommendation, and the FCA adopted a rule change to allow dual-class shares in December 2021. This stock structure is controversial because it gives ordinary shareholders inferior voting rights with effectively little say in how the company is run, while enabling company founders to continue to control the firm. This is accomplished by giving the class of shares owned by the founders a high multiple of the votes compared to the share class owned by ordinary stockholders. So although ordinary shareholders may have contributed the majority of the company’s capital, they face greater risk without a proportionate say in how the company is run.

Dual-class share structures have been around for decades but it was not until Google’s (now Alphabet‘s) dual-class IPO in 2004 that the structure became truly popular and entrenched in the US. An academic study found that the percentage of dual-class controlled companies represented only 3% of all US IPOs completed from 1994–2006 but rose to 19% of all IPOs from 2017–2019. In the first half of 2021, nearly one-quarter of U.S. companies that went public utilized a dual-class share structure. The dual- or multiple-class structure is a favorite of tech company founders who are loath to give up control when they take their company public.

The UK Listing Review recommended improving the going public environment in London, in part by changing the rules to allow the dual-class structure in a bid to attract tech startups to the LSE. Final amended listing rules were announced via a policy statement in December.

The new listing rules impose certain conditions to ensure that high corporate standards are maintained. Among them: a cap of five years’ duration for the dual-share structure and a 20:1 maximum weighted voting ratio. The rules also limit the set of matters subject to the weighted voting to blocking a takeover and ensuring a founder remained a director.

Dual-class share structures are particularly popular on the tech-heavy Nasdaq, which is more laissez-faire than the LSE about allowing companies to set their voting rules. However, to prevent the disenfranchisement of public shareholders, Nasdaq prohibits the higher class voting security from being eligible to convert into the lower voting class, and companies may not accompany the creation of the lower voting class with an exchange offer.

It should be noted that investors overwhelmingly prefer a one-share, one-vote capital structure to dual- or multiple-class capital structures. The LSE may find that allowing dual-class share structures makes listing on the exchange more attractive for tech founders, who make the decisions on where to list, but relatively less so for investors, though any negative impact is likely to be muted.

Relaxed LSE listing rules should help but are unlikely to be enough to get the LSE to reach IPO parity with US exchanges. Besides recent or proposed changes to the rules, changes in tone can be helpful. But the reasons for the LSE lagging behind US exchanges are multifaceted.

A significant increase in IPOs would require a real market turnaround. So far this year, Europe’s IPO market has performed worse than any other region in the world, raising only $10 billion versus $15 billion in the Middle East and Africa, $20 billion in the US, and $104 billion in the Asia-Pacific region. This is a problem not amenable to a quick fix.

Frustratingly for UK market proponents, even where the UK is strong at developing innovative companies, such as in biotechnology, those companies frequently prefer to list in the US. Why? Deeper pools of capital, somewhat simpler and less onerous listing requirements, superior expertise in the market for understanding these often hit-or-miss propositions, and an investing culture that embraces more risk than in the UK.

Adjusting the listing requirements won’t fix these other factors continuing to work against the LSE.

To contact the reporter on this story: in Washington at pbrewer@bloomberglaw.com