Traditional and SPAC IPOs endured a dismal year in 2022, but a look back at past bear markets reveals that it was a fairly typical pullback. New rules for direct listings on US exchanges should make them more competitive with traditional IPOs going forward, placing traditional IPOs under additional pressure. Uncertainty about when the Federal Reserve will stop increasing interest rates and continuing competition for listings from China’s exchanges, combined with a strong pipeline of companies in China ready to go public and the movement by Chinese companies to delist in the US, further dims prospects for a quick market rebound.

High inflation, an illness born out of pandemic scarcity; fiscal largesse; the effects of war in Ukraine; and the medicine of interest rate hikes administered by central banks around the world, drove a high-flying IPO market to ground last year. The market recorded 219 IPOs (down 80% from 2021) raising a little over $24 billion (down 93% from 2021) in 2022, including SPAC IPOs, compared to 1,090 deals raising nearly $339 billion in 2021. 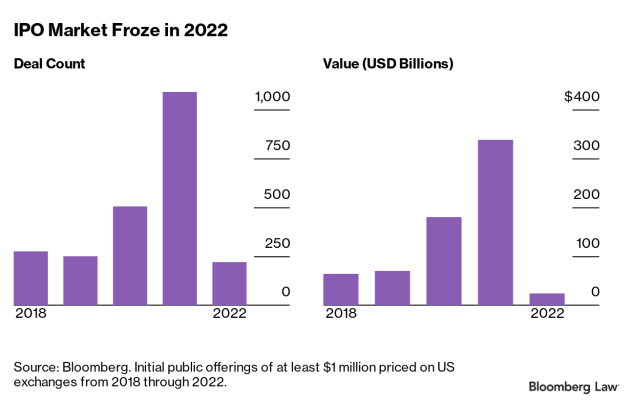 It may be helpful to compare recent results to recessions and other boom times. 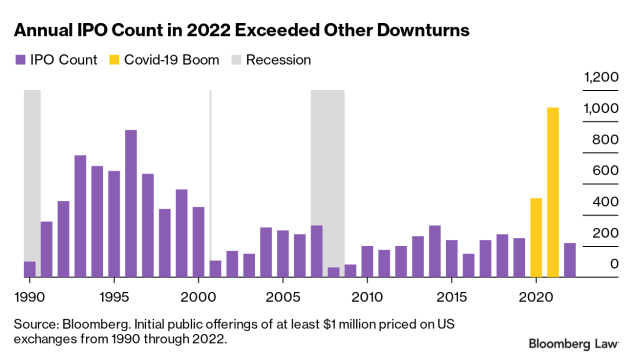 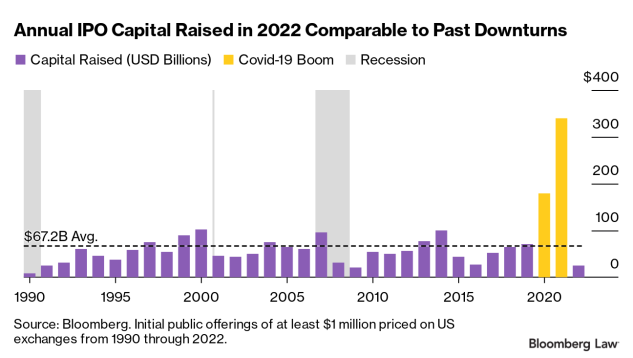 The Covid-19 stock listing boom, highlighted in yellow on both charts above, represents an exceptional time for the IPO market, particularly in 2021, when IPOs broke many longstanding records. The unusual confluence of events and policies that drove that bull market are unlikely to be repeated in the near future.

The SPAC IPO market—although also enduring a winter for deals owing to tough market conditions and stringent new regulations being considered by the SEC—surprisingly performed somewhat better than traditional IPOs. 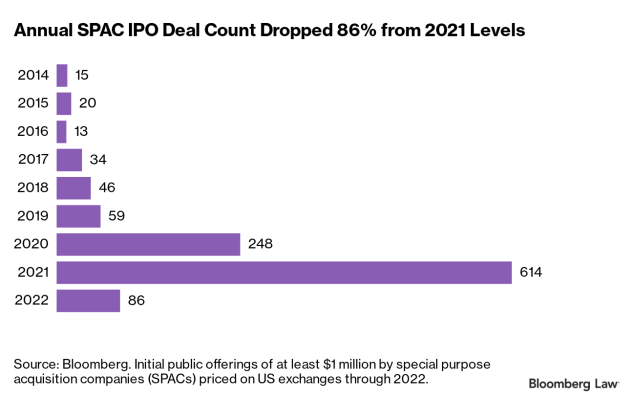 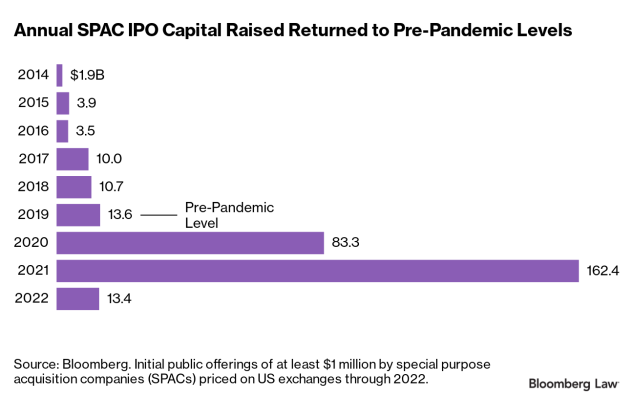 But the ongoing surge in SPAC liquidations may continue to dampen SPAC IPO demand in 2023. As of mid-December, a record 58 deals had been called off and, based on Bloomberg data and current spending rates, there are more than 85 de-SPACs that will have insufficient cash to make it through 2023.

The popularity of direct listings has been curtailed by a listing rule limiting a company’s capital raise to the range stated on its registration statement. That limitation has proved too restricting, increasing the risk of the offering failing, particularly because direct listings lack an underwriting syndicate to create a market for a company’s shares. Underwriters provide support to initial offerings, which sometimes proves essential to an offering’s success; direct listings cost less to complete than traditional IPOs by not utilizing underwriters.

Nasdaq received approval in December from the SEC for its proposal to ease its direct listing rules. The SEC is expected to bless a similar request by the NYSE soon. The new rule should make choosing a direct listing relatively more appealing to companies looking to issue primary shares and not to simply register existing shareholder shares in their initial public listing. The revised rule eliminates the registration statement’s offering range restriction. It may entice companies to embrace direct listings’ lower cost and the higher share prices realized by selling shareholders when shares go public via a direct listing, thereby adding to the competition felt by other means of going public.