As I work from home today, the mood is eerily similar to what I witnessed in 2008 as I prepared for my first private-sector legal job. The words “recession” and “crash” and “debt” were all over the news then, as they are today. In my bankruptcy world, banks were fortifying their special assets groups and law firms were filling their bankruptcy ranks, as they are today.

According to Bloomberg’s Recession Tracker, the likelihood of recession within the next year rose to 53% this month, up from 28% just a month ago. Meanwhile, other analysts are predicting that a global recession is already upon us. With the new coronavirus causing unpredictable turbulence in the markets and forcing consumers to sequester themselves at home, possibly losing wages and curbing spending, it seems more likely that the long-awaited recession is now on our doorsteps.

If we are truly on the verge of recession, what could that mean for bankruptcies?

For the first time in a decade, bankruptcy filings are on the rise. And there are several factors that could cause an even further increase. 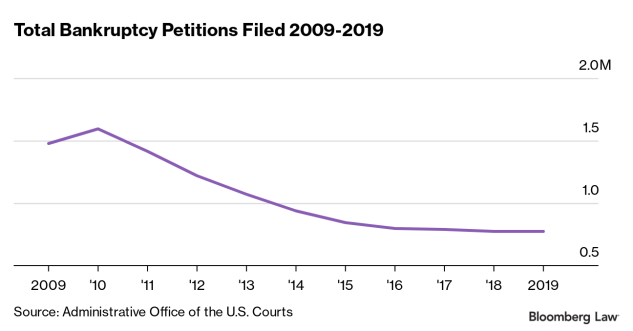 The Administrative Office of the U.S. Courts (AO) reported an overall annual increase in bankruptcy filings of 0.2% for 2019 over 2018. Last year, business bankruptcies saw a 2.5% increase over 2018, which could increase due to recent amendments to Chapter 11 of the Bankruptcy Code.

On Feb. 19, 2020, the Small Business Reorganization Act became effective. The new Sub-Chapter V of Chapter 11 is specifically designed to make bankruptcy protection more accessible for troubled small businesses by eliminating quarterly fees and shortening and streamlining the process. With the amendments, small business debtors may elect a process that more closely resembles the more expedited Chapter 13 process, complete with a trustee, shortened timelines, a condensed form plan, and the exclusive right to propose a plan.

It is too soon to see what affect the Small Business Reorganization Act will have on Chapter 11 filings, but its intent is to reduce hurdles for small businesses seeking bankruptcy relief.

According to statistics published by the AO, Chapter 12 bankruptcy filings, designed specifically for family farmers and fishermen, for January to December 2019 increased by 19.48% over the previous year. This is the largest annual increase in at least five years. 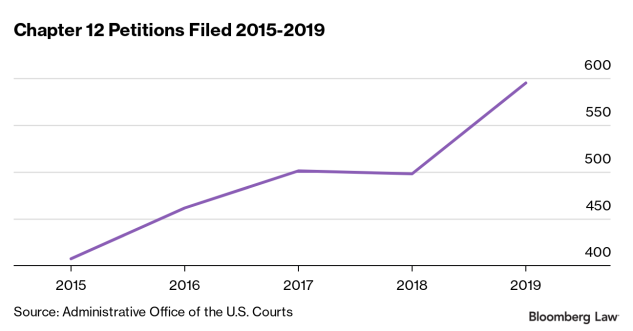 With the Family Farmer Relief Act raising the debt limits for family farmers from $4.3 million to $10 million as of Aug. 23, 2019, more farmers will have access to the specialized procedures and protections offered by Chapter 12.

Consumer bankruptcies could also see further increases. Based on bankruptcy eligibility timelines, millions of debtors who filed during and shortly after the Great Recession are, presumably, eligible to file again.

If we are reading the tea leaves correctly, and the country is truly on the cusp of a recession, the pump seems primed for an increase in case filings. It is too early to tell whether the filings will reach Great Recession levels, but that would require current numbers to more than double. The actual amount of the increase will depend heavily on whether the impending economic contraction is as drastic as that of the last recession and whether our nation has the ability to swiftly address and stop the spread of the new coronavirus.