A farmer holding a bunch of turnips on a farm in Basingstoke, U.K.
Photographer: Jason Alden/Bloomberg

The temptation for attorneys to pull up roots and leave their jobs still persists after more than two years of the Great Resignation, according to the results from two recent Bloomberg Law surveys.

Last month, I analyzed survey results showing that many attorneys reported that their colleagues who left their jobs had moved on to other firms. But as my legal friends and colleagues continue to make employment changes left and right, I’ve been curious about whether there’s any sign that this exodus will end any time soon. The survey results I found suggest that the number of attorneys planning on leaving their jobs is remaining pretty steady.

Over the past year, Bloomberg Law’s Workload and Hours Surveys have asked attorneys about their current job status. A consistent range of 7% to 10% have described themselves as “actively seeking” other job opportunities, with 8% of respondents claiming this status in January and February of this year. 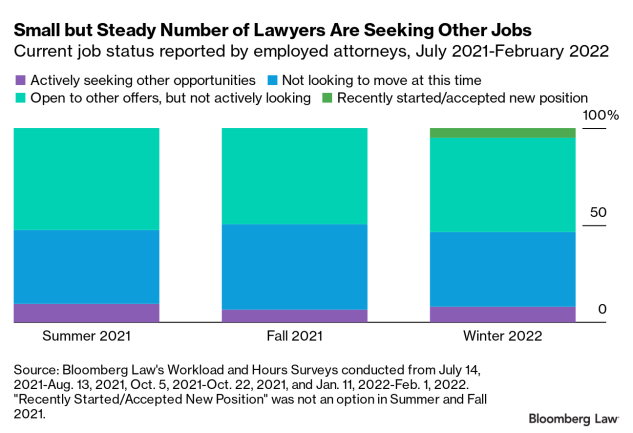 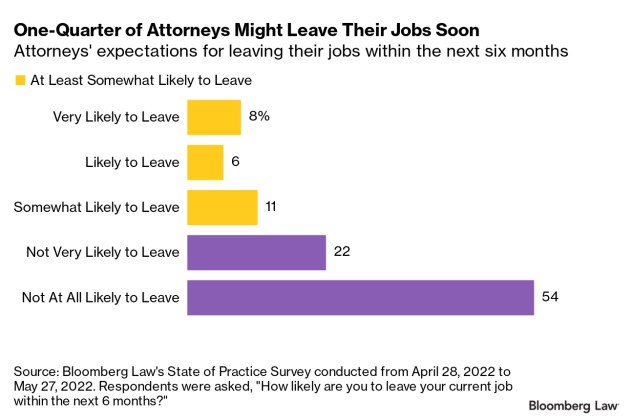 Why are there more respondents who are “somewhat likely” to leave than those who are “actively searching” for jobs? Does this indicate that the number of attorneys planning on leaving their jobs has increased in the three months between the winter Workload and Hours survey and the spring State of Practice survey? Perhaps, but I don’t think so.

Regardless, the numbers from the surveys suggest a continued desire among attorneys to leave their jobs for some type of greener pasture. They may be hoping that a move—any move—will lead to increased overall well-being. However, it is unclear whether new jobs will allow attorneys to grow in the ways they’re seeking. For example, a former colleague of mine left a firm earlier this year for a different firm, only to return to the original firm last month. With that in mind, organizations should take note and follow up with attorneys who have left to see if they too are interested in a re-planting.