The logo of Amazon Web Services Inc (AWS) is displayed on a sign at a pop-up office Jan. 21, 2019.
Photographer: Jason Alden/Bloomberg via Getty Images

Mobile platforms, streaming services, and theme parks are among the many businesses that could seek contractual remedies because of Tuesday’s Amazon Web Services outage. But would they prevail? As with most cloud outages, that depends on the underlying facts pertinent to the provider’s terms.

In the default service level agreement (SLA) governing some of the affected services, Amazon guarantees minimum uptimes. In line with industry standards, the sole remedy for downtime is a service credit which, depending on amounts paid, could be significant. The table below depicts available credits and other relevant terms from the Amazon Compute SLA. 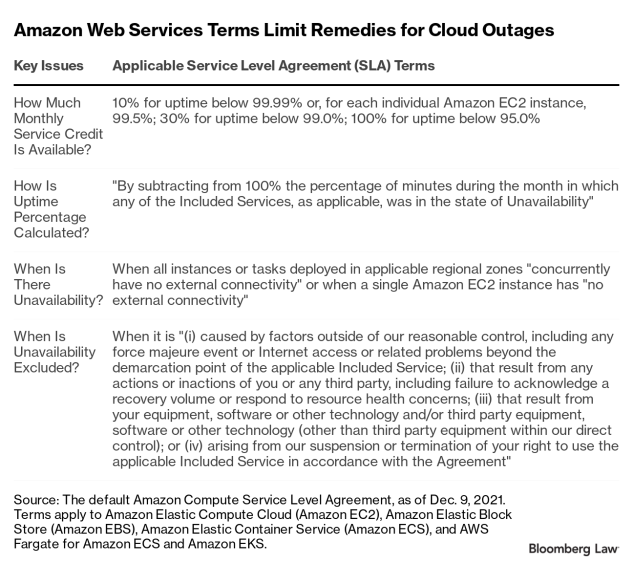 Assuming Tuesday’s outage began at roughly 10 a.m. EST and lasted through 7:35 p.m. EST, at which time Amazon marked the uncovered “network device issues” as resolved, it would have lasted more than 9 hours. But major disagreements could arise as to how downtime is calculated, potentially leading to class action lawsuits. The difference between a 10% and 30% credit could come down to a matter of minutes. Many IT executives and their counsel are likely already working out the most favorable ways of doing the math.

Moreover, what is “unavailability?” Per the SLA, it means having “no external connectivity.” But although Amazon acknowledged service issues via its dashboard, it labeled affected services as experiencing “degradation,” rather than displaying its dreaded red “service disruption” symbol.

Amazon also suggested that customers try logging in through a different regional endpoint. If such a workaround was in fact possible, Amazon could argue that service, while patchy, was technically still available.

And even if the outage did result in measurable downtime, Amazon’s SLA excludes, among other things, unavailability caused by circumstances outside of its “reasonable control.” In other words, those “network device issues” might not count toward any credits whatsoever if they were caused by an external bad actor.

Stay tuned as the facts continue to roll out.