Spinning the focus from targets to activists, the first quarter of 2021 had a noted front-runner in the race to gobble up value: Las Vegas-based holding company Ault Global Holdings Inc. topped the list of activist investors by number of campaigns with six, based on data from the Bloomberg Terminal. And spinning the globe, keeping an eye on foreign investors might illuminate additional stress factors in sectors already challenged by the economic impact of the pandemic.

Ault invests in companies it considers to be undervalued or underperforming in the technology, defense, aerospace, telecom, medical, crypto-mining, hospitality, textile and corporate lending markets. During the first quarter, Ault took positions in companies such as SilverSun Technologies, Inc. and MoSys Inc. 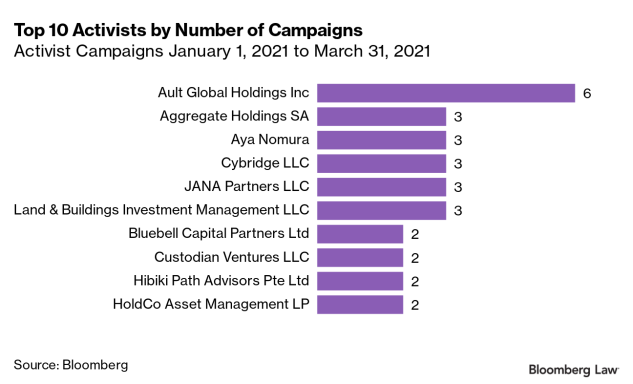 JANA Partners LLC, a New York-based fund founded by Barry Rosenstein in 2001, regularly appears on the most active investor list. JANA Partners engaged with Laboratory Corporation of America Holdings (Labcorp), TreeHouse Foods, and Encompass Health during the first quarter of 2021. In response to JANA’s engagement, TreeHouse agreed to name two independent directors, one a JANA nominee and the other nominated by mutual agreement, to its board. The private-label food company also entered into a cooperation agreement with JANA Partners, under which each party agreed to refrain from making “any statement or announcement that relates to and constitutes an ad hominem attack on, or otherwise disparages” the other.

In its campaign with Labcorp—one of the top ten targets in the first quarter by market cap—JANA seeks to name an undisclosed number of directors to the clinical laboratory company’s board. According to a Feb. 23 Bloomberg News report, JANA met with several Labcorp investors to discuss ways to maximize value for Labcorp shareholders.

Aggregate Holdings SA, based in Luxembourg, invests primarily in companies doing business in Germany, Austria, Switzerland and Portugal. Aggregate has significant holdings in the German-speaking real estate market. So far in 2021, Aggregate has taken positions in Austrian commercial real estate companies Immofinanz, S Immo AG and CA Immobilien Anlagen (“immobilien” is the German term for real estate), but commercial real estate firms may find out the Luxembourgish activist could become more mobile in the U.S. and elsewhere.