3M Combat Arms Earplug products liability multidistrict litigation (MDL) now has the most actions of any MDL ever. And, as plaintiffs claim these earplugs were standard military issue for more than a decade, this may only be the tip of the iceberg.

According to reports from the U.S. Judicial Panel on Multidistrict Legislation, including the most recent Oct. 15 MDL Statistics Report, the IN RE: 3M Combat Arms Earplug Liability Litigation MDL has amassed 203,722 total actions since its 2018 inception, surpassing IN RE: Asbestos Products Liability Litigation, which has been pending since 1991. 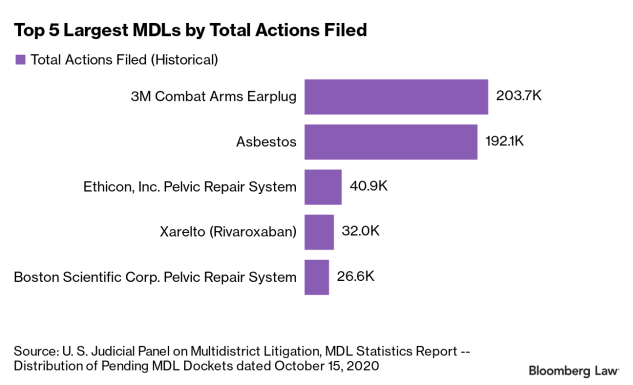 The 3M earplug litigation has its origins in a 2016 dispute under the False Claims Act between 3M and plaintiffs Moldex-Metric Inc. and the United States. In that case, 3M’s subsidiary, Aearo Technologies, allegedly supplied defective earplugs to the U.S. military, falsely certifying in response to the Request for Proposal that the earplugs met the requested medical standards, knowing they did not. In 2018, 3M settled that case for $9.1 million without admitting liability.

Thereafter, soldiers began filing products liability claims against 3M. And, because these claims involved common questions of fact, the MDL Judicial Panel transferred them to the U.S. District Court for the Northern District of Florida to be litigated as an MDL. In that centralized case, Judge M. Casey Rodgers gave the plaintiffs a win, ruling that 3M was not entitled to immunity as a government contractor. Judge Rodgers also set the first bellwether trial for April 5, 2021.

This may be only the beginning. With the military’s extensive use of the Combat Arms Earplugs and 3M’s lack of immunity, these claims will likely increase ahead of that trial. If the bellwether trial is then successful, cases could skyrocket.