The impressive number of M&A deals that made it to the finish line and closed in 2020, as well as a typical number of deals that fell apart, are both causes for optimism in 2021. Together, they paint a picture of how resilient and persistent the M&A market and deal makers have been amid this pandemic.

Last year, a total of 7,156 mergers and acquisitions deals valued at $1 million or greater resulting in control of the acquired company or assets were successfully completed. Consistent with the overall lower level of deal activity last year, this number of completed transactions marks an 18% drop from 2019’s total.

But 2020’s deal completions are still notable, considering the extraordinary hurdles to successfully closing deals that arose as a result of the pandemic in 2020. Beyond illness, there were travel restrictions, social distancing, business disruptions, and market volatility—all serving to cause delays in due diligence, interference with critical in-person meetings between parties (including, of course, physical closings), valuation dilemmas, and even the complete loss of the rationale for the contemplated transactions. 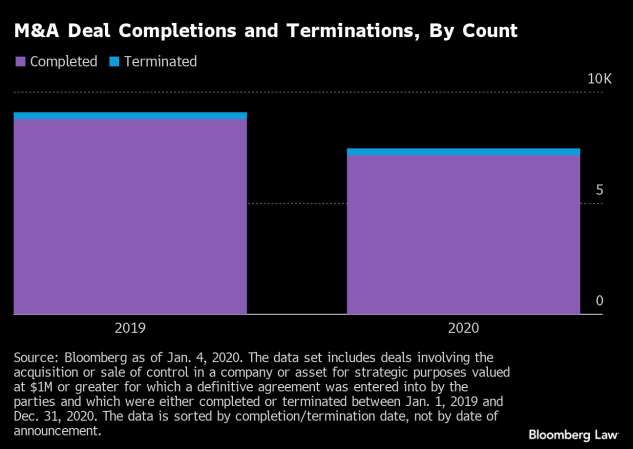 The monthly data show that, in addition to an end-of-year rush in deal announcements, December also saw a rush in deal closings. A total of 952 deals closed last month—the second-highest number of completed deals for any month in the past two years, and a number reassuringly close to 2019’s December monthly total of 1,085. 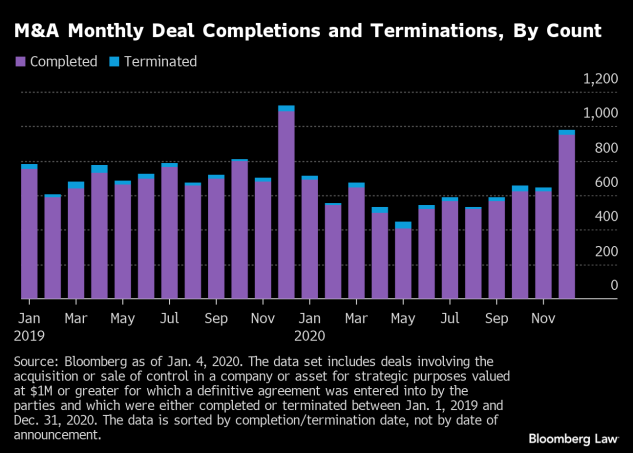 As for deals that were terminated after a definitive agreement was entered into by the parties, 2020’s number is also a reason to be hopeful. A total of 305 mergers and acquisitions deals valued at $1 million or greater for the control of the company or assets to be acquired were terminated last year. That’s lower than the total number of deals terminated in 2019, and, as a percentage of all completed and terminated deals combined, represents only a modest increase of less than 1% in terminated deals compared to 2019. 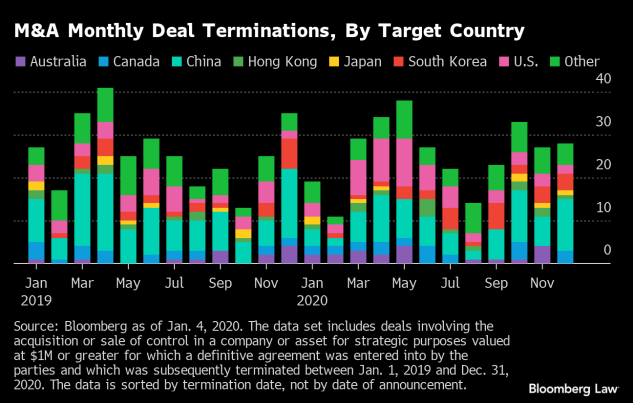 Behind these hopeful 2020 numbers were remarkable efforts and strategy shifts on the part of deal makers to adapt to the challenges of the crisis—all of which they will also need this year too, as the pandemic continues on and evolves.

With assistance from Jacquelyn Palmer.