Quarterly investment in legal tech companies reached new heights in the third quarter, with nearly $700 million in disclosed funding to legal tech firms. Q3’s results mean that funding of legal tech in 2019 has exceeded the $1 billion mark well ahead of year’s end.

2018 was a record year, with legal tech investment hitting $1 billion. As Bob Ambrogi pointed out, half of that $1 billion was attributable to a $500 million investment in Legal Zoom. After 2019 Q3, it’s clear that this year is seeing large-dollar investment in a wider diversity of legal tech firms.

The strong Q3 total , which is based on an analysis of Crunchbase data and other reports on the sector, might be slightly understated. Some companies with applications in legal, such as artificial intelligence or SaaS companies, are not designated as “legal” by Crunchbase, and thus could have been missed in this roundup. And nine additional funding rounds, in Axiom (U.S.), a360inc (U.S.), CodeLex (Singapore), digitalCounsels (Switzerland), iCONECT Development (U.S.), Legal Utopia (U.K.), LexFox (Germany), orthodox.ai (U.S.), and Usercentrics (Germany), were for undisclosed amounts.

Legalist seems to be both access-to-justice-focused and commercially minded. It approves funding for individual plaintiffs, but is also targeting law firms seeking advances on pending settlements. The startup targets the “middle market” of commercial cases: co-founder Eva Shang told TechCrunch that the company mainly funds cases that require less than $1 million. Retired 7th Circuit Court of Appeals Judge Richard Posner joined Legalist as an advisor earlier this year as part of his professed mission to increase access to the court system.

Validity Finance adds its $50 million Q3 investment to the $250 million it raised in June 2018. The company is less explicit about the dollar values of cases it funds, but it is focused on commercial litigation. Its founder/CEO and several key upper managers previously worked at Bentham IMF, a large public litigation funder.

One significant funding round doesn’t appear on the top 10 list: legal staffing provider Axiom accepted an undisclosed investment from Permira Funds in September. The investment was notable because the company had announced in February that it was spinning off two business lines to prepare for a public offering. Axiom shed contract analytics service Knowable and legal process consultancy Axiom Managed Solutions to get down to its core business of on-demand legal talent.

Incidentally, Permira Funds is the largest stakeholder in LegalZoom—they acquired a $200 million majority interest in 2014 after LegalZoom scrapped plans for an IPO in 2012 due to valuation concerns.

In a smaller deal, Wilson Sonsini co-invested $4.2 million in Lexion, an AI-powered contract analysis startup. It’s not uncommon for a law firm to invest in a legal tech startup; some firms, however, elect to “invest” by developing their own in-house tech to market to clients and others. Wilson Sonsini is doing both—it launched SixFifty, a legal tech software subsidiary that develops legal process tools, in February.

Another example of how Wilson Sonsini is out ahead on tech engagement: in August it became the first major law firm to start using transactions platform Doxly to automate document signing and closings for an entire practice (its emerging companies group). 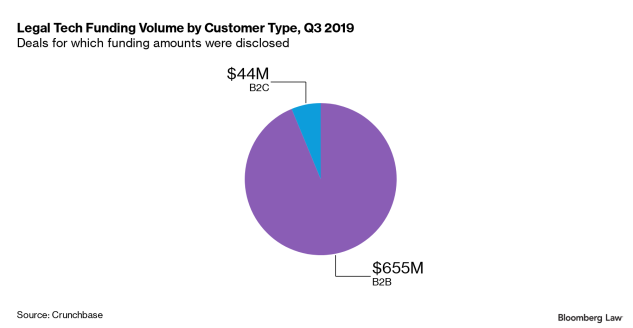 For all the talk about how legal tech can enable greater access to justice, it’s clear that investment interest is greater in the B2B segment of this market. Companies that market their services to law firms and companies are simply raising more dollars than those that target justice solutions to individual consumers.

Only two B2C companies were in the top 10 for legal tech investments in Q3. Notarize, an e-notary app that markets to individuals and businesses, received $36.9 million from lead investors Realogy Holdings, Polaris Partners, and homebuilder Lennar Corporation. While Notarize markets to individuals, the interest from real estate investors suggests more about Notarize’s aims in the B2B space going forward.

That’s not to say that B2B legal tech companies have done nothing for access to justice. For example, Clio, the law practice management software that received a $250 million investment in Q3, provides legal practice management and client engagement tools aimed at solo and small law firms.

Clio’s CEO and co-founder, Jack Newton, said in a statement accompanying the investment, “Over three-quarters of legal problems don’t receive legal assistance, yet lawyers are struggling to find new clients—it’s clear that something in the system is broken.” Clio’s system focuses on “unlocking new efficiencies and entry points to legal services,” in part for the purpose of “[making] legal services more accessible,” Newton said.

Whether Clio’s tech is translating into lower rates and greater access for clients is unclear, but companies like Clio are certainly creating efficiencies for small law. 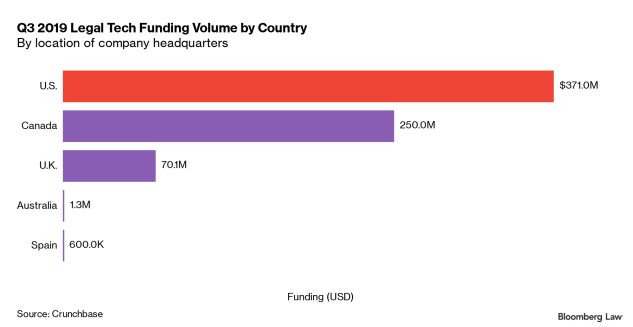 Litera Microsystems, the document drafting and management software company that was sold in May to Hg Private Equity Group, closed two acquisitions in Q3: of Workshare, a competitor document platform, and Doxly, which makes transaction management software. Litera’s CEO Avaneesh Marwaha said of the Doxly deal that it would “extend the key attributes of our products to the transaction space.”

Another big deal in Q3: Thomas Reuters’ acquisition of legal and regulatory collaboration platform HighQ, which currently has more than half of the Global 100 firms as customers, according to a TR press release. The HighQ platform enables collaboration between law firms and in-house legal, its CEO and founder Ajay Patel said in a statement. TR is aiming to sell the workflow tool to more large and mid-size law firms and corporate legal departments.

Finally, not on-list because it’s a joint venture, Lexis Nexis announced it is partnering with Knowable, the Axiom spin-off. Knowable is a machine learning-based contract review and analysis tool and, according to Artificial Lawyer, represents Lexis’ first move into legal AI doc review.

Did we miss a big deal in Q3? Have other thoughts on legal technology investment’s impact? Email me at mmcevoy@bloomberglaw.com or connect with me on Twitter: @megmcevoy.