Some of America’s largest food companies are finally feeling the pinch with restaurants across the U.S. remaining closed for weeks as a result of the coronavirus pandemic.

After weeks of consumer hoarding, panic buying is abating and the lack of demand from shuttered restaurants, schools and coffee shops is starting to set in. Sanderson Farms Inc., the U.S.’s third-largest chicken producer, is slowing production at plants that supply restaurants, and protein giant Cargill Inc. has idled an egg facility due to the lack of demand from the food services industry. 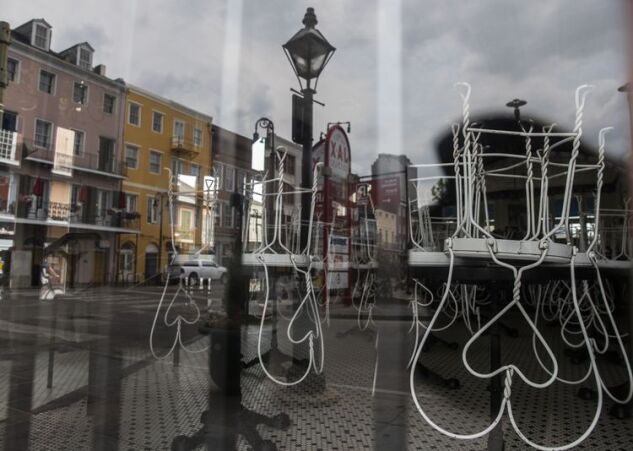 Chairs sit on tables in a closed restaurant in New Orleans on April 8.
Photographer: Sophia Germer/Bloomberg

Americans spend more than half of their food budget eating out, and an increase in retail among grocery stores can’t fully compensate for the lack of demand from restaurants. Every 10% decline in out-of-home food spending translates into a gain of just 3% in the retail channel, according to Rabobank, one of the largest lenders to the food and agriculture industry.

Nowhere is the effect of restaurant shutdowns more obvious than in the dairy industry, with almost 50% of American cheese production going to food services. Farmers in top-producing Wisconsin are being asked to dump milk to boost low prices with overall demand for dairy products expected to drop 10% to 15% in the second quarter, according to Mary Ledman, a global diary strategist at Rabobank.

“You had this initial strong retail demand that muted the slow in food services demand,” Ledman said. “But once everybody had stocked their fridges and there’s not this panic buying, it’s just going back and filling the gaps. At the same time, we have seasonally increasing milk production. So, for the dairy sector, it was really this perfect storm.” 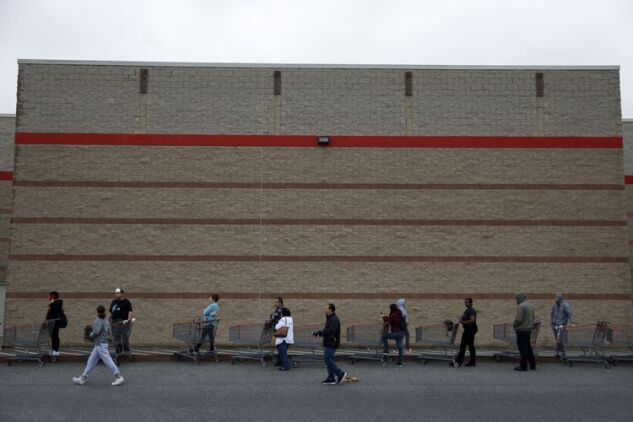 Shoppers wait in line before the opening of a Costco location in Hawthorne, California on March 14.
Photographer: Patrick T. Fallon/Bloomberg

Consumers have stocked up and are now going back to more normal purchasing patterns. U.S. packaged food sales rose 24% year-over-year for the week ended April 4, slowing from a gain of 32% a week earlier, according to analytics firm Nielsen. Ready-to-eat soup sales slowed by more than 50% in the period, and similar declines were seen in semolina pasta and beans, Bernstein analysts said in a report.

Curbs on the number of visitors per store are also impacting sales. Costco Wholesale Corp. said limits placed on its operations to cope with coronavirus-related demand slowed the pace of sales in the back half of last month. Walmart Inc.’s same-store sales 2% in the week ended April 11, according to Johnson Redbook, provider of a closely-watched retail sales index.

“The grocery experience has really changed,” said Sylvain Charlebois, a professor and senior director of the agri-food analytics lab at Dalhousie University in Halifax, Canada. “The pace, the flow, of people in stores has significantly reduced to comply to physical distancing policies. You cannot allow more than a certain number of people in a store at a given time.”

The decline in store sales comes at a time when prolonged shutdowns are weighing on restaurants. Many have even stopped take out and delivery. The restaurant industry lost $25 billion in sales and eliminated 3 million jobs between March 1-22, with 3% of establishments permanently closed and another 44% temporarily shut, according to the National Restaurant Association.

A three-month lockdown will result in $225 billion in lost sales and job cuts of 5 million to 7 million people, the group said in a March 18 letter to the White House.

Sanderson Farms said earlier this month that the lack of demand has forced it to slow down plants that produce the big birds that usually go to the restaurant industry. Cargill idled its Big Lake, Minnesota, egg plant and temporarily laid off workers due to the lack of demand. The facility supplies mostly the North American food services industry.

Prices for chicken wings have taken a hit from the lack of sporting events and the pork industry is also under pressure, with some 25% of production being sold through food service outlets, according to David Herring, a hog farmer and board member for the National Pork Producers Council.

“Demand was great for about 10 days, then it just stopped,” he said, adding that the biggest hit was to bacon, with 70% being consumed out of home. “We’re basically producing 425,000 hogs a week that there is no market for because of Covid-19.”

Even your daily cup of coffee could be hit as job losses mount and restaurants close, said , president of importers Wolthers Doque in Fort Lauderdale, Florida. Some coffee shop chains have already asked to delay their shipments to later this year. For instance, the coffee they were going to get in July or August, they now want it in the last two months of the year, he said.

“We are only going to feel this incredible low in sales sometime in the middle of summer,” Wolthers said. “The stores that closed and the volumes at hotel and restaurants and K-cups were not sold, and this will show in inventories building more than usual.”

Some companies are having to slow down or shut plants because they can’t easily turn them into facilities that produce for retail. For instance, a can of tomatoes that goes to restaurants is a different size from the ones that hit supermarket shelves. Others are reluctant to invest in changes that will only yield returns during the pandemic lockdowns, before things get back to normal.

The effects of the coronavirus are likely to be long-lasting as people lose their jobs and recession sets in. More than 10 million Americans have already claimed unemployment benefits since the pandemic started.

“People will trade down and people won’t go out as much,” said Charlebois, the Canada food professor. “A month ago, buzz words related to food were things like plant-based, sustainability, animal welfare, now it’s about shelves, supply chains. It’s completely changed everything. People are more concerned about putting food on the table than anything else. That really changes the mindset.”

To contact the editors responsible for this story:
at ldoan6@bloomberg.net