Get ready for what could be the most jarring stretch of corporate bankruptcies in memory. The coronavirus has crushed the life out of some venerable household names.

For many troubled companies, like luxury retailer Neiman Marcus Group Inc., which filed on Thursday, the lockdown super-charged the effects of pre-existing problems like debt overloads and the inability to please fickle consumers. For others, the debt they rack up while the pandemic rages may prove insurmountable once the health threat is over. 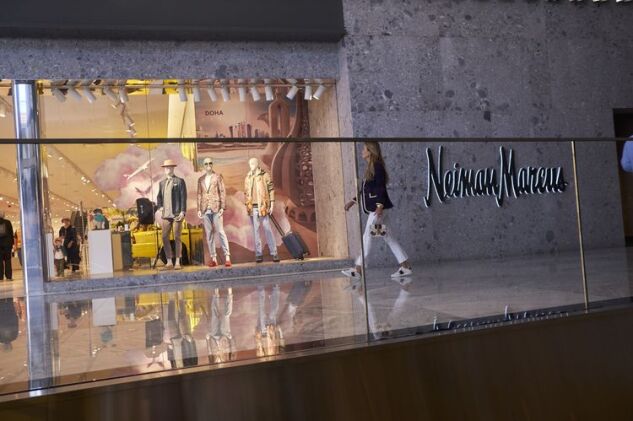 Few industries have been spared.

“Everyone’s distressed watch list has become so big that it doesn’t even make sense to call it a watch list -- it’s everyone,” said , head of debt advisory and restructuring at PJ Solomon, which tracks the financial well-being of hundreds of companies using a color code. “You turn page after page and it’s all red. It’s a sea of red.”

The numbers look nauseating and will probably get worse before they improve. Here’s a sampling: The amount of debt classified as distressed in the U.S. surged 161% in just the last two months to more than half a trillion dollars. In April, corporate borrowers defaulted on $35.7 billion of bonds and loans, the fifth-largest monthly volume on record, according JPMorgan Chase & Co. And so far in 2020, the pace of corporate bankruptcy filings in the U.S. has already surpassed every year since 2009, the aftermath of the global financial crisis, Bloomberg data show.

Even the bankruptcy process has been complicated by the virus, with social distancing making it impossible for companies to conduct that may keep them in operation and save jobs. 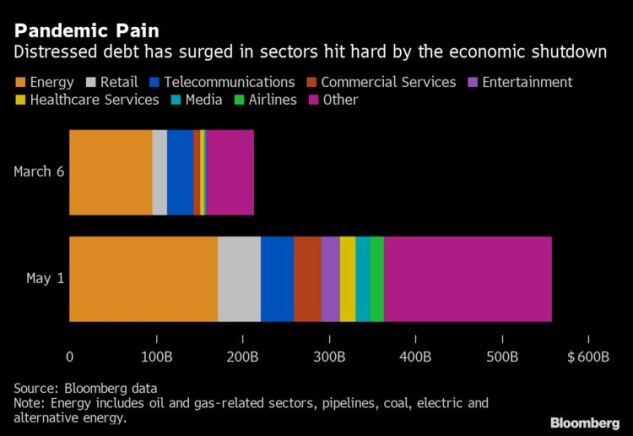 And though Washington is tossing out life preservers to select industries -- a total of $19.4 billion in federal aid has been doled out to the four biggest U.S. airlines -- the flood of filings is expected to continue.

, BlackRock Inc.’s chief executive officer, said this week on a with investors that he wondered if the needed to do more to stem a bankruptcy cascade.

The wave of post-virus bankruptcies kicked off April 1 with shale driller Plummeting demand for oil and a Saudi-Russian price war nudged the company onto the ledge. Crude prices hovering around $20 a barrel pushed it off. The company didn’t immediately respond to requests for comment.

was one of the biggest telecom reorganizations since in 2002. A combination of $17.5 billion in debt and a bet that customers would keep using land lines led to its April 15 .

“So far, the vast majority of bankruptcy cases we’ve seen are cases that would’ve come anyway,” said , partner and head of the restructuring group at investment bank Perella Weinberg Partners. “Maybe they’ve been accelerated as a result of the Covid-19 environment, but I think we would’ve expected them to occur irrespective.” 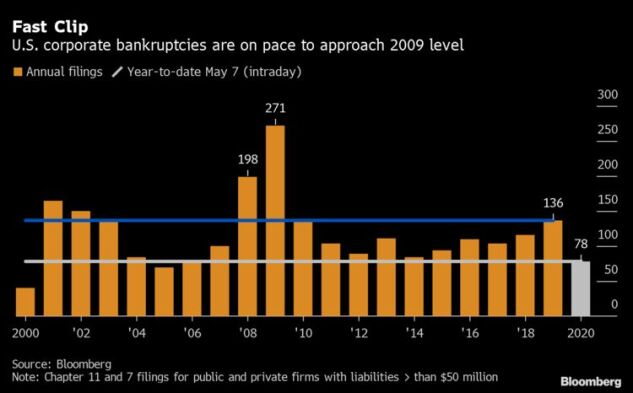 and Neiman Marcus were fat with debt from leveraged buyouts when the pandemic hit.

J. Crew had been acquired in 2011 by and . The private equity firms’ stake will be wiped out through a debt-for-equity swap in the bankruptcy, May 4.

The future of its 181 J. Crew stores worldwide, its 140 Madewell stores and its 170 factory stores, along with 13,000 employees, is . About 11,000 have already been furloughed during the shutdown. The company said it’s “hopeful that jobs will be minimally impacted when stores reopen.”

Neiman Marcus, sold in 2013 to and the , tried to spend more to lure customers while taming its debt. Success was mixed. When it Thursday, the chain was close to a to hand over control of the company to creditors led by bond shop

For Gold’s Gym, 2019 was the strongest year for worldwide growth in its 55-year history, the company said. Then came Covid-19. 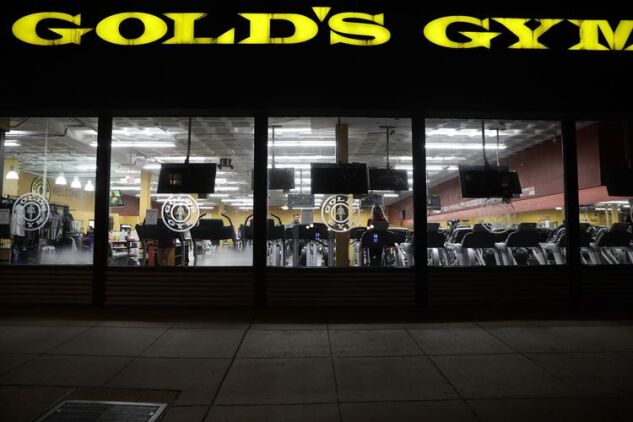 “This has been a complete and total disruption of every one of our business norms, so we needed to take quick, decisive actions to enable us to get back on track,” the company said in an online statement that accompanied its May 4 bankruptcy filing.

Gold’s Gym said it will complete its pre-negotiated Chapter 11 process by August. Though it permanently closed 30 locations, about 700 will be ready to open as stay-at-home rules are relaxed, it said.

“We’re absolutely not going anywhere,” the company said on its website.

Men’s fashion brand , makers of a $3,000 shearling coat (on sale), filed for bankruptcy Wednesday. It said in its first-day declaration that its decline began in 2015, but said its business was poised for a comeback when the coronavirus had a “debilitating effect.”

To make matters worse, fell 12% in the first half of April compared with March. If that trend continues, it could further injure Hertz, which uses sales of its existing fleet to fund its newer cars. 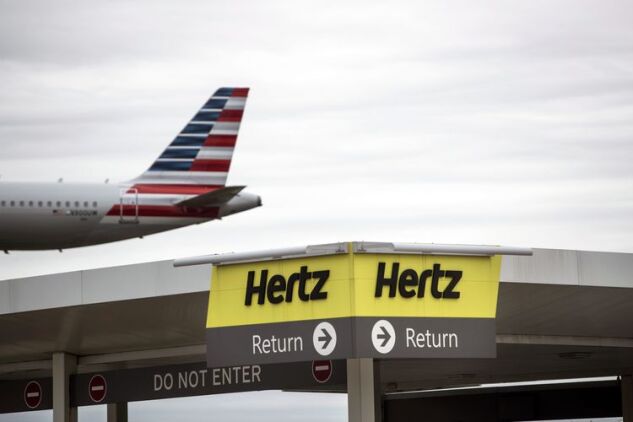 The 118-year-old J.C. Penney Co. has nearly 850 stores that have all with no set date for reopening. The company skipped an interest payment April 15 and is preparing to file for bankruptcy in the absence of a rescue.

“Many companies aren’t paying rent or vendors either right now, so they’re just accumulating liabilities to deal with later,” said Perry Mandarino, head of restructuring and co-head of investment banking at

As the coronavirus continues to spread, a new wave of debt has come up for sale.

Cruise operator sold $4 billion in bonds in April and the major U.S. airlines combined have issued at least $5 billion so far.

Carnival attached to its issuance a coupon of 11.5%, one of the highest ever offered by a company with an investment-grade rating. The company didn’t immediately respond to requests for comment.

The borrowers may be setting themselves up for future failure, said Meghji of M-III Partners.

“There’s a large universe of companies that have been massively affected by Covid-19 and it’s unclear whether the slope of recovery will be fast enough for them to avoid bankruptcy,” Meghji said. “The debt they are taking on now will put that much more pressure on their finances going forward.”