Farmers make up only a portion of the Wichita, Kansas-based bankruptcy attorney’s work. But demand for his services in Chapter 12 filings, a specific area of bankruptcy law mostly for family farming, has accelerated as consecutive years of a farm economy downturn has hit Midwest farmers especially hard.

“Almost every one of my clients has done some things in the months and years before I meet them to avoid the situation,” said Lomas, a member of Klenda Austerman LLC’s bankruptcy and corporate reorganization practice group who still spends time tending to his family’s generations-old cattle herd. “Farming is their life and a lot of the time it’s all they’ve ever known.”

His business uptick reflects a nationwide rise in Chapter 12 cases, which allows family farmers and fishermen to reorganize their finances without liquidating or losing their business. The 580 Chapter 12 cases filed during the 12-month period ending in September represents a 24% year-over-year increase, the highest levels since 2011, according to the American Farm Bureau Federation.

“Uncertainties in both the trade and commodities markets make this an ideal time to reset Chapter 12 before a crisis arrives,” Robert J. Keach, co-chair of Bernstein Shur’s business restructuring and insolvency practice group, told a House panel in June. 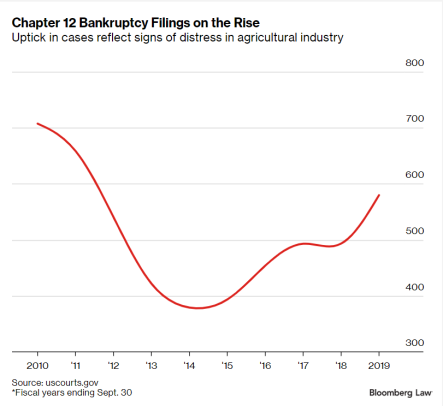 A recent bankruptcy code change could lead to even more Chapter 12 filings.

President Donald Trump in August signed the Family Farmer Relief Act (FFRA) after the bipartisan legislation easily cleared both chambers of Congress. The law lets more family farmers take advantage of Chapter 12 bankruptcy by increasing the maximum amount of debt they can hold at the time of filing from about $4.2 million to $10 million.

In promoting the bill, lawmakers pointed to the growing cost of farming and external pressures on the agricultural industry. The law would help more family farmers come out from under crushing debt and maintain control of their businesses, they said. Interest groups such as the Farm Bureau and the National Farmers Union (NFU) supported the bill.

The new law means that people who had not previously considered Chapter 12 “can now look at that as an option,” Farm Bureau chief economist John Newton said.

Only a small percentage of struggling farmers owe between $4.2 million and $10 million, but the debt cap increase is likely to contribute to more chapter 12 filings, NFU government relations director Matt Perdue said.

“We expect that trend to continue,” he said, referring to the recent spike in farm bankruptcies.

Struggling farmers could also benefit from the cap increase without ever filing for bankruptcy because it gives them some leverage in out-of-court negotiations with lenders, Lomas said.

Global trade had been a boon for American farmers seeking broader markets abroad. But China has responded to the Trump administration’s trade war by restricting U.S. farmed good exports.

The U.S. Department of Agriculture has forecast that the value of farm exports to China this year would fall to $9 billion from $16.3 billion last year, in large part due to retaliatory tariffs.

Trade issues and a lower global demand have also driven down prices, leading the USDA to project that total agricultural commodity receipts for 2019 would fall by $2.4 billion compared to the year before.

Chapter 12 filings also could continue to increase in states like Kansas and Nebraska if a land value decline persists, Ani Katchova, a professor who chairs a farm economics research program at Ohio State University.

Still, the number of bankruptcies is a lagging indicator of the overall farm economy, she said. And some signs could point to a possibly brighter outlook for farmers.

Bankruptcy is a useful tool for overleveraged farmers to get back on their feet, but remains a last resort fix. Annual federal government aid, which many distressed farmers rely on to stay afloat, is projected to increase this year.

Farmers this year would receive about $19.5 billion in direct government payments, a 42.5% increase from 2018, the Department of Agriculture projected at the end of August.

The estimate was made just a month after the Trump administration announced a $16 billion aid package as the nation’s trade dispute with China persists.

Trade aid payments, disaster assistance, federal subsidies and insurance payments will account for $33 billion of a projected $88 billion in net farm income this year, the Farm Bureau said in October.

The Trump administration is now banking on a new trade deal with Japan to increase agricultural sales to the Asian country to help troubled farmers. One of the chambers of the Japanese Diet last month approved the new deal, which promises to increase U.S. farm exports.

Farm businesses also await approval of the U.S.–Mexico–Canada Agreement, a purported replacement for NAFTA that is still being debated on Capitol Hill.

The administration claims the new pact would help U.S. farm exports by opening up markets across the continent, especially for dairy, poultry, and egg suppliers. Some U.S. farmer advocates support the current version of the new pact.

“Resolving global trade conflicts is obviously critical to that,” he said.

To contact the reporter on this story: in New York at awolf@bloomberglaw.com