, the operator of two dozen hospitals and outpatient facilities in 14 states, filed for bankruptcy as the flood of coronavirus patients puts pressure on the already-shaky finances of health-care providers throughout the U.S.

The health-care chain cut a deal with its lenders to slash debt by about $500 million through a Chapter 11 filing, according to a . The bankruptcy filing, which came just a week before a was due, will allow Quorum to keep its doors open and continue treating patients.

Under the plan, noteholders owed $400 million would get 100% of the equity in the reorganized hospital chain, wiping out existing shareowners. Some noteholders, including Davidson Kempner Partners, and York Capital Management, have agreed to put $200 million into the Quorum once it exits bankruptcy in part to reduce debt, according to a regulatory . There’s also a $100 million bankruptcy loan from certain existing noteholders. 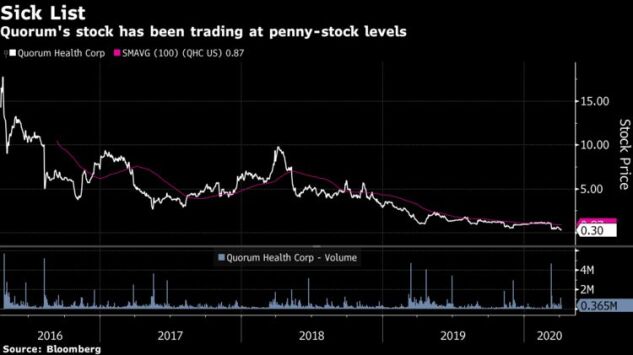 The company has struggled since it was created in 2016 through a spinoff of 38 hospitals from , another troubled operator. Based in Brentwood, Tennessee, Quorum now operates 24 facilities with about 2,000 beds in rural and mid-sized markets, including many in the South and Midwest, where the spread of virus is now ramping up.

“Since day one post spin, Quorum’s earnings base has never been able to support its capital structure,” Bloomberg Intelligence analyst said. “While years of portfolio rationalization have improved the quality of assets in the portfolio, there’s a way forward now less burdened with debt.”

The chain’s bankruptcy may mark the start of massive woes for American hospitals, especially in less populated areas like the ones served by Quorum. Even before the coronavirus hit, hospitals were losing profitable elective procedures to outpatient facilities, while still handling emergencies and walk-ins who lack good insurance.

Now as medical centers cancel optional treatments to spare resources for coronavirus victims, their slim revenue margins are being further squeezed, and federal relief may not be quick or abundant enough to save them. More than 30 facilities went bankrupt last year.

Quorum recently acknowledged in a regulatory filing that bankruptcy was possible. “Regardless of the path forward the company chooses, Quorum Health and its hospitals will continue to maintain all operations without any interruption to service,” Chief Executive Officer said in a statement to Bloomberg before the filing.

Quorum hasn’t posted an since its founding, and investors have long pressured the company to make changes as its finances suffered. Its due in 2023 are rated deep into junk and traded hands for less than 40 cents on the dollar after the bankruptcy filing.

Stakeholders include , York Capital Management Global Advisors LLC and . In a filing late last month, Mudrick expressed concern that the company hadn’t reached an agreement with lenders to avoid bankruptcy and said amending its existing credit agreement to provide a short-term bridge would be the best course of action.

KKR in December told Quorum it was willing to lead a recapitalization that would restructure the company’s debt load and pay shareholders $1 per share. In March, KKR said such a buyout seemed off the table and that, if there was to be a deal, it would likely come with little or nothing for equity investors. The stock, which topped $17 in 2016, has recently traded for less than 50 cents.

The company listed assets of about $373 million and debts of more than $1.2 billion in it bankruptcy petition in Delaware.

The case is Quorum Health Corporation, , U.S. Bankruptcy Court for the District of Delaware.

To contact the reporter on this story:
in New York at jhill273@bloomberg.net

To contact the editor responsible for this story:
at rgreen18@bloomberg.net