Those are just some of the almost $400 million of fees and expenses racked up by professionals working the bankruptcy of Stamford, Connecticut-based . The bills add up to more than half the amount that all individuals harmed by OxyContin would share under the drugmaker’s proposed settlement of personal injury claims.

Purdue’s financial woes have turned into a cash machine for the lawyers and consultants hired by the company and its creditors who are sorting through that the drugmaker fanned the flames of the U.S. opioid crisis. White-shoe law firms, premier restructuring advisers and investment bankers are collecting thousands of dollars an hour for their work on the case while those hurt by Purdue’s products await a payout -- as is the norm in corporate bankruptcy. 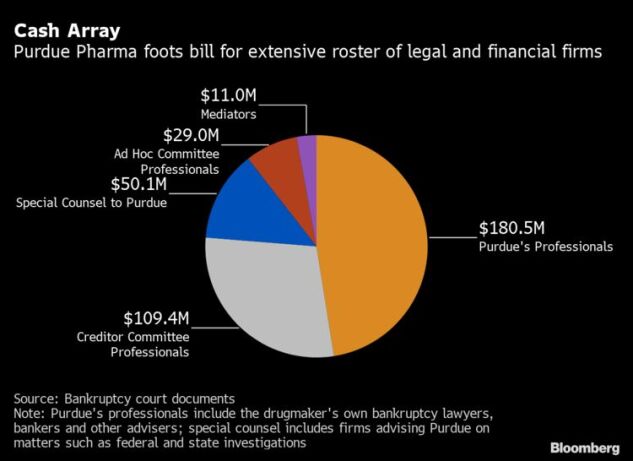 “These are huge -- this is a large chunk of money that would otherwise be going to pay victims of a horrible tort,” Bob Lawless, a law professor at the University of Illinois, said in an interview. “You have to pay the undertaker. Whether they have to be paid that much is another question.”

The fees shine a light on the harsh reality of corporate bankruptcy, where lawyers and consultants collect checks while creditors await repayment, often getting pennies on the dollar. Purdue is unusual because its biggest creditors aren’t vendors or landlords, but cities and states reeling from the opioid epidemic, as well as the people who lost everything, including their loved ones, to opioid drugs.

Purdue Pharma is paying market rates for professionals in the case, the company said in an emailed statement, noting that it’s responsible for the fees of multiple creditor groups.

“This is one of the most complex bankruptcies in history, and it merits seasoned and experienced counsel and financial advisers on all sides of the case,” the company said. Purdue is “moving as quickly as possible to deliver a settlement worth more than $10 billion” that would help abate the opioid crisis, the company said.

If and when Purdue’s bankruptcy judge approves the proposed , the drugmaker’s remaining assets will be handed to trusts for the benefit of states, cities and counties that have sued to recoup billions spent dealing with the U.S. opioid crisis.

There’s nothing illegal about lawyers and consultants getting paid during a bankruptcy. Anyone providing goods and services to a firm in Chapter 11 protection -- from electric companies to landlords -- is supposed to get paid in the normal course of business. The nature and hourly rates of the fees and expenses are similar to other bankruptcies, and restructuring professionals have to get court approval periodically for their bills.

Still, a close look at Purdue’s case reveals a startling divide between the haves and have-nots that arise from alleged corporate malfeasance. 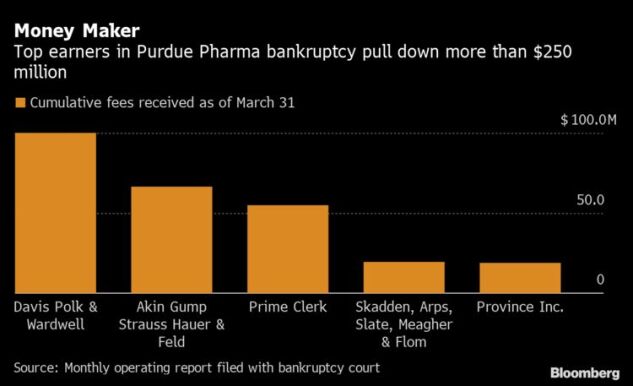 The case is awash with letters to Purdue’s bankruptcy judge, , pleading for compensation, or simply information, from Purdue. There’s a former professional baseball player, describing the “bone deep sorrow” he still feels after losing his son to an overdose years ago. Or the former Army doctor who says he suffered a debilitating stroke after getting hooked on opioids in 2018. Some notes are hand-written from jail by people who say there were addicted.

Individuals who filed personal injury claims have waited months for any kind of payout. They’ll eventually be divvied up using a points-based rubric, with the most points awarded for OxyContin deaths. Payments will likely range from $3,500 to $48,000, according to one estimate provided in court papers.

Meanwhile, Purdue’s lead bankruptcy counsel, Davis Polk & Wardwell, has been paid more than $100 million already for its work on the case, according to the latest operating report filed by the drugmaker. The New York-based firm is the top earner on a roster of more than 25 advisers getting paid by the bankruptcy estate.

The bills add up fast. In October of 2019 alone, a month after Purdue filed for bankruptcy, Davis Polk & Wardwell clocked nearly 7,000 hours on the case. That added more than for a single month, owing to a team of close to 100 legal professionals.

Separate from its fees, the firm billed Purdue for $64,000 of expenses that October -- mostly for computer research, but also taxis to and from court and over $5,000 for meals from likes of Just Salad and a Manhattan pizza joint. The firm also spent about $3,500 that month at Westchester County’s Ritz-Carlton, the nearest hotel within walking distance of the bankruptcy court in White Plains.

Davis Polk rented several conference rooms at the hotel, which allowed for meetings among stakeholders and saved money by cutting down on travel time, according to a person familiar with the matter.

Purdue’s list of advisers is a who’s who of restructuring power players, from investment bank PJT Partners to law firm Skadden Arps Slate Meagher & Flom. The consultancy AlixPartners has been paid $17.9 million for its work, in no small part for of billions of dollars out of Purdue to its billionaire owners.

Davis Polk, Skadden Arps, AlixPartners and PJT all declined to comment on their fees or didn’t respond to requests for comment.

Much of the expense can be traced to the stunning breadth of the case. Just informing the public was a monumental task: the company spent more than $20 million notifying potential creditors about a deadline to file claims. The was designed to reach nearly every U.S. adult about six times, court papers show.

More than 600,000 claims were ultimately filed against Purdue -- close to 10 times the amount lodged against , the investment bank whose bankruptcy accelerated the financial crisis of 2008. Prime Clerk, the firm tasked with notifying Purdue’s creditors and processing claims, has been paid more than $50 million for its work on the case so far.

Put simply, Purdue has a dizzying array of stakeholders. The drugmaker has been negotiating with U.S. states, the federal government, local governments, individual opioid victims and insurance companies, to name a few, over trillions of dollars in alleged damages.

“In these negotiations, you want someone who has a lot of experience, someone who is well-regarded and at the top of the profession,” Lawless said. “Those people are expensive.”

, Davis Polk’s lead partner on the case, is currently charging $1,790 an hour for his services, according to court papers. A lawyer for Purdue’s low-ranking creditors, of Akin Gump Strauss Hauer & Feld, is charging $1,655 an hour this year. of Skadden Arps bills out at $1,775 an hour.

The numbers are eye-popping, but have become the norm in the high-stakes world of Chapter 11 bankruptcy. , the California utility driven into bankruptcy by lawsuits, was paying about $1 million a day to untangle its liabilities.

“Traditionally, bankruptcy has had a spirit of economy. I think that spirit has long since passed,” said , a bankruptcy law professor at Georgetown University. “The bottom line is bankruptcy attorneys don’t see themselves performing a service in the public interest.”

To contact the reporters on this story:
in New York at jhill273@bloomberg.net;
in Wilmington, Delaware at dmccarty@bloomberg.net