On March 20 the streams of customers grabbing takeout bags and cocktails made the spare, warehouse-style space of Barbuto feel more vibrant than anywhere else in locked-down New York City. Chef-owner Jonathan Waxman surveyed what should have been the resurrection of his sit-down restaurant, which closed in 2019 to reopen in early February in the Meatpacking District. When New York restaurants were ordered to , Waxman pivoted to a takeout-only model with a staff of about eight people and a menu including signature dishes such as roast chicken with salsa verde and crispy smashed potatoes with pecorino, along with a handful of wines and cocktails.

“I saw the 1987 Black Friday crash, the AIDS epidemic, the Silicon Valley crash, then 9/11, then Hurricane Sandy. This feels more protracted than anything I’ve seen,” he said on that Friday in New York. “I’ve always said opening a restaurant is like going to war. I was wrong. This is war.” Waxman would lose the battle just five days later, when he chose to give up the take-away service. A spokesman said, “It’s the best decision for him and the team to stay safe and healthy, as well as for the guests.” 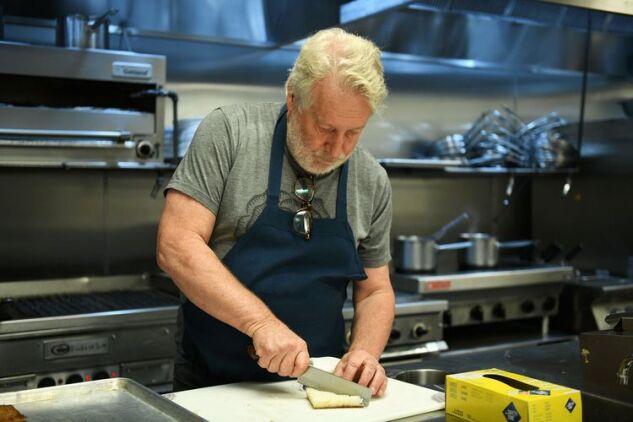 Across the Atlantic, Emma Reynolds—the co-owner of the Tonkotsu Group of 12 ramen shops—was also feeling besieged. Like New York, London is a town where the average citizen eats out several times a week. On March 16, that in response to the spread of the novel coronavirus, everyone should “stop nonessential contact” and avoid pubs, restaurants, and other public places. Immediately, business and income dropped.

Reynolds decided she’d keep her staff even as other restaurants laid off their employees. It took four days before the government announced a —paying 80% of worker salaries up to £2,500 ($3,000) a month. “We were all crying when we heard the news,” says Reynolds. “It was a huge relief after a most painful week.”

It’s nowhere near over: Johnson ordered the entire country—including restaurants—, and no one knows what the eating scene is going to be like when the pandemic ends. Reynolds herself hasn’t been well. One day, amid the worrying, she recalls, “I couldn’t breathe, and my hands and feet went cold. I had a bad headache, fever, and breathlessness.” She’s feeling better, but she hasn’t been tested.

The coronavirus pandemic is an apocalypse for the world’s restaurants. For London and New York, the anti-social effects of Covid-19 have a golden age of chefs and restaurateurs, who’ve for the past three decades transformed fine dining—or simply eating out—into a supreme form of urbanity and a measure of social status: You are where you eat.

Between the two cities, New York and London have almost 50,000 restaurants, ranging from hard-to-land reservations such as Momofuku Ko in Manhattan’s East Village and Core by Clare Smyth in London’s Notting Hill, to small but popular favorites like Wildair in Lower East Side and Black Axe Mangal in the London borough of Islington. Now almost every one of them has closed.

Union Square Hospitality Group, perhaps the most revered restaurant empire in the U.S., led by Chief Executive Officer —who also runs Shake Shack—was forced to lay off 80% of its workforce, or 2,000 people. The future is unlikely to resemble the past of just a month ago. In a note about the crisis to his staff posted on Instagram, Dan Barber, chef and co-owner of Blue Hill, quoted an unnamed cook in his kitchen who said, “This is the worst hard time.” 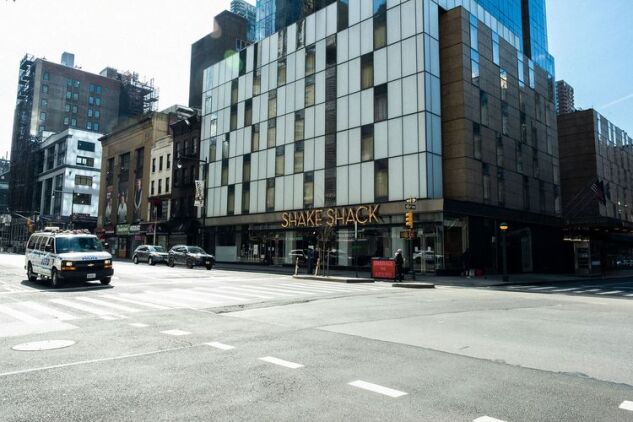 As they try to divine what the future holds, chefs and restaurateurs are addressing the emergency and supporting themselves and their employees in assorted ways, including GoFundMe accounts, takeout services, and filing lawsuits. In New York, Jeff Katz, owner and general manager of Crown Shy—a new restaurant that was one of the best reviewed in the last year—is part of a suit being filed in New Orleans that will try to force insurance companies to pay restaurant’s claims currently being denied because of a “virus exemption.”

Katz says he’s doing this for more than Crown Shy—because there is an immense supply chain that depends on restaurants. “It’s distributors, producers, farmers, cleaning services, branding, marketing,” he says. “The list is endless. If the restaurant industry falters it brings so much down with them.” The scope of the claims stemming from restaurant failures will be too big for the insurance companies to handle. “If we win, the government is going to have to bail out the insurance companies. Because there are billions and billions in losses to recover.”

Katz has been joined in his lawsuit by some of the country’s most famous chefs, including of The French Laundry in Napa Valley, of Restaurant Daniel in New York, and of Chinois on Main in Santa Monica.

While government bailouts will certainly be welcomed, the red tape that accompanies them, especially in the U.S., may further stymie any return to normalcy. President Trump has not been particularly encouraging. “I know the business very well,” he said on March 26. “It’s a very delicate business.” He continued, “They will all come back. It may not be the same restaurant or ownership but they will all be back.” Meanwhile, restaurateurs in both New York and London are turning to temporary measures to make money from their existing kitchens and inventory—and thinking about how to run a food business once the pandemic ebbs.

Jyotin Sethi, CEO of JKS, which has 16 London restaurants including the acclaimed Lyle’s in Shoreditch and Flor in Borough Market, is examining the conditions that will make people want to go back out to eat. “You need resolution from a health perspective,” he says. “Most people eat out three or four times a week in London, but that will change for a period of time—and that will have a massive impact on the U.K. restaurant business. If there isn’t a vaccine, will people be happy to go out? The challenge we are all facing is that the number of unknowns is huge.”

JKS had a home-delivery service called Motu but has shut it down. “When a national lockdown was announced the chefs were very nervous,” says Sethi. “We gave them the choice and listened to them. It’s a fine line between providing a service to the community and doing the right thing for people who are working for you. It is a question of safety.”

Amanda Cohen isn’t doing takeout and delivery either. She opened Dirt Candy, her vegetable-focused restaurant, on Oct. 29, 2008, during the financial crash. And Cohen stayed open despite the vicissitudes of New York business—moving from a well-reviewed hole-in-the-wall to a larger, shinier space on the Bowery befitting the gorgeous nature of her food—until March 14. “We’re not set up for takeout; we might revisit that,” she says.

She wanted her 30-person staff to stay home and didn’t see the benefit to selling food from a place whose specialty is tasting menus including the five-course Vegetable Patch. “I couldn’t figure out how to make it make sense.” The takeout business, so far, she says, is unpredictable for her friends in the business who are doing it. A place might make $1,200 a night, but nothing the next. 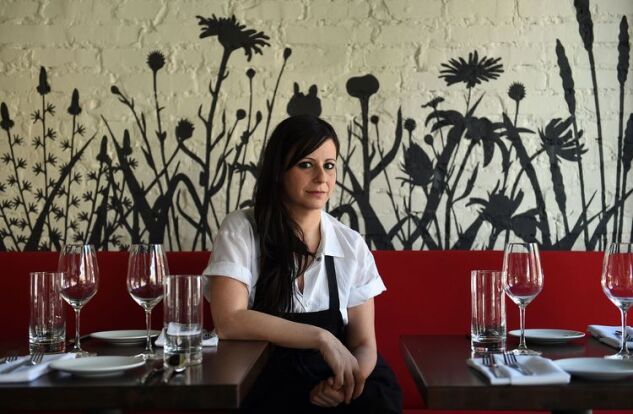 Cohen’s major concern is Dirt Candy’s monthly rent. She hopes that a government bailout will address that. “Will there be a rent abatement or just a deferment?” she asks. “If I cover the rent past April, that will seriously deplete my bank account.” Utilities, insurance premiums, and other expenses add up to thousands more dollars a month. “I don’t make that much money,” she says. “Our margins are already so thin.”

In London, chef Jeremy Chan of Ikoyi is taking a wait-and-see approach, too. The West African-inspired fine-dining restaurant in St. James’s Market near Piccadilly Circus shut down on March 21. He kept everyone on regular salary and planned to until April 3, when they would all go into “emergency” pay—everyone being paid the same amount in order to pay rents and live.

He’s heartened by the government’s decision to help with wages—which takes a huge burden off his and his business partner’s shoulders. Chan isn’t doing takeout or delivery. But he is trying to see if those services will be part of a post-pandemic Ikoyi. “A zero-contact delivery-and-takeaway system,” he says. “Thoroughly sanitized boxes, with our signature sauces ready to go, and a recipe card to help you put the dishes together. You show up at the door with a code and pick it up. No contact.”

Chan admits that’s all idle thinking for the moment. “I used to dream of a limitless holiday because I was in this high stress job,” he says. “Now that I have it and I’m disturbed by it, it’s not a holiday to celebrate. You’re not resting. You’re in limbo, with no end in sight.”

There are those who dream big, even amid the pandemic. Chef , the indomitable do-gooder and President Trump nemesis who’s fed hurricane and earthquake victims all over, has proposed mobilizing all the newly unemployed restaurant workers—he calls them “food first responders”—to feed vulnerable Americans. Andrés recommends allocating about $54 billion—the estimated amount of an airline bailout—for the effort he calls America Eats Now. The money would go toward feeding people employed in industries linked to restaurants—from farm workers to delivery people.

It would be wrong to underestimate Andrés. Vaughn Tan, an assistant professor of strategy and entrepreneurship at University College London, says the Spanish-born chef’s organization has responded to chaos and catastrophe with innovative thinking and flexible organization.

“Most people and organizations see the world and act through a risk mindset—an attempt to precisely calculate risks and thus achieve optimal outcomes, which is likely fatal under conditions of uncertainty,” says Tan, author of a book titled The Uncertainty Mindset: Innovation Insights From the Frontiers of Food, to be published this spring. “Acknowledging—instead of denying—uncertainty is what gives Andrés’s group the ability to create highly effective, rapidly scaling food relief operations under conditions that would defeat other relief organizations.” 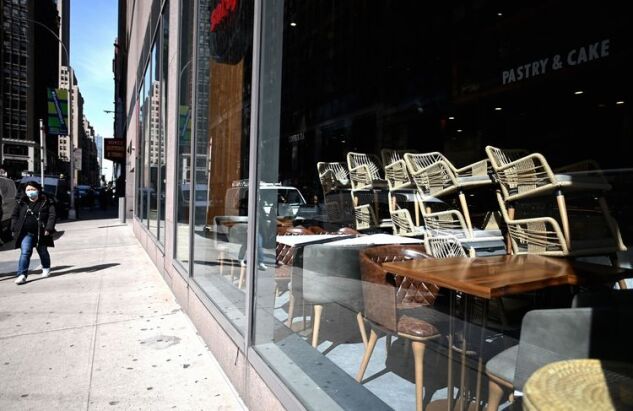 Chairs are stacked in a closed cafe in Manhattan on March 16.
Photographer: Johannes Eisele/Getty Images

For most other restaurateurs, the future is day to day—and most of the daily work is trying to cater to the people who would have been eating at restaurants but are cooking their own food now. Chan of Ikoyi has Instagram cooking classes for his followers as do many other major chefs, including Massimo Bottura of Michelin-starred Osteria Francescana, who’s called his show Kitchen Quarantine. Even , whose el Bulli in Catalonia (which closed in 2011) likely started the golden age of restaurants we’ve just lost, is teaching the homebound how to make vichyssoise via his Twitter feed.

Pam Yung, the head chef of Flor in London, notes hopefully that home cooks are taking an interest in breadmaking with local grains. “It’s great to see friends around the world making bread & pizza at home,” she wrote on Instagram Stories. “Attempting sourdough, buying quality grain. What if this became the new norm? A chance for a flourishing local grain economy? A deeper appreciation for where food comes from and how it’s made?”

Most industry people are holding out hope that a semblance of what was lost can be revived once people can leave their homes again. “When you are being locked down, there is no way people are going to say, ‘Wow, I don’t want to get out of the house,’” says , chairman and CEO of D&D London, which operates 43 bars and restaurants, mainly in London but also in New York and Paris. “We are all going to want to see our friends when this is over. We are all social animals.”

Rekindling that desire can still happen, as Emma Reynolds of Tonkotsu Group puts it, “as long as people can remember the joy of restaurants.”

To contact the editor responsible for this story:
at hchuaeoan@bloomberg.net