filed for bankruptcy after efforts to manage its crushing debt load unraveled amid the spreading coronavirus pandemic.

Creditors will take control of the luxury department store chain, according to plans outlined in a Chapter 11 petition filed in Houston. The move gives the Dallas-based chain a break by letting it stay in business while management works out a recovery plan.

The company, led by Chief Executive Officer , said it has support from a substantial majority of its creditors, who agreed to put up $675 million to get Neiman Marcus through the court process. They’ll also provide $750 million in exit financing.

When the company emerges from bankruptcy in early autumn, management expects to see about $4 billion cut from its existing debt load -- the legacy of a 2013 by current owners and the . Neiman listed debt obligations of about $5.5 billion in its filing.

The turnaround will be complicated by the fact that Neiman’s stores were and its workers to help stop the spread of the Covid-19 outbreak. Some of the stores have been partially reopened with the option for curbside pickup, according to a company . 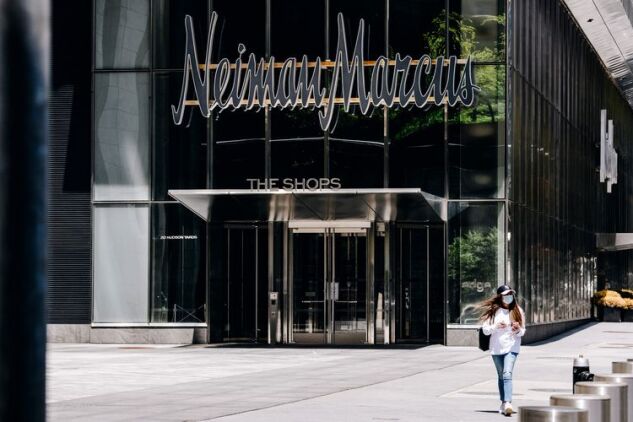 A pedestrian passes by a closed Neiman Marcus store in New York on May 5.
Photographer: Nina Westervelt/Bloomberg

Neiman Marcus manages more than 40 namesake stores across the U.S., two Bergdorf Goodman stores in Manhattan, about two dozen Last Call locations and a Mytheresa in Germany. The latter is a brick-and-mortar version of its fast-growing online merchant.

Most of the company’s department store rivals also suspended operations because of the virus, at a time when the whole industry was already ground down by years of shopper defections to online merchants.

Neiman has been trying to simultaneously spend more on luring customers while taming its debt load, with mixed success. The company reached a with creditors last year that put off the due dates on some of its debt to buy time for a turnaround.

It also shuffled Mytheresa to a place in its capital structure that put the business of creditors, creating hard feelings with some bondholders that . Mytheresa isn’t part of the Chapter 11 process and will operate independently, the company said.

Van Raemdonck, Neiman’s CEO, said in the statement the company was making progress on its turnaround before the coronavirus hit. “However, like most businesses today, we are facing unprecedented disruption caused by the Covid-19 pandemic, which has placed inexorable pressure on our business,” he said.

Neiman’s unsecured creditors list is a who’s-who of luxury brands including Chanel, Gucci, and , according to court documents. Neiman owes between $3 million and $8 million to some brands, records show.

The bankruptcy will give Neiman much-needed relief on payments to vendors, suppliers and landlords. Other retailers have sought similar protection from creditors, including which Chapter 11 earlier this week.

Both Neiman and J. Crew have struggled for years under the weight of heavy debt loads from leveraged buyouts, all while customers were defecting to online channels and specialized rivals. Then came the virus.

“Retail chains that were already in trouble before social distancing was even a phrase have been pushed over the edge by the pandemic,” said , a partner in law firm ’s restructuring practice. “Now, although rehabilitation rather than liquidation remains the stated goal, it appears that will be more challenging in the current retail environment.”

Neiman said it extended its closures of some stores until at least May 31, with customers still able to shop through its website and mobile app. In addition to the curbside service at some locations, the Atlanta and NorthPark Neiman Marcus stores are available by private appointment.

Neiman is better positioned than most U.S. department stores with a loyal customer base, distinct luxury space, and digital presence, said , managing director of GlobalData Retail. “There is a place for Neiman Marcus in the post-coronavirus world,” he said. “Once the debt has been eliminated, or at least reduced, there are reasonable prospects for survival.”

The debt overhaul won’t solve Neiman’s secular problems, with luxury brands selling direct to consumers and sales continuing to migrate online. “It will take a lot of creativity and imagination” to get through the restructuring, Saunders said.

Neiman told the court it has support from holders of 77% of its extended term loans, over 99% of the second liens, and more than 69% of the third lien notes to equitize their debt and backstop the bankruptcy loan and exit financing.

Guiding the process are lawyers from and investment bankers at The is providing financial advice.