As an investor in troubled companies, is accustomed to assuming the worst -- recessions, debt defaults, bankruptcies. The coronavirus pandemic has redefined his sense of dismal.

“Never in my career have I looked at an income statement and plugged a zero into the revenue line,” Mudrick said in an interview.

That’s the grim reality for dozens of companies shuttered by government fiat or shunned by people afraid of getting ill. Mudrick, 45, and his colleagues at in New York have scoured the credit markets and drawn up a list of more than 100 borrowers likely to be among the hardest hit by the economic paralysis: The casinos with no gamblers, hotels with no guests, restaurants with no diners and malls with no shoppers.

His playbook is the same as always: buy up debt in the hope of taking control as the business fails to make debt payments and is forced to restructure its balance sheet. Mudrick, whose distressed-credit hedge fund returned 22% in 2019, said he hopes to make as many as 10 new investments in the coming weeks. 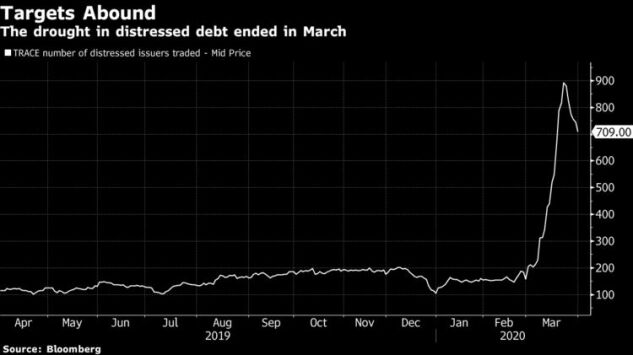 “We want to own these businesses through the loans,” he said. “If the market recovers, we’ll make some money and move on.”

Some of the names on Mudrick’s list were already hurting, like retailer . Others were perfectly healthy just weeks ago and became interesting only because of fallout from Covid-19.

One such company is , the gym operator backed by real estate giant As recently as late February, its $1 billion senior loan was trading at par, indicating that creditors expected to be fully repaid in 2024. The debt now fetches less than 75 cents on the dollar.

, the theater chain, is also on Mudrick’s list, and so is , the travel technology provider that was taken private in a $4.5 billion leveraged buyout less than a year ago. 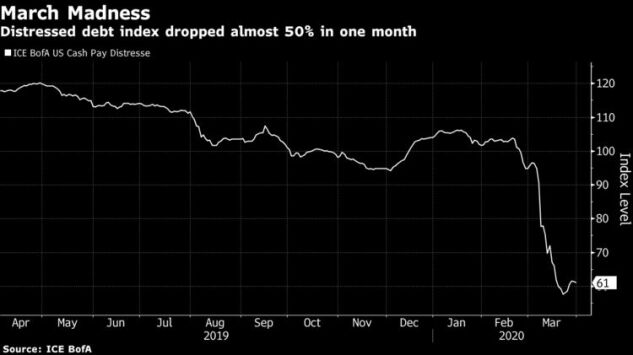 “We went from a benign distressed environment to the deepest and largest distressed opportunity in the history of the world,” he said.

To many seasoned credit investors, Mudrick among them, the markets were poised for a shakeout. Ultra-low interest rates fueled a multiyear debt-buying binge as pension funds, insurance companies, and even retirees reached for yield. Many companies that once borrowed easily are in dire straits, and the value of bonds and loans trading at distressed levels quadrupled in three weeks to almost $1 trillion.

Some distressed-debt players, especially those with exposure to collapsing oil prices, are themselves in trouble. Mudrick said his portfolio is holding up, mostly because of a $500 million bet against commercial real estate debt, the so-called “mall trade” that shorted CMBX indexes. 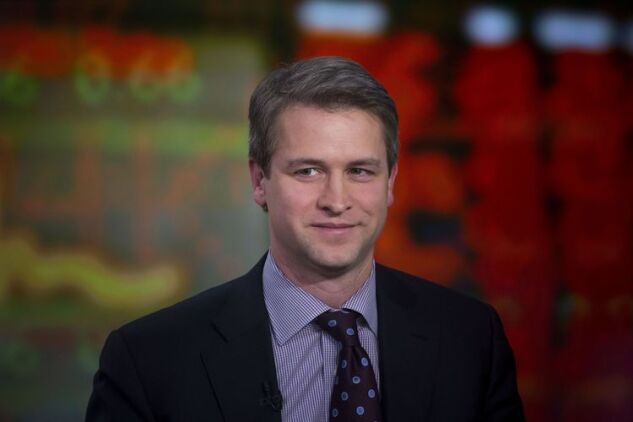 Since returning almost 40% in 2016, Mudrick has been among the best-performing hedge fund managers in credit. He said he’s held more than 40 calls in recent days with investors interested in giving him money.

He and a colleague were the only two people at his 13,000-square-foot office on Madison Avenue in Midtown Manhattan this week. The rest of the 30-person firm is working from home and, like so many businesses, video-conferencing via Zoom and Skype.

When screening debt markets for potential targets, Mudrick is looking for fundamentally sound businesses that can survive not just the coronavirus crash but lower levels of spending over the next three to five years.

“There’s going to be a deleveraging,” he said. “This is going to hurt for a while.”