, the owner of Men’s Wearhouse and Jos. A. Bank, is considering a potential bankruptcy after the coronavirus lockdown kept America’s office workers at home, putting a damper on demand for new suits.

The retailer and its advisers have started reaching out to interested parties about reworking its debts of more than $1 billion, according to people with knowledge of the matter. One option is a Chapter 11 filing, which would allow Tailored Brands to keep some of its stores operating while it seeks to shut weaker locations and satisfy its creditors, the people said. Its shares, which had climbed by as much as 33% on Monday, were down more than 17% after the market close.

Plans are in the early stages and could change, with Tailored Brands still seeking alternative forms of financing, according to the people. They asked not to be identified discussing a private matter.

“As a matter of company policy, we don’t comment on market rumors or speculation,” Houston-based Tailored Brands said in an email to Bloomberg. 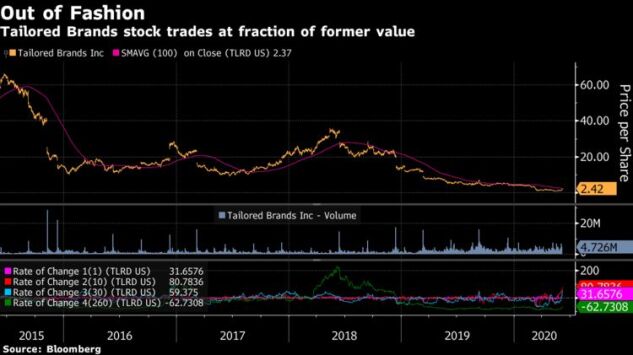 The restructuring plans could depend on market conditions and the outlook for stores to re-open, the people said. Sales have suffered because government officials were telling shoppers to stay home and nonessential businesses to stay shut to combat the Covid-19 pandemic.

Tailored Brands was struggling even before the outbreak. Sales have fallen every year since 2016 as Men’s Wearhouse and Jos. A. Bank contended with changing consumer tastes and ecommerce rivals.

The coronavirus made things worse by keeping office workers at home, all but eliminating the need for suits and ties. The outbreak also postponed events such as weddings and other celebrations, cutting into sales of formal wear.

Debt issued by Men’s Wearhouse has cratered to deeply distressed levels since March, with some of its trading below 30 cents on the dollar after sitting near par in February. The stock, which topped $66 in 2015, now hovers under $3.

The company traces its roots to 1973, when started Men’s Wearhouse in the Houston area. He would go on to become the face of the brand, starring in television commercials spouting his catchphrase “You’re going to like the way you look -- I guarantee it,” before he was ousted in 2013. The company acquired Jos. A. Bank the following year.

Last month the retailer said it would reopen 300 stores by Memorial Day, which did little to reassure investors. A Men’s Wearhouse store in downtown Boston was a target of recent looting.

Chief Executive Officer said in early May the company was taking “aggressive” measures to preserve liquidity, including furloughing or laying off a majority of corporate staff and distribution employees, borrowing from its credit facility and extending payment terms with suppliers, vendors and landlords. The in September.