, the owner of the Miami Herald, Kansas City Star and other newspapers, has become the latest casualty of the collapsing industry to fall into hands of an investment firm.

Only a day after Warren Buffett’s long-time business partner predicted the death of newspapers, the struggling McClatchy filed for bankruptcy in New York with plans to hand majority ownership of one of the industry’s largest newspaper publishers to hedge fund , owner of the scandal-plagued tabloid National Enquirer.

The plan further tightens the grip of financial firms on the newspaper industry, renewing concerns over the cost-cutting and loss of local coverage that often follows ownership by financial firms. Funds from Chatham to and Fortress Investment Group LLC have swooped in to take stakes in hundreds of papers, including once-mighty names as the Chicago Tribune and the New York Daily News. The nation’s largest newspaper chain is owned by , which is managed by Fortress.

If McClatchy’s plan succeeds, more than one-third of the total circulation of U.S. newspapers will be controlled by private equity firms or hedge funds, according to analyst Ken Doctor.

“These are companies in a distressed industry,” he said. “It takes financial players to come in and operate them and they’re cutting and cutting.”

McClatchy’s bankruptcy marks a grim milestone for a newspaper chain that was founded in 1857 with the Sacramento Bee. Chatham Asset Management, which would be its new owner, holds an 80% stake in American Media, owner of the Enquirer and run by .

In 2018, American Media entered into a non-prosecution agreement over claims that Enquirer editors had sought to assist Donald Trump during the 2016 election by suppressing potentially harmful stories about the candidate’s earlier affairs.

Chatham has been an investor in AMI since 2010 and it has no involvement in the editorial process or the day-to-day business decision of the company.

Chatham’s founder, , had dinner at the White House with President Donald Trump and his long-time friend Pecker in July 2017. American Media announced the sale of the tabloid last year, but the deal has yet to close.

“As a supportive investor in McClatchy since 2009, Chatham is committed to preserving independent journalism and newsroom jobs,” the firm said in a statement.

Hedge fund ownership of newspapers has stirred a debate over whether their cost-cutting know-how will help restore profits or lead to an exodus of talent and diminution of local coverage. Alden Global, which controls about 50 daily newspapers, has gained a reputation for making deep cuts to newsrooms. Legacy owners point to the enormous financial obstacles they are facing.

“The media industry has been under tremendous pressure for years,” McClatchy Chief Executive Officer said in a statement, adding that “technological advances, consumer-behavior shifts, and business-model challenges are among the many disruptive forces.”

That point was underscored as recently as Wednesday when Berkshire Hathaway Inc. Vice Chairman bluntly at the annual meeting of the that “technological change is destroying the daily newspapers in America,” adding that “they’re all dying.”

In January, Berkshire got out of the business when it announced it was selling all its 31 daily papers to Lee Enterprises Inc. for $140 million. 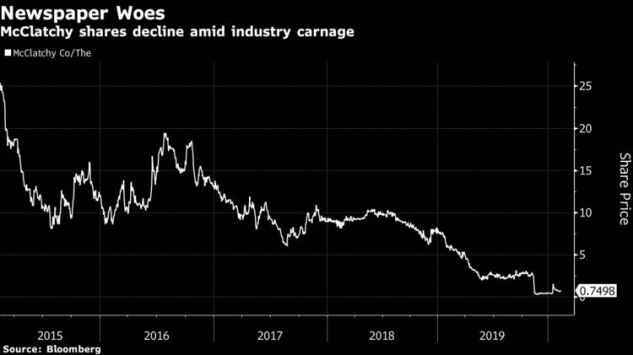 McClatchy has been in steady decline over the past decade. In 2006, it bought the Knight Ridder chain for $4.5 billion. The deal was ill-timed: By that year, print advertising dollars had started to fall, according to Pew Research Center. The global recession eroded ad revenue even further.

The company, which employs 2,800 people, serves 30 communities in 14 states, and last year had an average paid daily circulation of 1.1 million. But the trend has been relentlessly down, with daily circulation collapsing by 58.6% between 2006 and 2018, according to court papers.

Bankruptcies are nothing new for the newspaper business -- about 20 since the Great Recession, Doctor said. Other newspapers to file for Chapter 11 protection include Tribune Co., the Journal Register Co., Freedom Communications, and the owners of the Minneapolis Star Tribune, Philadelphia Inquirer and Philadelphia Daily News.

McClatchy listed liabilities of $1.6 billion and assets of only $946.5 million, according to its Chapter 11 filing. The Sacramento, California-based company said in court filings that its turnaround plan would cut that debt by 55%.

The company obtained a $50 million bankruptcy loan from lender Encina Business Credit, allowing it to continue operating its newsrooms as it restructures, McClatchy said in its .

Doctor, the newspaper analyst, predicts McClatchy will eventually combine with another newspaper chain.

“It creates another chess piece on the board,” he said. “The question is what can Chatham do to make its investment a better one and that will involve combining with another company.”

(Adds reference to prior Chatham statement regarding involvement in editorial process.)