A video of Alex Jones, radio host and creator of the website InfoWars, is played on a screen during a hearing of the Select Committee to Investigate the January 6th Attack on the US Capitol in Washington, D.C., US, on Tuesday, July 12, 2022.
Photographer: Al Drago/Bloomberg

Far-right conspiracist Alex Jones is facing heightened scrutiny as the bankruptcy of his Infowars parent company reveals a complicated web of corporate entities tied to his family and associates.

Jones’ parents and sister control companies that are now looking to be paid as creditors of the bankrupt debtor, Free Speech Systems LLC. Other companies run by his personal trainer and an Infowars contributor also have supplier contracts with Free Speech that will be probed during the Chapter 11 case.

Jones and his company now owe about $50 million in defamation judgment—and possibly more in the future—to Sandy Hook Elementary School shooting victim families for his lies that the 2012 shooting was a hoax.

Those families, as unsecured creditors, have led the call to investigate whether Free Speech, through his family and friends, has established corporate structures that allow him to protect assets that could otherwise be used to pay the defamation judgment.

A judge has ordered the bankruptcy trustee in the case to investigate the intra-family and other dealings that could hurt creditor payout. Future court rulings could wreak havoc on Jones’ quest to use bankruptcy to limit his liabilities.

The investigation “is a major inflection point in this bankruptcy case that will put the debtor on its heels and highlights that the Court is taking seriously the concerns of creditors,” said Nicholas Koffroth, a bankruptcy attorney with Fox Rothschild LLP.

Findings of fraud, dishonesty, incompetence, or gross mismanagement could result in removal of Jones’ control over the assets, a liquidation order, or dismissal of the bankruptcy case, said Donald L. Swanson, a bankruptcy attorney and shareholder at Koley Jessen. 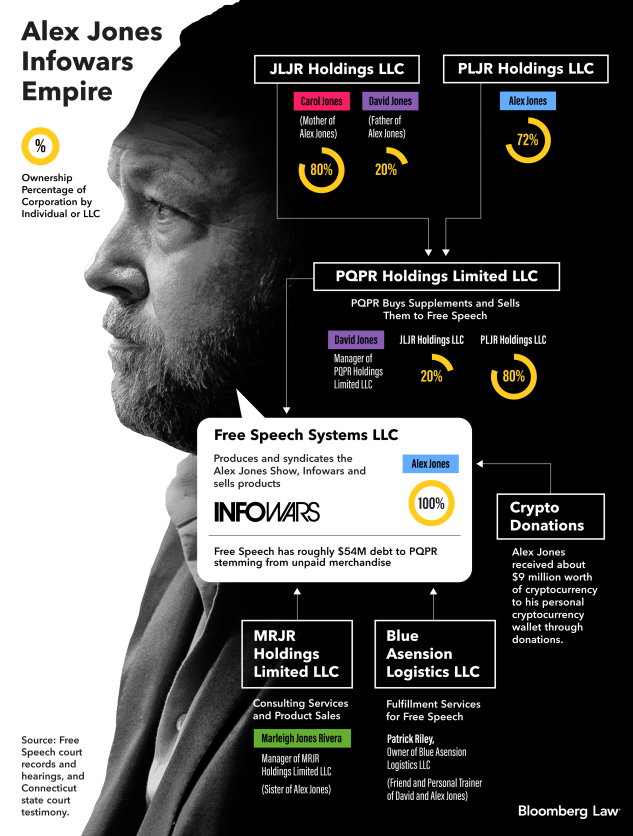 Small businesses’ transactions and dealings with close insiders aren’t unusual. But Free Speech’s finances should be probed given the concerns over a “lack of candor” by some of its former advisers, Texas bankruptcy Judge Christopher M. Lopez said last week, while directing Subchapter V trustee Melissa Haselden to investigate the debtor.

Jones, who via a separate entity invited a probe into Free Speech’s finances before Lopez ordered the investigation, said in a statement to Bloomberg Law that claims of “side deals” with certain companies are “100% false.”

“I put Free Speech Systems into bankruptcy so that the truth of our financial situation could be known to the courts and to the people of America,” Jones said. “The establishment press and the plaintiff’s lawyers have continued to systematically lie at every point about the amount of money we have and our business practices.”

All in the Family

One of the key relationships that Haselden will look into is Free Speech’s relationship with PQPR Holdings Limited LLC, a dietary supplements procurer that’s owned by Jones’ and his parents, David Jones and Carol Jones, through affiliated corporate entities, according to court filings.

Free Speech says it owes about $54 million in purportedly secured debt to PQPR. The dietary supplements and other products PQPR buys from suppliers are then sold to Free Speech to sell on the Infowars website.

If that debt is found to be valid and secured, PQPR would be among the first in line to get paid under a bankruptcy plan—before the Sandy Hook families.

“Just because the debtor labels the debt as secured does not mean that it is in fact,” said Melanie Cyganowski, a former bankruptcy judge now with the law firm Otterbourg PC.

Anthony Gucciardi, a former contributor to Infowars, also features in the case.

Free Speech has paid the processor a fee of at least 4% of the total amount of all credit card charges processed under the agreement, as well as reimbursement of all costs incurred, according to court records.

The trustee will investigate Free Speech’s agreement with a credit card processor, whose name has been redacted in financial disclosures. But the processor’s address uses the same PO Box of PQPR.

“Mr. Gucciardi has been in the health supplement business for years,” Butler wrote in an email. “He has brokered arrangements with companies that he understands then sold to FSS but those were part of his normal business. There is not any informal relationship with FSS or any Alex Jones-related businesses other than Auriam’s financial services contract with FSS.”

The bankruptcy judge also charged Haselden with investigating roughly $62 million withdrawn by Free Speech’s “members,” according to disclosures. The company’s only member is Jones.

“If proven, this could bring significant monies into the bankruptcy for distribution to the non-insider creditors,” Cyganowski said.

Creditors have questioned Free Speech over reports that Jones has recently collected millions of dollars in cryptocurrency donations. Jones said in Connecticut state court recently that he’s received about $9 million worth of cryptocurrency to his personal cryptocurrency wallet through donations solicited from Infowars.

All but about $60,000 worth of that cryptocurrency has gone back into Free Speech to shore up the business, Jones said.

The court hasn’t found any wrongdoing in Free Speech’s connections or transactions. But the sheer amount of “potentially incurable conflicts of interest” makes them subject to scrutiny, said Alan Rosenberg of Markowitz Ringel Trusty & Hartog PA.

The law doesn’t prevent a debtor from engaging in business with friends or family, but it’s “unrealistic” to expect that the debtor will impartially investigate potential wrongdoing within its own familial and social circle, Rosenberg said.

“If there is a legal basis to avoid PQPR’s claim, can we really expect Alex Jones/Free Speech systems to pursue it?” Rosenberg said. “Of course not – and that is not specific to Alex Jones or Free Speech Systems. These kinds of conflicts arise in many cases.”

To contact the reporter on this story: in New York at jnani@bloombergindustry.com

To contact the editors responsible for this story: at mchutchian@bloombergindustry.com; at ryu@bloomberglaw.com