Finland’s iconic chain of department stores, , lost a third of its market value after it filed for debt restructuring as the coronavirus pandemic wiped out demand for its wares.

Stockmann, which was already struggling to revive its business before the virus hit, filed the application at the Helsinki District Court on Monday. “The unprecedented situation caused by the coronavirus has led to an extreme decline in customer volumes, depleting the company’s cash in hand,” Chairman said, adding that online sales couldn’t compensate for the drop in footfall.

, a credit research analyst at Danske Bank, said Stockmann may still be able to survive since he expects “no creditor will push for a liquidation.” Indications of support from its bank syndicate “is positive and suggests that emergency liquidity could be available. That would enable the company some room to maneuver in the short-term,” he said in response to questions.

Still, the restructuring may result in “a sizable dilution” of shareholders’ holdings, should Stockmann’s hybrid bonds be converted to equity, , an analyst at Svenska Handelsbanken, wrote in a note to clients. 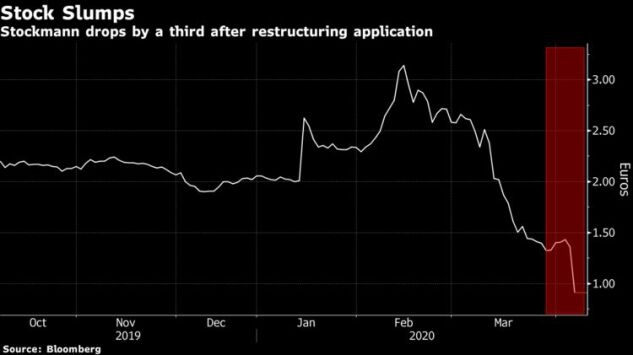 Stockmann’s business has been faltering as consumers increasingly shop online. Its expensive long-term leases have also left it with bloated costs. Revenue has slumped to roughly half its 2012 peak, and its shares are down 98% since an all-time high in late 2006. Its market value is now less than $100 million.

said the restructuring may help the retailer get out of pricey old leases and allow it to close smaller, “heavily loss-making,” department stores in Finland.

The 158-year-old company has been unprofitable since 2014 but had started to see signs that its efforts to turn around the business were .

Stockmann Monday its “business remains viable and can be restored to a sound basis.” A fifth of its known creditors, including its bank syndicate, have already indicated a positive stance.

Group subsidiaries, including department stores in the Baltics and fashion chain , its crown jewel, aren’t part of the restructuring proceedings. Stockmann it’s examining strategic options for Lindex, including a sale.

(Updates with analysts’ comments in third, fourth and sixth paragraphs)

To contact the reporter on this story:
in Helsinki at kpohjanpalo@bloomberg.net

To contact the editors responsible for this story:
at tbrogger@bloomberg.net