Covid-19’s economic impacts, from job losses to business closures and relief measures, have disproportionately affected Black Americans as much as the virus itself.

And if history is any guide, even the lifeline of bankruptcy may be ill-equipped to give most pandemic-ravaged Black debtors a fresh start.

Dozens of academic studies over more than three decades have concluded that Black debtors file for bankruptcy disproportionately more than other racial groups, yet get less permanent relief. A 2017 analysis—co-authored by now-U.S. Rep.found Black filers half as likely as other groups to permanently eliminate their debts, no matter which type of personal bankruptcy case they filed. Now, pandemic-fueled disparate impacts threaten to make relief even more difficult.

The U.S. Bankruptcy Code, while not overtly racial, “is designed to give relief to people who fit a certain profile,” said Mechele Dickerson, a professor at the University of Texas at Austin School of Law and an early researcher on race and bankruptcy. It most benefits debtors with wealth in large homes, trusts, or retirement accounts, Dickerson said, and economic data shows that “is not going to be, in most instances, Black people.”

Although personal filings haven’t spiked, and in fact have dropped since the pandemic began, attorneys expect the reprieve to last only as long as government help. The National Consumer Law Center and the National Association of Consumer Bankruptcy Attorneys are urging Congress to make immediate changes, warning that the bankruptcy code has “not evolved to meet the needs of today’s consumers, or, more pointedly, to address today’s global crises.”

The Black jobless rate was stuck at 14.6% in July, despite declining for all other groups and dropping to 10.2% overall. Most Black-owned businesses couldn’t get relief through the Paycheck Protection Program passed by Congress because 95% of them don’t have employees. From February to April, 41% of Black-owned businesses closed down, compared to 17% of White businesses.

Black households also tend to have far less to fall back on when they lose a job or get hit with surprise medical expenses. The net worth of a typical Black family in 2016 was about a tenth that of a typical White household. As of the second quarter of 2020, 47% of Black families owned their homes, compared to 76% of White families.

In a line by line analysis of the bankruptcy code in 2004, and its revisions the following year, Dickerson concluded that the “ideal debtor” was a married, employed homeowner who supported only a few dependents. The code offered much less relief to a single person in a rental apartment, a grandparent raising a grandchild, or a young graduate with student loans, she found.

“Bankruptcy is good for a one-off—but not good for those who are constantly struggling,” Dickerson told Bloomberg Law.

‘On the Front Lines’

Some Black debtors already in Chapter 13 restructuring plans are now straining to keep up on monthly payments, bankruptcy lawyers say.

Attorney Michael E. Doyel has two offices in St. Louis: one in predominantly White Sunset Hills, the other in Bridgeton, where Blacks make up about 26% of the population. He said there’s no question where people are having a harder time.

“Covid is very much hitting everybody, but it’s hitting the African American community worse,” Doyel said. Among the clients he sees, “a lot of them work two or three jobs, and they may have lost two.” 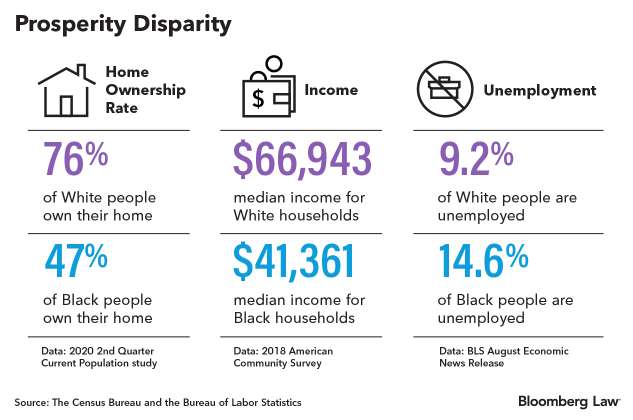 An April study by health authorities in St. Louis found zip codes with a majority Black population accounted for 34% of the city’s confirmed Covid-19 cases, despite Black people being 16% of the population.

One in six of all essential workers nationwide are Black, making it difficult for them to work from home and putting them at greater risk of getting sick.

Attorney Rochelle D. Stanton of Rochelle Stanton Law in St. Louis said many of her Black clients “tend to be on the front lines” of the pandemic as home health care workers, nurses, support staff, and service workers. Several have lost patients, gotten sick with the virus, or been sent home to quarantine, she said. “And many times when that happens, they are sent home without pay.”

For years, studies have found that the majority of Black Americans seeking personal bankruptcy have chosen to restructure their debts under Chapter 13, rather liquidate under Chapter 7, even though the latter is used more than twice as often overall.

Chapter 13 is designed to save large assets like a home, a car, or a retirement account. It requires up to five years of court-supervised repayments that more than half of filers don’t complete, leaving them saddled with ongoing debt after the bankruptcy fails.

Chapter 7 is cheaper, easier, and faster, but debtors have to give up all large assets and pay all of their attorneys’ fees up front. Almost all Chapter 7 filers complete their cases in about four months and permanently eliminate their debts.

“When you look at the national figures, there’s no question that something is going on,” said John Rao, an attorney at the National Consumer Law Center. “African Americans who have fewer assets and lower income are filing Chapter 13s at a higher rate than whites, and that doesn’t make sense.” 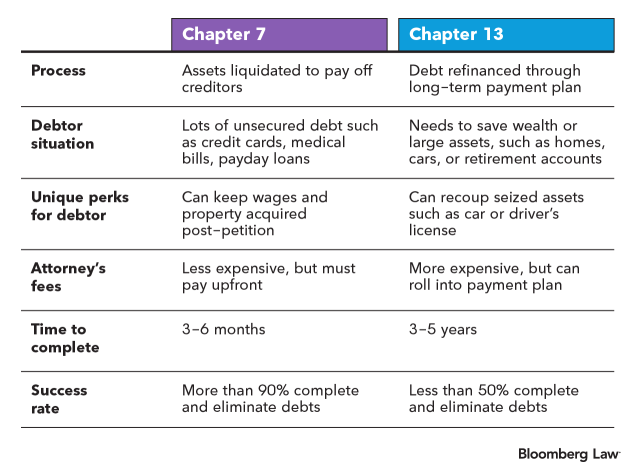 The Administrative Office of the U.S. Courts, the federal agency that administers bankruptcy cases, said it didn’t have information about why debtors choose different chapters, and there are a variety of reasons a Chapter 13 bankruptcy might fail.

“Chapter 13 debtors are vulnerable to changes of life circumstance, such as loss of employment, divorce, or unanticipated emergency,” Charles Hall, a spokesman for the office, told Bloomberg Law. “There is no guaranteed path of success.”

One theory for why Blacks use Chapter 13 more often than other racial groups is that it can be a “no-money-down” process. Although a Chapter 13 costs almost three times the amount of a Chapter 7, usually running up $3,300 or more in attorneys’ fees, it allows a debtor to wrap fees into a payment plan.

“There are examples of lower-income people who are filing 13s who should be filing 7s mainly because it’s the way they can come up with the money to pay for their attorney,” Rao said. 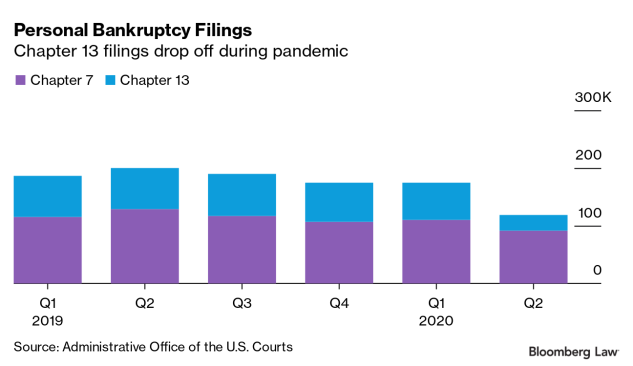 Other research suggests debtors choose Chapter 13 to save assets that aren’t easily saved in Chapter 7.

In Georgia, Chapter 13 filings spike just ahead of monthly foreclosure sales, indicating the filers there may use it to save their homes. Some attorneys say low-income filers use Chapter 13 as a way to refinance high-interest car loans that they can’t refinance through banks.

In Chicago, after city authorities ramped up traffic enforcement, researchers found debtors with long commutes were using Chapter 13 to wipe out traffic fines and get back cars that were impounded for their failure to pay those fines. That’s possible under Chapter 13 but not Chapter 7.

Bankruptcy courts don’t collect information about race or ethnicity on bankruptcy filings because the law doesn’t require it. “There are no statistical reporting requirements related to race, ethnicity, or any other demographic data,” Hall said.

Bankruptcy researchers have drawn conclusions about race based on zip codes, census tracts, and surname algorithms.

The Final Report of the American Bankruptcy Institute’s Commission on Consumer Bankruptcy, which devoted a chapter to racial justice in bankruptcy, recommended that Congress authorize collection of race and ethnicity information as part of the petition process.

“Without such information, the disparate racial effects that we identify for blacks will undoubtedly go unaddressed,” said a 2017 study by Duke Law’s Sara Sternberg Greene, Georgetown’s Parina Patel, and Porter, who was then at the University of California Irvine School of Law. “Any efforts to equalize outcomes for blacks and non-blacks would be complex, but without the data and government responsibility for assessing the situation, the façade continues that bankruptcy is race neutral.” 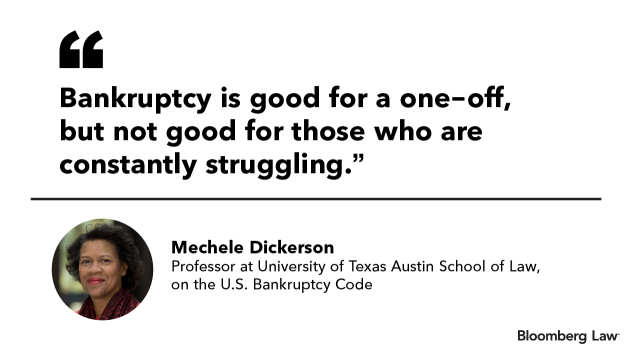 Since the pandemic started, moratoria on evictions and foreclosures, mortgage forbearance, suspension of car repossessions and wage garnishments, and $600 per week in federal unemployment benefits have staved off the worst.

People usually flounder financially for two to five years before resorting to bankruptcy, said Robert Lawless, a professor at the Illinois College of Law who specializes in bankruptcy and consumer finance.

“Bankruptcy is a legal tool,” Lawless said. “It gets rid of your past debts. It doesn’t give you new money. It doesn’t get you a job.”

The federal CARES Act gave existing Chapter 13 debtors until March 27, 2021, to modify their plans, with the option of extending their bankruptcy by up to two years to reduce monthly payments.

In St. Louis, the Chapter 13 Trustee has let debtors skip payments for up to three months in response to Covid-19, and temporarily stopped filing motions to dismiss.

Nearly 300 debtors so far have renegotiated mortgage payments with lenders and have filed forbearance agreements with the court, said Dana C. McWay, clerk of the court of the Eastern District of Missouri.

“We don’t know what to modify it to,” he said. “If there’s no money, you can’t reduce it to nothing.”

(Adds new second paragraph under No Data subhead. An earlier version corrected the year in date in fifth paragraph from the end.)