The global pause in business that’s pushing companies to the brink of failure hasn’t yet caused a spike in bankruptcies. It will.

Business filings for February and March are likely to come in lower than last year, according to the . That won’t last as efforts to combat the Covid-19 pandemic keep businesses closed across the U.S. and hundreds of millions of consumers under stay-at-home restrictions.

Some companies, especially retailers, have good tactical reasons for delaying the inevitable. Others are waiting to see if a promised, $2 trillion federal government stimulus will save them. And some can’t scrape together enough cash to pay for a Chapter 11 case, where top attorneys and financial advisers routinely more than $1,000 an hour.

A wave of new bankruptcy filings may begin as early as April, followed by a spike in consumer cases in June or July, said Ed Flynn, a consultant with ABI who studies bankruptcy statistics.

“People are getting together with attorneys and doing all the paperwork,” said Flynn, who spent 30 years with the administrative arm of the federal court system and the Office of the U.S. Trustee, the bankruptcy watchdog for the Department of Justice. “There is going to be some lag.” 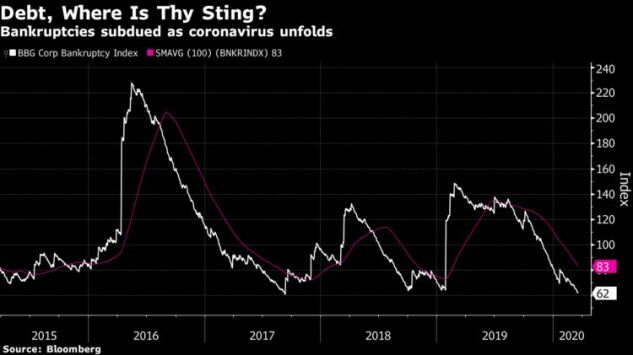 While the courts are quiet, the preparations have bankruptcy professionals as busy as they have been in years, but it’s hard to run a going-out-of-business sale or estimate the proceeds when shoppers are being told to .

“Distressed situations are ramping up more quickly now than they did in 2008,” said , co-chair of the bankruptcy practice at . “Any company that was already on the edge is now at the tipping point.”

Filing bankruptcy quickly allows companies to halt most debt payments and other non-essential spending, which is why lawyers usually push clients not to delay. For many businesses, a rush to Chapter 11 may not be possible now.

“This cycle is going to be different,” said bankruptcy lawyer of . “If you look at sectors being hardest hit, it’s hard to imagine we’re going to be able to sell all the hotels that had to shut down during this process.”

Retailers have the best reasons to wait as long as possible to seek court protection. Because of the way rent and leases are treated under the bankruptcy code, chains with lots of stores have less time than an oil company or other business has to reorganize. In the current environment, it may be easier to fight landlords outside of bankruptcy, said Mitchel Friedman, senior vice president at , which works with retailers.

“From a rent perspective, you’re in a worse position,” by filing, Friedman said. If tenants simply withhold rent, landlords could go to court to compel them to pay, but right now, “every retailer in America and every landlord is in the same position” and it would be hard to enforce, he said.

Companies may also delay filing because the lenders that fund reorganizations with so-called debtor-in-possession loans, are holding back, said , a bankruptcy attorney at in Atlanta. Bankruptcy lenders make loans backed by assets that can be liquidated if all reorganization efforts fail.

“How do you monetize the assets in this environment, and how do you do it within the time frame permitted by the bankruptcy code, and how do you induce a lender to fund that?” Borders said.

Even healthy companies are struggling to raise enough cash to survive the current turmoil, Strickland said. Many are as much as they can from their revolving credit accounts, much like a consumer who takes a cash advance on a credit card.

Uncertainty is also stalling filings, Flynn said. In recent years, many companies have spent months negotiating with creditors and restructuring their financing before going to court. Those pre-packaged bankruptcies will be harder to arrange because there are so many unknowns about how the current economic crisis will play out, Flynn said.

“It will hard to get multiple parties to agree to something,” Flynn said. “Nobody has a real good picture. That makes it hard to get a deal.”

Companies should proceed cautiously, because a hasty decision now could cost them when they do file for bankruptcy, said with the law firm. For example, if a board rushes to sell or trade away a valuable asset without the proper due diligence, creditors can sue, claiming the move was a fraudulent transfer, even if the company was trying to save itself.

“Board processes and governance is extremely important in this environment,” Paul said.

The biggest unknown is what happens when restrictions lift and daily life shifts more toward normal. It’s not clear, for businesses that survive, how their battered customers will behave, Borders said.

“We don’t know what the psyche of the U.S. consumer will be,” she said.

To contact the reporters on this story:
in Wilmington, Delaware at schurch3@bloomberg.net;
in New York at llochner@bloomberg.net