InfoWars founder Alex Jones speaks to the media during his trial on Sept. 21, 2022 in Waterbury, Conn.
Photographer: Joe Buglewicz/Getty Images

must pay $965 million in damages to families and an FBI agent ravaged by the Infowars founder’s lie that the Sandy Hook Elementary School massacre was a hoax, a Connecticut jury found.

Wednesday’s verdict, which followed a four-week trial pitting the combative internet host and conspiracy theorist against the victims’ families, brings the total damages so far to more than $1 billion. That includes an award of almost $50 million from a separate trial in Texas for the family of a first-grader killed in the 2012 mass shooting. 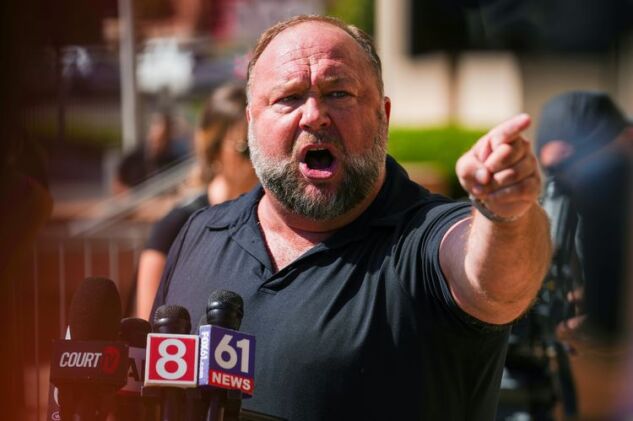 Chris Mattei, one of the families’ lawyers, called the outcome a “historic” blow against “Alex Jones’s lies and their poisonous spread, and for truth and for our common humanity.” At a news conference after the verdicts were read out, Mattei said evidence at trial showed that Jones’s fabrications had reached at least a billion people. He said Jones had carried out a 10-year assault “that made him very rich and exploited the fears and resentments of his audience.”

Testimony from an employee of Jones pegged his total earnings from the sale of dietary supplements, books and survival gear at $100 million to $1 billion since the shooting, with $810,000 in sales on a single day in 2020. Jones was raising funds off the verdict Wednesday in real time, urging followers to buy his products to support his defense, according to clips of his show on Twitter.

After years under the pressure of this campaign, Mattei said, “the families realized Alex Jones’s cruelty and greed knew no bounds, and they decided to take a stand” to affirm that their loved ones were real and “not to be used as cheap props to be torn apart” for profit.

Jones, 48, now faces additional, punitive damages in the Connecticut case under a state law against using false statements to sell products, a statute that Superior Court Judge earlier found he violated. Bellis set a schedule for the reckoning of that sum, including a hearing on Nov. 7.

“Jurors heard that Mr. Jones was responsible for the creation of all the craziness that affected the Sandy Hook parents,” he told reporters outside the courthouse. “You and I, we know better.”

Before the damages trial, the judge had granted the plaintiffs a default liability verdict against Jones, saying he had repeatedly refused to turn over financial records and other documents in the case. Pattis told the press he disagreed with that decision and with Bellis’s restrictions on the evidence he could present in his client’s defense.

“We look forward to our prospects on appeal,” he said.

The families’ lawyers had suggested the six-person state jury use $550 million as a “baseline” for calculating the compensatory damages it was to award -- roughly one dollar for every social media impression Jones’s Facebook, Twitter and YouTube accounts jointly racked up during six years following the mayhem in Newtown.

At one point in the trial, when the jury was on a break, the lawyers told Bellis it “was not just the occasional lie -- this was the use of lies to fuel a business. It was a business plan to hurt these families and to sell things by hurting them.” Jones has said the massacre was staged to advance a gun control agenda.

‘Boycott’ of the Trial

Jones himself was mostly absent from the trial, choosing to “boycott” it and, instead, hold sidewalk press conferences and continue putting out his show. He appeared in the courtroom on only one day, to testify under subpoena. Pattis had planned to put him on the stand as the sole witness in the defense case, but his client changed his mind the day before.

Jones claimed the judge’s restrictions on what he could tell the jurors put him in an “untenable position” that violated his free speech rights. Bellis had forbidden Jones to testify about his political beliefs, conspiracy theories, gun control or First Amendment issues he claims explain and excuse his false statements about Sandy Hook.

Jones has said he is all but broke after defamation lawsuits by families of the 26 murdered schoolchildren and educators drove him into bankruptcy. , Infowars’ parent company, filed for protection from creditors in late July in Texas, where Jones lives.

“They could get a $1 billion verdict, and they wouldn’t get a dime,” Jones said during one sidewalk press conference. He also denounced the judge and jury as “rigged” and mocked the trial as a “kangaroo court.”

Given the earlier default verdict finding Jones liable, the jury was asked only to calculate how much he owed the families and William Aldenberg, a agent who responded to the shooting, for defamation and emotional distress.

The largest award, $120 million, went to Robbie Parker, the father of a slain 6-year-old girl, whom Jones made the face of his hoax campaign, repeatedly mocking a tearful press conference Parker gave.

“While the truth was being said in the courtroom, he was standing right here lying,” Parker told reporters outside the courthouse on Wednesday.

The second-biggest verdict, $90 million, is for Aldenberg. Jones seized on an outdated agency vest the agent wore to the chaotic scene as evidence that the shooting was staged by “crisis actors.”

The smallest award was $28.8 million.

‘Horror’ of Being Stalked

During the trial, which took place about 20 miles from where the shooting occurred, victims’ families told the jury about how Jones’s repeated lies not only deepened their pain but also drove his followers to stalk them in person and online. Some of them said they had moved five or six times to escape the harassment, but that Jones’s fans kept finding them to renew their torment.

“This was a horror beyond anything we could ever imagine,” Mark Barden, father of a 7-year-old boy killed at Sandy Hook, testified about death threats and hateful comments Jones acolytes posted on his family’s website and social media accounts.

Pattis, Jones’s lawyer, suggested to jurors that the families were exaggerating their suffering in the service of a political plot to confiscate guns. He portrayed Jones as “a businessman who kept his business afloat by appealing to the fears of people” who shared his “loss of faith in public institutions.”

During his short appearance on the stand, Jones declared he was “done apologizing” for his Sandy Hook statements, adding he had admitted “years ago” that the massacre really happened. But on Infowars shows that aired during the trial, he defiantly walked back those statements, saying he now views both Sandy Hook and the defamation trial he called a sham as “synthetic.”

A video clip of those comments was shown to the jury during closing arguments.

To contact the reporter on this story:
in New York at laurel@calkins.us.com