is a leading lender to small and midsize U.S. companies, home buyers and commercial property investors, and has capacity to unleash about $384 billion of additional loans to customers trying to weather the coronavirus pandemic.

But the bank can’t -- because it’s in the regulatory doghouse.

The remains reluctant to ease or lift its 2018 order capping the San Francisco-based lender’s assets because the company has yet to fully address concerns that prompted the unprecedented sanction, according to people with knowledge of the situation. The cap effectively prevents the bank from deploying a mountain of pent-up capital that could back a surge of lending.

As the coronavirus pandemic began upending the economy in recent weeks, it quickly emerged that Wells Fargo’s representatives had privately broached the idea of at least temporarily lifting the restriction so it could help more customers. The Fed has yet to publicly disclose its decision.

Behind the scenes, Fed officials are skeptical the bank is ready, the people said. Wells Fargo’s new leaders have been making progress but have yet to prove they have made adequate reforms to prevent the consumer abuses that fueled scandals in recent years. And they have confidentially warned the Fed they will miss an April deadline to submit a required plan for improvements.

“While we cannot comment on regulatory matters, Wells Fargo is focused on satisfying the requirements of the consent order,” the company said in a statement. “During these challenging times, we are very focused on doing all we can for our clients while operating under the constraints of the asset cap.”

The Fed’s consent order from February 2018 caps Wells Fargo’s assets at their 2017 level. At the end of last year, the bank was just $24 billion short of that level -- all the room it had to grow unless the ban is rescinded. With credit lines being drawn by companies and deposits flowing in, it may already have gotten there.

Wells Fargo executives have made internal adjustments over the years to ensure they can meet customers’ needs. The bank should be able to keep meeting demands from existing clients, but it might be constrained in ramping up lending significantly as new ones seek help, one of the people said.

The appeal puts the Fed in a difficult spot -- conflicted between its role as a tough regulator of financial giants and its current efforts as a central bank trying to ensure ample cash for the struggling economy. The Fed has encouraged the biggest lenders to use their excess capital and dip into additional buffers to expand lending during the pandemic.

Bloomberg calculated Wells Fargo’s capacity for additional lending based on its capital at the end of 2019. Together, the nation’s eight banking titans had enough then to ramp up lending by $1.6 trillion. But ironically, the firm with the most firepower among them can’t proceed. 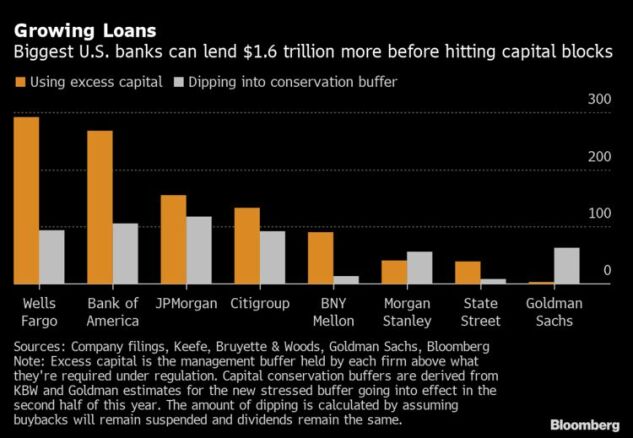 It would be tricky to lift the ban temporarily, because it would entail setting a time line for undoing any growth. It’s one thing to prevent a balance sheet from expanding, quite another to shrink it significantly after making hundreds of billions of dollars in ongoing loans.

Chief Executive Officer took over in October after two previous CEOs frustrated regulators and politicians who accused the bank of failing to act quickly enough to fix problems. Unlike his predecessors, both longtime Wells Fargo veterans, Scharf is an outsider, and he’s been developing plans to more radically overhaul the company. At a congressional hearing this year, he acknowledged there’s much left to do.

The bank’s representatives didn’t try pressing a case to the Fed that Scharf’s work on reforms is done, the people said. Rather, they noted the scope of the emergency facing the country and the bank’s willingness to help. Without the cap, Wells Fargo would be able to arrange significantly more financing for consumers, local businesses, large corporations and municipalities.

Wells Fargo has been in Washington’s crosshairs since a variety of scandals emerged following the 2016 revelation that employees had opened millions of potentially fake accounts to meet sales goals. Lawmakers on both sides of the aisle have expressed deep frustration with the bank, with some signaling the Fed would face a backlash if it’s lifted. But there’s a chance that the virus’s impact on the economy might shift the political landscape.

On Saturday, , who chairs the House Financial Services Committee, asked Fed Chair for information on Wells Fargo’s request and what the regulator makes of it. She wants his staff to provide a briefing to the committee in coming days on its supervision of the bank.

Companies eager for cash have drawn down credit lines and arranged new facilities, obtaining at least in financing since March 9, when Bloomberg News began tracking the data. Behind the scenes, bankers have sought to persuade corporate clients that they don’t need to tap cash preemptively -- often for reasons that have less to do with liquidity than . That suggests that even if Wells Fargo’s cap were lifted, it may not rush to deploy all of the money.

While lending boosts the asset side of banks’ balance sheets, investors fleeing capital markets have generated a flood of deposits, increasing the liability side. By March 18, the 25 largest commercial banks had collectively gained $420 billion of deposits this year, according to Fed data.

Wells Fargo had 9.6% of the market share for U.S. deposits in 2019, according to Federal Deposit Insurance Corp. data. If it maintained that share, the influx would amount to about $40 billion, potentially pushing the bank above its 2017 asset cap.