In Hong Kong, bankers have learned to win stock offerings by video chat, and Morgan Stanley is hosting a meeting for a thousand-plus attendees. At Swiss giant , wealth management executives have realized trips to see clients weren’t as crucial as thought. In California, an investor in hedge funds said he’s pleasantly surprised by how much faster he can confer with them remotely.

Around the world, there are early signs that some of the emergency measures Wall Street is rolling out to keep employees safe in a pandemic will become a lasting practice in an industry that’s long mythologized the handshake. That’s likely to hearten working parents who’ve struggled to persuade managers to let them log in from home, as well as many younger recruits at ease doing things digitally.

Much of the positive reception comes from Asia, where the virus began wreaking havoc months ago, forcing bankers indoors. They predict colleagues in other countries will embrace the changes too, starting with sales and trading, as the disease spreads and the industry gets more comfortable with using video chats and related technology.

“The outbreak has created the urgency to try out new ideas,” said , Morgan Stanley’s head of Asia institutional equity distribution. He oversees the firm’s annual investor summit in Hong Kong next week. Registrations jumped 50% from last year after the event moved online, with the number of participating companies topping initial estimates fourfold.

The New York-based bank has moved other events focused on European and Indian financial companies online, too. The latter also saw registrants surge. The Hong Kong summit has now attracted a number of registrants from outside Asia for the first time, including several from Qatar, Canada and France, according to Reza.

UBS’s travel costs for Asia plunged 90% in February after the outbreak restricted movement, one person familiar said. Now local executives are discussing whether a long-term shift toward remote meetings is viable for bankers who cover the sprawling region, people familiar said. 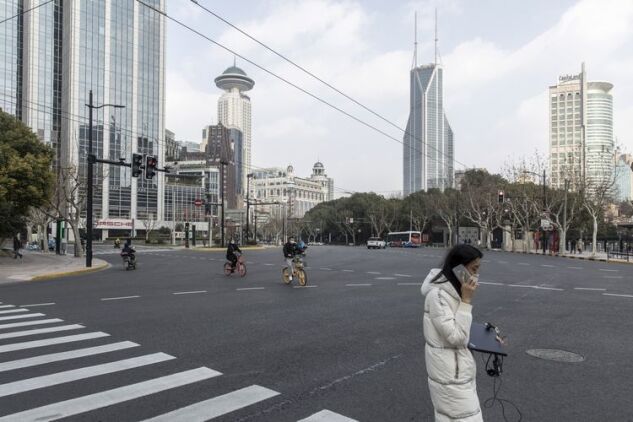 A woman carrying a laptop and smartphone crosses a road in Shanghai on Jan. 29.
Photographer: Qilai Shen/Bloomberg

The firm’s dealmakers recently completed at least five pitch meetings on about $2 billion of stock sales with corporate clients via Skype and Zoom as they dialed in from home or from separate rooms, the people said. bankers have been pitching via video conference on five to 10 transactions a week this year across mergers and acquisitions, equity and debt issuance, said , head of Asia Pacific banking, capital markets and advisory.

“With today’s technology you can interact quicker with a client than ever before and this could be a model for the future even when this situation resolves itself,” Metzger said.

Back at UBS’s headquarters in Zurich, wealth management leaders are considering eliminating a lot of travel they were doing too, according to a person with knowledge of their thinking. Yet in both regions, executives are still willing to fly to clients who prefer it, or for certain business that must be conducted in person.

In New York and London, traders and salespeople are just getting set up in dens or at dining tables for the long haul. And behind the scenes, some already are grumbling about piecemeal access to the resources in the office. But among them are also parents and others who have been arguing for years it’s possible to handle transactions remotely. This may be their chance to prove it can be done.

Michael Rosen, a Los Angeles-based investor in hedge funds, said he’s enjoying the efficiency. Instead of spending time traveling to meetings, he’s using it for more conversations via video-conferencing programs like Zoom. To be sure, he said, there are times when seeing someone face-to-face is critical, such as when making gut-checks before allocating millions of dollars to a fund manager.

“We will return, one day, to in-person meetings, but video technology is here to stay and will only grow in importance,” he said. “I suspect it is now a core feature of how we will work in the future.”

It’s not just small gatherings. organized a virtual town hall for 800 staff in Hong Kong and has been sharing its experience with its offices in the U.S. and Canada. chief economist for the Asia-Pacific region has been holding webcasts for clients to discuss the outlook for the economy and markets.

Even the crucially face-to-face world of recruiting has temporarily moved virtual, according to , the founder and chief executive officer of Wall Street headhunter IDW Group, which counts some of the world’s biggest hedge funds as clients. The market’s swings are stirring up demand for hedge fund managers who can make money in times like these, said Weinstein, who instituted a 10-foot-distance policy before taking her meetings virtual with Skype.

“As this proves efficient, it may be utilized more frequently,” she said. Still, “there’s nothing better than in-person when convincing someone to make a move. It’s about comfort with the unknown, and a layer of distance does not help.”

Some corporate clients have shown a willingness to go virtual on even their most important transactions.

InnoCare Pharma Ltd., a biotech firm which a $288 million initial public offering in Hong Kong this month, originally planned to meet investors after the Chinese New Year. But after the virus erupted, executives decided to conduct the roadshow online, according to bankers involved. Morgan Stanley and arranged the deal.

The degree to which virtual dealmaking continues will depend on the wants of clients, bankers said. But for now, the industry is showing an unusual openness to do things differently.

The going-virtual phenomenon is likely to spread to rest of the world and can have a “significant” impact on reaching clients and productivity, , Morgan Stanley’s co-chief executive officer of Asia-Pacific and co-head of global equities, said in an interview.

“There will be a change, there’s no question,” he said. “I don’t know that we’re going to go all the way back to where we were. I think we will end up somewhere in the middle.”

To contact the reporters on this story:
in Hong Kong at kchan14@bloomberg.net;
in New York at kporzecansk1@bloomberg.net

To contact the editors responsible for this story:
at czachariahs2@bloomberg.net;
at mpatterson10@bloomberg.net