The Federal Reserve now requires banks and other card issuers to offer merchants at least two options for the middleman companies that route debit card payments at brick-and-mortar stores. A new rule, which will take effect in July, expands that requirement to online purchases and other “card-not-present” payments using Apple Pay and other mobile apps.

Customers largely won’t notice the change. But banks oppose the rule change, contending that requiring them to work with smaller payment processors could compromise data security.

In 2019, smaller payment processors—such as ’s Star Network and FIS Global’s NYCE network—only processed about 6% of online and other card-not-present debit transactions, according to the Fed.

But the Fed’s order for debit payments to be processed on multiple, different networks in the fast-growing e-commerce sphere will give smaller upstarts more opportunity to grow their market share, market watchers say. Rule change proponents also say competition will help lower transactions costs for merchants and, ultimately, consumers.

“It’s viewed as a pro-competitive move by merchants, as online commerce has been growing in share but had not been subject to the debit routing choice rule that has applied to retail commerce for a decade,” said Todd Baker, a senior fellow at Columbia University’s Richard Paul Richman Center for Business, Law, and Public Policy.

An optimistic outlook for smaller payment processors partly derives from their success stemming from another rule change more than a decade ago.

The Fed’s current two-or-more-processors requirement for in-person, card-present transactions was enacted in 2011 through an amendment to the Dodd-Frank Act.

That change succeeded in increasing Visa and Mastercard’s competition for processing in-person debit card payments. Smaller processors processed more than 40% of such transactions in 2019, the Fed said.

But the two credit card giants continue to dominate the networks that process remote, card-not-present debit transactions, said Doug Kantor, general counsel of the National Association of Convenience Stores. The association is a member of Merchants Payments Coalition, a group of retailers that advocates for greater transparency and competition in the US payments system.

Some smaller banks have opened up their networks to do business with payment processors other than Visa and Mastercard for card-not-present transactions, Kantor said. But the larger banks have mostly excluded them, he said.

“They’re already competing, so it’s just a matter of the merchants being more successful when they try to route to [the second network] and not having problems with transactions not going through,” Kantor said. “No doubt once the rule is implemented, they’ll get a bunch more [usage].”

One of the factors that contribute to Visa and Mastercard’s dominance is the type of payment networks they operate.

Visa and Mastercard control most “dual-message” transaction networks, in which a payment message from the retailer is sent to the processor and relayed again to the bank.

Banks say dual networks are more secure, as they have additional authentication measures. The dual message networks are still often the only available choice for remote debit sales, according to the Fed. 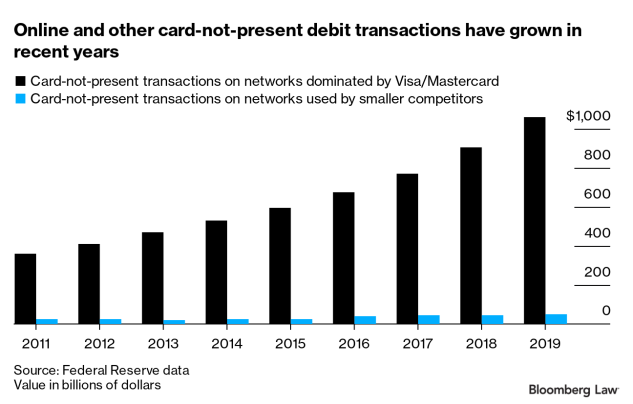 Smaller competitors, utilizing their single-message networks, have been all but excluded from the goldmine of card-not-present transactions, Fed data shows.

Smaller competitors’ success in brick-and-mortar payments proves they can overcome any barriers to entry and directly compete with Visa and Mastercard as they expand into online transactions, said Leon Buck, a vice president at the National Retail Federation.

But the two card giants will find a way to blunt their losses, said Baker of Columbia University.

“This is something that has been coming for a long time, and they will continue to compete by providing benefits to online and offline retailers that offset some of the cost advantages of the smaller networks,” he said.