Joe Biden embraced progressive demands for student debt cancellation after he won the Democratic nomination. Whether he agrees to use executive authority to grant loan relief will test how much influence progressives hold in his administration.

Sen. (D-Mass.) has been pushing for automatic loan forgiveness for student borrowers in response to the coronavirus pandemic. In prodding President Donald Trump to act, she said he didn’t have to wait for Congress because he had the authority to grant that relief himself.

Now Warren and other progressives have Biden to convince.

Warren and Senate Minority Leader (D-N.Y.) introduced a resolution () in September calling on Trump to wipe $50,000 per borrower off the books.

“Massive student loan debt is exacerbating the historic economic crisis our country is facing,” Warren said of her resolution. “The president can use existing authority to deliver immediate relief for struggling Americans.”

Making that case to the president-elect will be more critical to hopes for mass debt cancellation after Democrats fell short of retaking the Senate in the Nov. 3 elections. Congress is unlikely to advance student debt forgiveness unless Democrats shift the balance of power in the Senate in January runoff elections in Georgia, which would still leave the party with only a razor-thin margin. 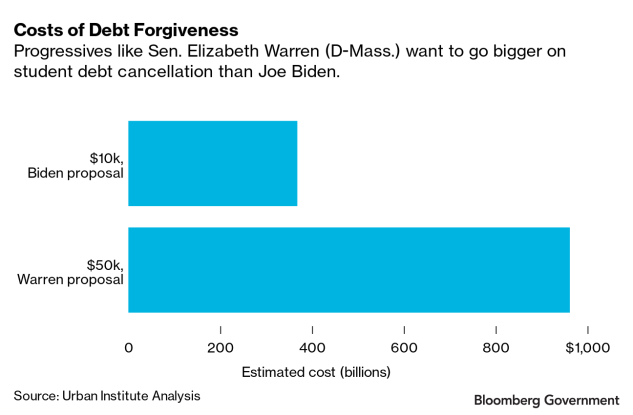 Even before the pandemic, Warren and Sen. (I-Vt.) called for broad debt cancellation as part of their respective presidential primary campaigns.

More moderate candidates balked at the proposals for universal debt cancellation, however. Biden initially focused on simplifying loan repayment, but after winning the Democratic nomination, announced a plan to clear undergraduate tuition-related debt for any student borrower making up to $125,000.

Biden also endorsed calls from Senate Democrats to clear up to $10,000 for every student borrower in response to the pandemic — less than what Warren proposed but enough to clear the entire balance of more than a third of borrowers. The Urban Institute estimates the proposal would cost $369 billion.

“I would expect there’s going to be some sort of loan forgiveness,” said Justin Draeger, president and CEO of the National Association of Student Financial Aid Administrators. “It’s become too much of a signature issue at this point.”

The case for using executive authority to cancel student debt was seen as legally untested even a year ago. But observers say the idea has gained traction in Democratic policy circles.

Warren in 2015 pushed the Education Department to use an obscure provision of the Higher Education Act known as borrower defense to clear the debt of defrauded for-profit college students, said Bob Shireman, director of higher education excellence and senior fellow at The Century Foundation. Following pressure from Warren and student debt activists, the Obama administration canceled hundreds of millions in loans owed by students who attended schools operated by defunct for-profit chains Corinthian Colleges and ITT Tech.

“She has a track record in actually identifying provisions that can benefit distressed borrowers,” said Shireman, who served as deputy under secretary at the Department of Education from 2009 to 2010. “So it certainly deserves a serious look if she’s bringing it up.”

Proponents of executive action found further ammunition in the Trump administration’s executive orders freezing payments and interest on federal student loans in response to the pandemic.

Many Democrats are open to the use of executive authority for loan forgiveness. But observers expect a tougher battle over how much relief borrowers receive and how targeted a debt cancellation plan would be.

“Our position is that those who have been ripped off by shoddy schools should get 100% debt relief,” he said.

Critics of big-dollar loan cancellation plans point out that most student debt is held by the highest earners. Borrowers with only a few thousand dollars in student loans are actually more likely to default on their loans than those with big balances.

But in a primary campaign largely shaped by racial justice issues, Warren argued the biggest beneficiaries of her plan would be borrowers of color. Black graduates leave college with thousands more in student debt than their white peers and within a few years that racial gap triples, recent research has found. Those disparities make the strongest argument for wide-scale relief, Dannenberg said.

“It’s sort of an indictment of our giant social experiment in privatizing higher education costs,” he said.

Still, there’s likely to be pressure from other Biden advisers to keep debt relief targeted. Because canceling more debt for each borrower would provide more aid to debt-laden borrowers with high incomes, moderate Democrats favor a narrower approach that would be more equitable and less politically dicey.

But trying to design a program that benefits the neediest borrowers may make it more complicated to award relief quickly, say proponents of broad debt cancellation.

“This is a microcosm of many intra-progressive, intra-left policy debates—whether it’s better to do something universal and achieve something with relative ease or ensure that only those struggling by some definition get relief,” said Mark Huelsman, associate director of policy and research at Demos. “I don’t think that debate is going away any time soon.”

Programs on the Books

Borrower advocates say the Biden administration could also give a boost to student borrowers by fixing loan-relief programs mishandled or neglected by the Trump administration.

Former for-profit college students have filed multiple lawsuits against Education Secretary Betsy DeVos for relief through the borrower defense program. A federal judge threw out a settlement last month between DeVos and borrowers in one lawsuit after a flurry of relief denials.

Even if a Biden administration doesn’t use executive authority for universal debt cancellation, it should use those powers to clear thousands of claims from for-profit college students, said Eileen Connor, director of litigation at Harvard Law School’s Project on Predatory Student Lending and an attorney in several lawsuits filed against the Trump administration. (Connor also advised Warren on her debt relief plan.)

“It’s not worth continuing to talk about whether Corinthian Colleges, for example, or ITT ripped students off,” she said. “Let’s ameliorate the damage that’s been caused here.”

To contact the editors responsible for this story: at csaenz@bloombergindustry.com; at sbabbage@bgov.com