More than a dozen publicly traded companies with revenue of more than $100 million, including , and a Tex-Mex restaurant chain with more than 10,000 employees, received loans through a massive relief program aimed at small businesses.

With a $349 billion lending package for small business owners now , a review of regulatory filings shows that restaurant chains and companies in industries ranging from mining to manufacturing to cruise travel received large amounts, while much smaller businesses like neighborhood eateries and hair salons were locked out.

The disclosures could fuel calls for Congress to provide another round of funding to keep thousands of mom-and-pop firms afloat amid state lockdowns. Negotiations to replenish the tapped-out fund hit a stalemate last week, with Republicans calling for adding more money and Democrats also demanding changes to ensure smaller firms get loans, plus more funding for state and local governments and hospitals. 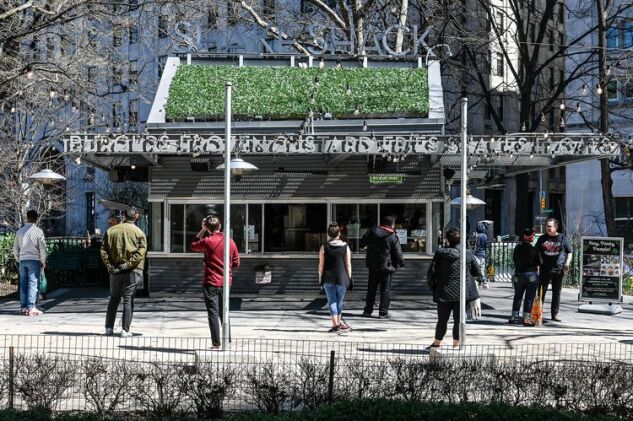 Asked whether such large, publicly-traded companies should be eligible for PPP funds, President on Sunday spoke about the role of franchisees as small businesses.

“I don’t know much about any of those companies. But a lot of times they’re owned by franchisees, where they own one or two places,” Trump said at a White House press briefing. “So a lot of that would depend on what the formula is.”

Certain branches of Potbelly sandwich stores and steak houses, which also received PPP funds, are operated as franchises. Shake Shack says on its website that it doesn’t franchise.

As talks stretched into the weekend, Trump signaled a possible that could add $75 billion for health facilities, in addition to $250 billion more for the small-business program. House Speaker said Congress is to striking a bipartisan deal in an interview with ABC News “This Week With George Stephanopoulos” that aired on Sunday.

Many small firms that flooded banks with applications are livid that they were left out in the cold. One of them is Florida business owner Edgar Comellas, owner of Aces Wild Entertainment, which supplies “Vegas-style” activities and staffing for birthday parties, fundraisers and corporate events. He said he tried to get $10,000 from , but was unsuccessful.

Comellas said he’s upset that money went to larger businesses like , which received $20 million in loans, according to a Securities and Exchange Commission . Ruth’s Hospitality didn’t respond to a request seeking comment. The restaurant chain racked up $468 million in sales last year and employed about 5,700 people.

Ruth’s Hospitality has the individuals “work the papers and lobby and get things to what they need to get $20 million,” Comellas said. “We don’t.”

, the former U.S. Treasury secretary, said on Saturday that eligibility for the PPP should be tightened to “open the window for the smallest businesses, florists, pizza shops, etc.”

In the next round “we need to cut out hedge funds and reinforce the smallest businesses that hold communities together,” Summers said in a tweet summarizing a CNN interview. “We also ought to give money to those who aren’t in life for a profit but are here to help others.”

Some business owners like Lupe Rose found the process disheartening. The co-founder and chief executive officer of SHE Beverage Co., a Lancaster, California, beverage manufacturer and distributor, unsuccessfully applied for a loan through as well as online companies and Rose said she and her team “jumped on a conference call and literally cried with each other” when they heard the money had run out.

“It’s just pretty disgusting that you hear about all of these other businesses who have been funded and who are able to pay for their employees,” Rose said. “While you have businesses like mine that are being buried, small businesses being buried because we believed what we heard.”

The rescue financing -- known as the Paycheck Protection Program -- is intended to help companies that employ up to 500 people, pay workers and certain expenses such as rent for two months. Loans convert to grants if a company maintains its payroll and salaries.

But because the 500-employee cap refers to a single location operated by hotel and restaurant companies, chains like Shake Shack could apply.

Shake Shack is one of the fastest-growing restaurant companies in America, with $595 million in annual sales. While the burger chain has fewer than 500 workers at each site, it had about 7,600 employees spread across numerous locations as of the end of last year. It received the maximum $10 million under the program. The company didn’t respond to a request seeking comment.

The U.S. Small Business Administration program, working with almost 5,000 lenders that disburse the loans, approved applications for $342.3 billion in just 13 days, with the rest of the $349 billion going for fees and processing. There’s no accounting of how much money small businesses have received so far.

A statement from the SBA and the Treasury Department said, “The vast majority of these loans -- 74% of them -- were for under $150,000, demonstrating the accessibility of this program to even the smallest of small businesses.”

But an SBA report showed that about 2% of the firms approved for loans accounted for almost 30% of the funding. The National Federation of Independent Business, the largest group representing small businesses in the country, is calling on Congress to approve $400 billion more for the program -- with not less than $200 billion going to firms that have 20 or fewer employees.

Nine percent of the pot went to companies, such as that got loans of at least $5 million. Fiesta, which owns and franchises Pollo Tropical and Taco Cabana restaurants, said in a regulatory filing that it got $10 million. The company’s annual sales totaled $661 million and it had about 10,500 employees at the end of last year.

A Potbelly spokesman said Congress allowed funding for restaurants because their workers are “vital to our economy.” Representatives for the other companies didn’t respond to requests for comment.

of Small Business Majority, an advocacy group for small firms, said he has been disappointed that larger companies have been able to take advantage of the loan program over smaller ones.

“Most of the money has gone to much larger entities and the very small entities for the most part have been left behind,” he said. “We’re dealing with finite dollars,” Arensmeyer added. “Even if more money is put into the system, we really need to prioritize very small businesses over publicly traded companies.”