Some of the hardest-hit parts of the financial world are finally getting a boost after the Federal Reserve expanded its unprecedented support of credit markets to include the debt of riskier borrowers.

Real estate investment trusts that buy private mortgage bonds, business development companies that lend to small or highly leveraged companies and funds that hold some of the riskiest types of complex debt all surged on Thursday.

The central bank, which until today had limited its stimulus efforts to investment-grade corporate debt and only the safest of mortgage-related securities, unleashed its most potent wave of stimulus as it seeks to keep credit flowing while businesses are shut during the pandemic. Wall Street executives including Apollo Global Management Inc.’s and ’s had called for the Fed to expand its efforts to support credit.

An of mortgage REITs soared 12% as of 12:36 p.m. in New York, after slumping 56% this year through Wednesday. An that tracks BDCs, publicly traded firms that make loans to small and medium-sized businesses, jumped as much as 14% after plunging more than 40% in the past two months. 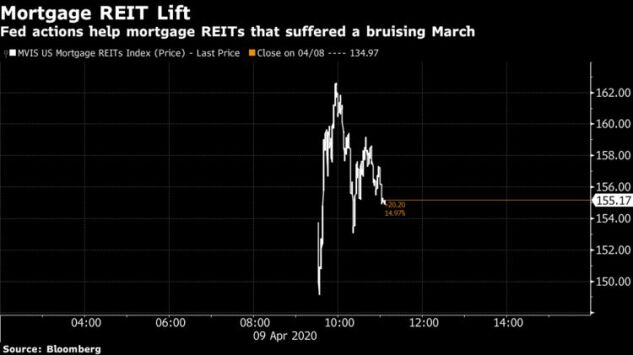 U.S. REITs, which hold everything from investments in offices and shopping centers to home mortgages, had lost $325 billion in value this year through last week. Among the hardest hit are versions that finance residential and commercial loans.

Many had been forced to sell assets after the value of their investments tumbled. Leverage, used to increase returns when times were good, amplified losses, and firms that operate REITs, including , TPG Capital and Apollo, were also swept up in the vortex.

, which invests in commercial mortgage debt and is run by billionaire , jumped 17%. Barrack’s Colony Capital surged 27% and increased 12%.

The Fed’s actions are a win for Barrack, who repeatedly called for the government to intervene in a broader swath of debt markets.

While the Fed’s addition of AAA-rated, non-agency commercial mortgage-backed securities and collateralized loan obligations to the Treasury Asset-Backed Loan Facility falls short everything Barrack called for, “its definitely the correct response at this moment,” he said on Thursday when asked about the measures.

The , a trade group that had also been advocating for expanded Fed purchases, cheered the developments Thursday.

“These are incredibly important steps to further support credit flow to households and businesses,” SFA chief executive officer said in a statement. “It is important to remember that this is not 2008, and the market illiquidity can and should be helped by central bank action.”

Shares of , the largest business development company with $14.4 billion in assets, climbed 14%. 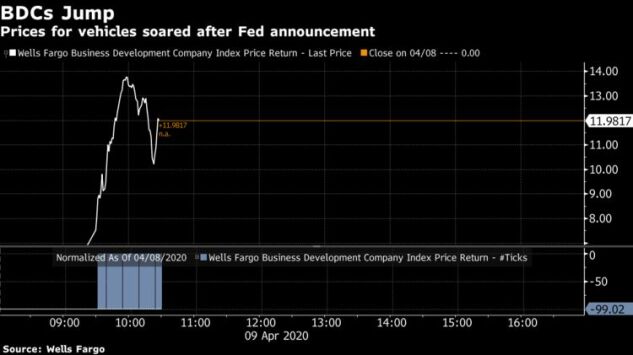 BDCs, which make up a $110 billion pocket of the private credit industry, have been battered in recent weeks as the vehicles’ mostly retail investor base unloaded shares amid fears that the coronavirus pandemic would hit small and mid-sized businesses the hardest.

Shares of and , which invest primarily in the equity of CLOs and lower-rate bonds, also . Eagle Point gained 21% while Oxford Lane jumped 15%.