• Associations were top donors to 147 members who bucked results

When 139 House members and eight senators objected to the results of the presidential election last month, corporate America revolted. More than 30 major companies vowed to cut off donations to those officials.

But the biggest business donors were not companies, but rather the nation’s most powerful trade associations. And unlike corporate donors like AT&T Inc. that have stopped giving funds to these elected officials, only two of the top five trade associations have pledged to pause giving. None said they would permanently end donations.

“That [a pause] to me is sort of the coward’s way out, and essentially meaningless,” said Trevor Potter, former chairman of the Federal Election Commission and legal counsel to the late Sen. John McCain, R-Ariz., co-author of the last major piece of campaign finance legislation. “Right now is a lull. There are very few contributions. They’re not missing Washington fundraising breakfasts.”

The trade groups represent a wide swath of American companies, including auto dealers, bankers, beer wholesalers, and home builders, FEC records show. Political action committees representing businesses and trade groups donated $197 million to the 147 objectors from the beginning of 2015 through 2020, according to a Bloomberg Government analysis of the data.

Association officials said that donating money to candidates, regardless of their political views, is vital to getting work done inside the halls of Congress for their member companies.

After a mob of protestors breached the Capitol, dozens of corporations announced they would suspend contributions to officials who objected. Others stopped giving to federal candidates altogether.

“This has never happened before,” said Craig Holman, a lobbyist for the public interest group Public Citizen who has been studying campaign finance for four decades. “This was a very-first-time event.”

But while corporations are turning the spigot off, much of the money comes to Congress from other avenues.

The Realtors’ group stated it would “temporarily pause all federal political disbursements.” The American Bankers Association said it will not make any political contributions until it completes an ongoing review with its stakeholders. That includes donations to lawmakers directly as well as to any super PACs or political nonprofits.

The other associations have no plans to make changes.

Chuck Fowke, chairman of the home builders, said his group “decided our top priority was to move forward with our mission” and that it wouldn’t alter its campaign contribution strategy. 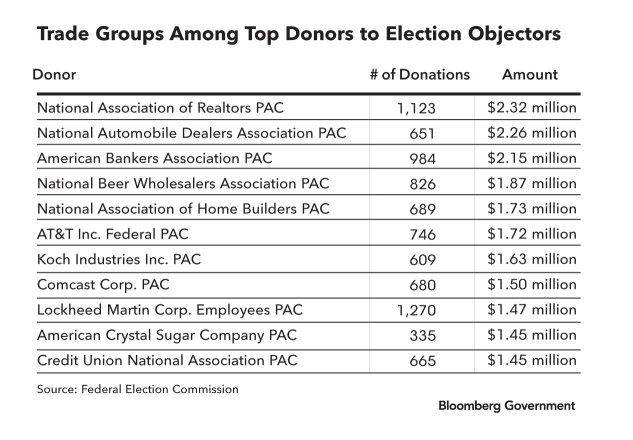 “The best way to advocate on behalf of our industry is to support pro-housing candidates and lawmakers, regardless of political affiliation,” he said in a statement.

The auto dealers’ group is “currently assessing” its political contributions going forward, but did not commit to a freeze. The beer wholesalers group said only that it was evaluating its contribution strategy.

The donations covered in the giving boycott were in the form of corporate-controlled, political action committees, which can only give $5,000 per election to each candidate. Those donations pale in comparison to the financial firepower of “super PACs” and “dark money” organizations, which collect huge donations from corporations and individuals, and then use the funds to attack, or occasionally support, candidates on the airwaves.

The Realtors, for example, gave $6.6 million to the Senate Leadership Fund in the 2020 election cycle, according to the FEC. The majority of the super PAC’s spending went into attack ads aimed at Democratic Senate candidates.

The Realtors group did not respond to whether it intended to pause super PAC giving as well. Only the bankers’ group told Bloomberg Government that it would also cut off funds to super PACs.

Super PACs can accept corporate funding, but the most prolific donors are often billionaires, like Charles Schwab and the late casino mogul Sheldon Adelson. Major corporate donors to the fund include oil companies Chevron Corp. and Marathon, Koch Industries, and Boeing.

And it’s a bipartisan phenomenon. Democrats created the Senate Majority PAC, which raises money to attack Republican candidates for Senate.

No candidate benefited from the Senate Leadership Fund’s largesse in the 2018 election cycle as much as Republican Josh Hawley of Missouri, who became the first senator to announce he would object to the presidential vote certification. The group spent more than $20 million on ads attacking his then-opponent, incumbent Democrat Claire McCaskill.

Groups advocating changes to campaign finance laws praised the corporate donation halts, but said they are reserving some skepticism.

“In some ways, I find it refreshing,” Public Citizen’s Holman said. “In other ways, I am skeptical that it will have a long-term effect.”

What happens, for example, when a major issue comes up on Capitol Hill that affects a company that has cut off funds and it wants an audience with a lawmaker, and other corporations are still making donations?