Senate Republicans revised their economic stimulus package, but as of Sunday afternoon, have yet to reach a deal with Democratic leadership.
Photographer: Al Drago/Bloomberg

Senate Majority Leader scheduled a vote Monday to try again to advance a $2 trillion stimulus plan after Republicans and Democrats failed to engineer a quick jolt to a sinking economy amid the rising coronavirus death toll, plunging financial markets and dire predictions of a deep recession.

The Senate will take a vote at about about 1:30 p.m. Washington time aimed at getting the legislation to the floor. But the chamber’s Republican majority can’t do it without the votes of Democrats. 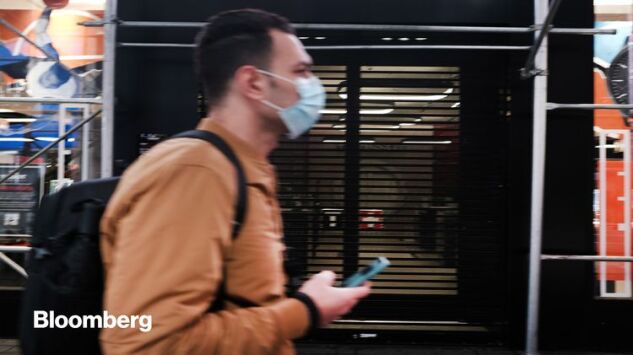 “Why are the American people still waiting?” McConnell said on the Senate floor before scheduling the vote. “The markets are not doing well today.” 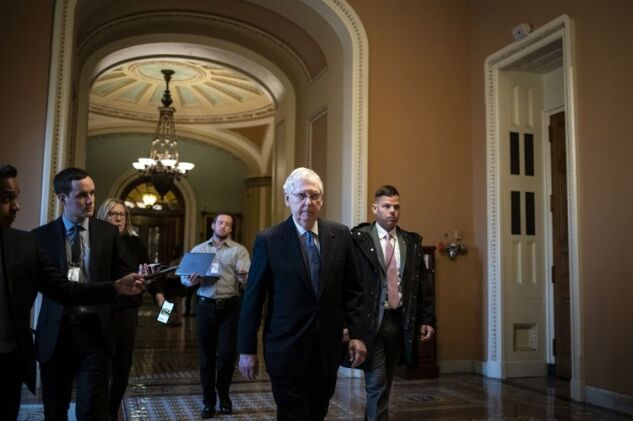 Mitch McConnell, center, walks to his office in the U.S. Capitol on March 23.
Photographer: Al Drago/Bloomberg

Democratic leader said he has had “almost continuous negotiations” with Treasury Secretary on Sunday and Monday. He said they are close to reaching a deal and his goal is to do so Monday.

While many details of the plan had been hashed out, some fundamental differences hadn’t been bridged. The recriminations began immediately after McConnell’s first bid for a procedural vote failed Sunday.

An incensed McConnell on Monday cited plummeting stock markets to express the urgency to act Monday, and the Kentucky Republican ripped Schumer and House Speaker .

He accused Democrats of pushing for unrelated “wish-list items” such as solar energy tax credits and new emission standards for airlines. “This is the moment to debate new regulations that have nothing whatsoever to do with this crisis?” McConnell said.

On Sunday, Schumer complained that McConnell’s bill was partisan. He said it amounts to “a large corporate bailout” with insufficient oversight, and shortchanges the health-care response to the pandemic. He said there should be “much more money” for hospitals for equipment that is rapidly becoming in short supply.

President sounded an optimistic note after Sunday’s failed vote, saying, “I think we’ll get there.” But there signs that he was growing frustrated with the broader situation in the country. Trump began talking privately late last week about reopening the nation because he’s worried about the economic damage from an extended shutdown, according to people familiar with his thinking.

Senators from each party said Monday they expected a deal. In one potential sign of movement, Senator Chris Coons, a Delaware Democrat, Senators have agreed to provide funding for an an accountability board for the $500 billion bailout fund. That’s a key Democratic demand, but the details had yet to be worked out.

“I don’t see that there is yet final agreement on the language of what is the scope of that accountability board,” he said on Bloomberg Television. Negotiations were ongoing Monday morning, he said. 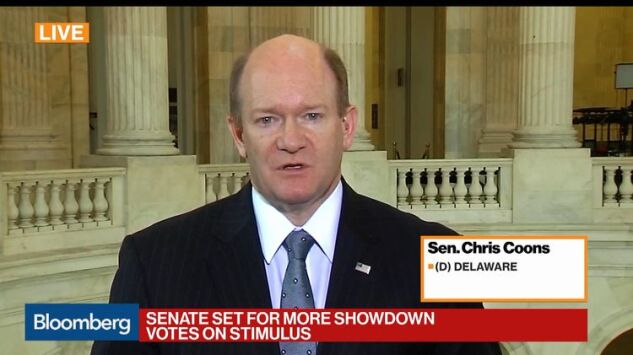 Financial markets have been roiled by the impact of the pandemic as it forces businesses to shutter and governments to keep people inside. The S&P 500 dropped at the open Monday, and the index has now erased almost all gains accrued during Trump’s presidency.

McConnell at one point threatened to use the market turmoil to force the hand of Democrats, saying he would schedule another procedural vote for 9:45 a.m. Monday, “15 minutes after the markets open, and see if there’s a change of heart.” The Senate later adjourned until noon.

The prospect of an election-year market meltdown will revive memories for many lawmakers of the standoff over the bank rescue plan amid the 2008 financial crisis.

In September of that year, the House unexpectedly rejected President George W. Bush’s $700 billion Troubled Asset Relief Plan to bail out banks in the wake of the subprime mortgage collapse and to restore confidence in credit markets. The defeat was the result of a revolt by rank-and-file Republicans against their own president and it sent the Dow Jones Industrial Average down almost 7 percent.

McConnell and then-Senate Democratic Leader worked to usher it through the Senate on a solid 74-25 majority two days later. Then on Oct. 3, the House reversed and narrowly cleared the legislation and sent it to Bush for his signature.

Until Sunday’s procedural vote on the stimulus plan, Republicans insisted that an agreement with Democrats was close to fruition.

To attract Democrats, McConnell had agreed to many of their demands, adding hundreds of billions of dollars in fresh spending, including a $600 per week increase per worker in unemployment benefits, a $75 billion public health package, and tens of billions more for transit, education, nutrition and assorted other programs.

But Democrats, including Schumer and Pelosi, who flew into Washington Saturday, said a $500 billion chunk of the bill that can be used to help corporations, including airlines, gave too much discretion to the Treasury secretary and that it lacked transparency and accountability. They also said the aid for state and local governments and health care providers fell far short of what is needed.

Republicans and Democrats have differed from the start 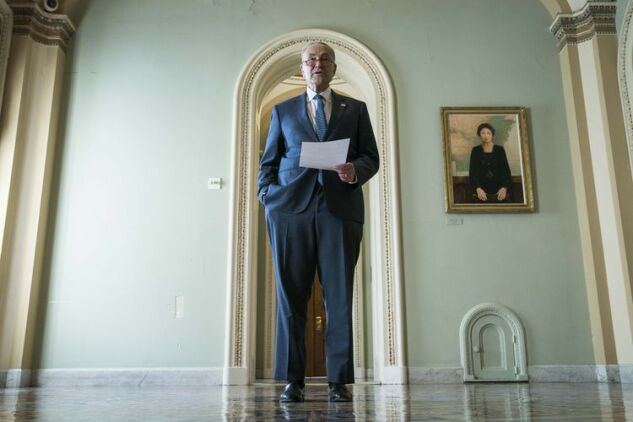 on how much of the money should go toward traditional aid programs like unemployment insurance, food aid and similar programs.

Many of those differences appeared to be resolved during the day Saturday as four groups of senators worked out differences. But sticking points remained, particularly when it came to final details such as who would oversee the disbursement of the aid for companies and how that would be disclosed. One Democratic aide said the package could theoretically be used to bail out the president’s own company without voters knowing about it for months.

The total package includes about $2 trillion worth of proposals, including $350 billion for small businesses, a $500 billion chunk of the bill that can be used for loans to larger corporations including airlines or state and local governments, extensive corporate tax breaks and tax deferrals, and direct payments of $1,200 for middle-class and low-income Americans.

Pelosi left a meeting in McConnell’s office earlier Sunday saying they had no deal and the House would write its own package -- a move that could add days of partisan wrangling. Pelosi later told House Democrats that the Senate bill was “very different” from the package they were crafting.

Even before the defeat of the Senate’s procedural motion, House Democratic leaders were not planning to call the chamber’s members back to Washington on Monday, or even Tuesday. House Democrats have instead scheduled a caucus-wide telephone call Tuesday afternoon, rather than bringing members back by then, senior Democratic aides said.

A major package remains likely, but it now could take additional time for the two parties to work out their differences, even as the virus continues to ravage not just the nation but Congress itself.