An inmate holds onto a fence at the Louisiana State Penitentiary in Angola, Louisiana.
Photographer: Mario Tama/Getty Images

Families transferring funds to relatives in state prisons have no choice but to pay fees that can take more than a third of their money off the top—an expense that lingers even as the cost of sending money plummets everywhere else.

The average fee to wire $20 to an incarcerated person in a state-run prison nationwide is 19% ($3.80), but ranges from 5% ($1) in some states to 37% ($7.40) in others, according to a recent Prison Policy Initiative study. Almost all of the money goes to the three private companies that monopolize the market.

“There really hasn’t been any organized pushback to this,” said Juliene James, the vice president for criminal justice at Arnold Ventures, a philanthropic investment fund.

“Maybe there were costs historically,” she says, “but we’re living in the age of Venmo.”

The three companies working in state prisons—JPay, Global*Tel Link, and Access Corrections—defend the fees as needed to ensure heightened security, data collection and other requirements set by prison authorities, which they claim significantly raise the costs for wiring cash.

Services like Venmo, which operate outside of the prison context, don’t have the necessary security and other features offered by companies that serve prison populations, Securus Technologies, a unit of private equity firm Platinum Equity Partners, which operates the payments platform JPay, said in a statement.

“Facilities contractually require security protocols for storing data, they also have the ability to withhold or reject funds based on security concerns,” the company said.

But the companies—two of which are owned by the same private equity-owned businesses that dominate the state-prison telephone market and the third operating prison commissaries—aren’t doing much more than the same security checks that other money transmitters do at a fraction of the costs, said Bianca Tylek, executive director of Worth Rises, an advocacy group that focuses on privatization of the criminal justice system.

There’s no reason why the services offered by JPay, Glogal*Tel Link and Access corrections should cost much more than those offered in the private sector, she said.

“They know that the people that use their service don’t have more,” Tylek said. “So they have the highest fees at the lowest amount.”

Sending money in the private sector using popular money transfer apps Venmo and PayPal is free from linked bank accounts or balances, and costs about 3% from credit cards.

Securus’s JPay unit, and Global*Tel Link (GTL) are two of the largest players in both prison telecoms and money transfer market at the state level.

“The allure of the bundled contract is very strong” for state prison bureaus, said Stephen Raher, the Prison Policy Initiative’s general counsel and an author of the report, released in November.

The third big player in the market is Access Corrections, which is a part of the Keefe Group companies that operate commissaries and other prison services. Keefe is owned by private equity firm H.I.G. Capital. 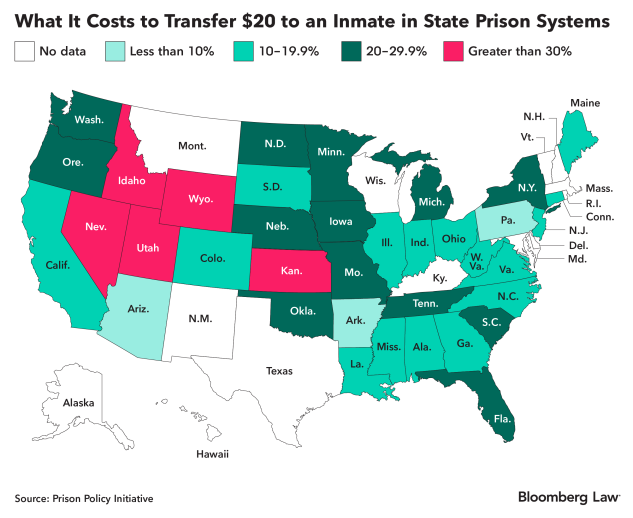 JPay said in a statement that the average payment made through its online services around the country is $50 and carries a 14% fee, which it claims is lower than Western Union and comparable to rates offered by MoneyGram and Walmart’s payment services.

While the Prison Policy Initiative report focused on transfers of $20 and $50, different states have different minimum amounts that can be transferred, JPay said.

The money sent by family and friends to inmates is needed to pay for instant noodles and other snacks to supplement poor diets, dental care, basic medical expenses, and toiletries ranging from shampoo to toothpaste, activists say.

Black people made up the largest segment of the prison population at nearly 390,000, followed by White and Hispanic people, the Bureau of Justice Statistics found. It said 938 of every 100,000 Black Americans was in prison in 2020, by far the highest proportion in the American population.

The poverty rate among Black Americans stood at 19.5% in 2020 and for Hispanics at 17%, according to the U.S. Census Bureau.

A 2020 report from the American Action Forum, a conservative think tank, found that overall, 57% of men and 72% of women arrested lived in poverty.

Prison money transfer fees are falling hardest on those that can least afford it, said Miriam Krinsky, executive director of Fair and Just Prosecutions, an advocacy group. “It is somewhat of a high-profit industry that is making money on the backs of people that are incarcerated,” she said.

How much a family or friends end up paying to send money to loved ones depends on where they live and the terms of the contract that state prison authorities sign with service providers.

Arizona offers the families and friends of inmates three different options, including from JPay and GTL, to wire money into prisons with a 5% fee across the board on $20 transfers, the lowest found by the Prison Policy Initiative.

Other states, like Arkansas and Maine, provide their own state-run money transfer services, with Arkansas charging 10% on a $20 transfer and Maine a 12% fee. Arkansas also allows JPay to run a competing service, and the company charges 9%.

Representatives for the Arkansas Department of Corrections didn’t respond to a request for comment.

California, the state with the largest incarcerated population, allows all three major prison money transfer operators to provide services to its prisons. JPay charges 10% on a $20 transfer, Access Corrections 18% and GTL 20%, according to the Prison Policy Initiative.

The California Department of Corrections & Rehabilitation “is committed to providing effective options to friends and family who transfer funds to their incarcerated loved ones,” the agency said in a statement.

California puts out a request for bid every two to three years, and a new request is expected to go out in 2022, the CDCR said.

“To be considered for the contract, the company must have a history of working with a large incarcerated population, and the service must be free to CDCR,” the agency said.

Kansas, Nevada and Utah, have rates as high as 35% per $20 transfer. Officials in those states didn’t respond to requests for comment.

The Federal Bureau of Prisons offers money transfer services through MoneyGram International and Western Union, while each private prison that the federal government contracts with has its own contracts.

The agency also found that prison populations dropped significantly around the country through a combination of compassionate release programs and other factors in 2020.

States also provide less expensive, even free options for sending money to incarcerated people, but they often come with problems that make them less attractive than simply wiring in the money.

Most states provide so-called lock boxes, often operated by the same companies that run the online money transfers. Families can can deposit checks or money orders either through the mail or lock boxes and then have them delivered to their loved ones. Both options come with their own fees.

The lock-box option can be done either in person, which would involve a trip to visit an incarcerated loved one, or through the mail.

State and federal prisons are often located hours from major population centers, making it difficult and expensive for people to visit, and mailing in money presents its own problems. JPay says that it processes mailed in checks and money orders within 10 days, but other services can take longer.

“It might be three or four weeks before money that you send by check or money orders get to people,” Tylek said.

Some government agencies have taken notice of the market for prison financial services.

The CFPB in October ordered JPay to return $4 million to formerly incarcerated people and pay a $2 million fine for charging improper fees on debit cards issued to people upon their release from prison. The cards contained money either remaining in their commissary or other accounts or earned through labor in prison.

Tylek and other criminal justice reform activists say they’ve been in touch with the CFPB about money transfer fee concerns, although the bureau declined to confirm whether it had met with them.

“More broadly, any suggestion that a consumer is being taken advantage of is troubling,” the CFPB said in a statement to Bloomberg Law.

Raher added that he’d been in contact with the New York attorney general’s office, which didn’t respond to a request for comment.

The Federal Trade Commission also has the power to investigate money transfer fees for prisons. State legislatures could also move to cap transfer fees, as several have done with fees for phone calls.

The money families and friends send into the prison systems is largely meant to allow incarcerated people to buy basic necessities, said James of Arnold Venture.

Many states charge inmates for room and board as well as email, text, and other communications with the outside world, with much of the money wired in going to private companies, she said.

Ebony Underwood, the founder and CEO of We Got Us Now, a national advocacy group for the children of incarcerated parents, said during the 30 years her father spent in federal prison, her family sent him money for everything from Ramen noodles to shampoo, toothpaste, and deodorant, to clean underwear and socks.

While federal prison rates can be lower than in state prisons, the transfer fees still amount to “the commoditization of our love,” Underwood said. “We, at the end of the day, are being punished just to stay connected with our parents.”

To contact the editors responsible for this story: at ghenderson@bloombergindustry.com; at mferullo@bloomberglaw.com;