is in the final stages of resolving its biggest legal threat in a decade after tussling with the government on one critical issue: a potential guilty plea for the first time in Goldman’s history.

To avert such a penalty over its work for a Malaysian sovereign fund, Goldman has appealed to the Justice Department’s highest ranks. Attorney General began overseeing the case after obtaining a because his former law firm represents Goldman. The department’s No. 2 official has also been directly involved.

Now, a deal may be near. Prosecutors were emboldened to press Goldman for a guilty plea after a high-ranking Goldman banker pleaded guilty in 2018 and a secretive corporate culture that sidelined compliance staff, people familiar with the case said. Since then, Goldman has pushed back on that narrative and elevated its case to the nation’s top law enforcement officers.

Goldman’s defense is led by . She was brought in two years ago as general counsel with a mandate to end the years-long U.S. criminal investigation over the billions of dollars Goldman raised for the Malaysia fund, known as 1MDB. Much of that money was allegedly siphoned by people connected to the country’s former prime minister. 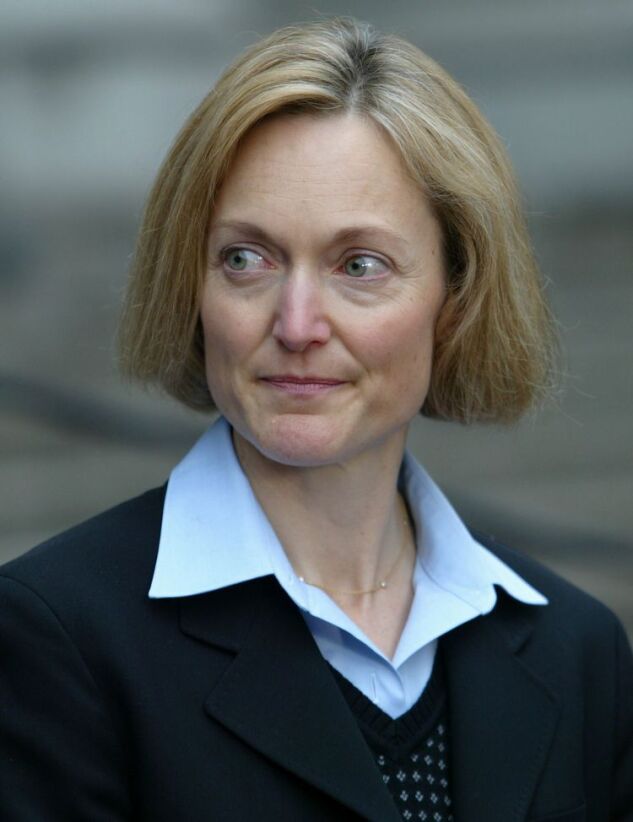 Karen Seymour after the verdict was read in the Martha Stewart trial in 2004.
Photographer: Rick Maiman/Bloomberg

If Goldman escapes without a guilty plea, it will be a big victory for the bank. If not, Seymour may still be able to soften the blow by bartering over what details are included -- and not included -- in a statement of facts outlining Goldman’s conduct in Malaysia.

, a Goldman Sachs spokesman, wouldn’t comment on the status of the negotiations. “We are trying to resolve this matter as expeditiously as possible,” he said.

John Marzulli, a spokesman for the U.S. attorney’s office in Brooklyn, New York, that’s handling the case, declined to comment.

Seymour, 59, knows from her experience representing Goldman as an outside lawyer that an all-out battle could backfire. The bank tried that approach a decade ago after the Securities and Exchange Commission accused it of fraudulently marketing a mortgage investment known as Abacus that was secretly meant to fail.

Whereas banks typically respond to new investigations with deference and promises to cooperate, Goldman hard against the SEC action, vowing to defend itself and describing the SEC’s allegations as “completely unfounded in law and fact.” Over several months, the legal exposure and bad publicity lopped almost 25% from the firm’s market value.

At the time, Seymour was a partner at , Goldman’s outside law firm, and was dispatched to clean up the mess generated by Goldman’s fighting words. Ultimately, she negotiated a pact with the SEC that included a hefty $550 million fine but no admission of wrongdoing.

In the 1MDB case, the bank is awaiting word from Justice Department leaders about whether they agree with their prosecutors in Brooklyn that any deal must include a by a subsidiary in Asia, according to a person familiar with the matter. (Prosecutors’ insistence on an admission of guilt was reported earlier by the New York Times and the Wall Street Journal.) A decision would clear the way for a settlement, the person said.

Once the Justice Department renders its decision about a guilty plea, a resolution could follow quickly, including a as high as $2 billion.

The sprawling investigation into 1MDB, known formally as , is the biggest threat to Goldman Sachs since the darkest days of the 2008 financial crisis.

In September of that year, following the collapse of Lehman Brothers and the sale of Merrill Lynch to Bank of America Corp., the Federal Reserve allowed Goldman and Morgan Stanley to convert themselves into bank holding companies, giving them access to the Fed’s discount window and allaying concerns about their viability. The Abacus case grew out of the mortgage meltdown at the center of the crisis.

In Malaysia, Goldman helped the government raise $6.5 billion for the 1MDB fund, collecting an unusually high $600 million in fees from bond sales in 2012 and 2013, according to court filings in the case. Prosecutors allege that roughly $2.7 billion of that money was diverted to 1MDB officials and their associates.

Prosecutors have received help from , a former Goldman banker who led the fund-raising for 1MDB. He to conspiracy to bribe foreign government officials and money laundering. Goldman says Leissner was a rogue actor who deceived his superiors at the bank. Prosecutors appear to have taken a different view, that Leissner was acting in his capacity as an agent of the bank.

Seymour is probably best known for her work as a federal prosecutor in winning the 2004 conviction of , who made false statements to prosecutors conducting an investigation of her stock trading.

A Texas native, Seymour served as a federal prosecutor in Manhattan the 1990s before moving to Sullivan & Cromwell. She returned to the office, known as the Southern District of New York, in 2002 to serve as head of its criminal division under then-U.S. Attorney .

Friends and former colleagues say Seymour’s biggest asset in her current role is her history negotiating with the government on behalf of global banks including Goldman and BNP Paribas SA.

“She is the picture of credibility and integrity,” said of Willkie, Farr & Gallagher, who was Seymour’s co-prosecutor in the Martha Stewart case. “When you are trying to represent a financial institution in a government negotiation, nothing is more important than making sure the government is able to trust what they’re hearing, and nobody inspires trust in their word like Karen Seymour.”

The bank is separately negotiating a settlement with Malaysian authorities, who recently said they would reject offers of as much as $3 billion in contrast to the previous administration that had lower figures.