Initial calls for racial audits at Wall Street banks and other corporations were rejected by shareholders, but support was high enough that companies are likely to face increased pressure to agree to future reviews.

Shareholder proposals for independent racial audits filed at and received backing from more than a third of shareholders at annual meetings this month. At , 29% of shareholders voted for an audit at the company’s annual meeting Thursday. The investors’ recommendations called for a deep-dive analysis into the companies’ business models -- from policies to products and services -- to determine whether they cause or perpetuate racial inequities.

While the proposals failed to pass, enough shareholders voted for them to send “a warning shot that the companies should take notice,” said , an environmental, social and governance analyst at Bloomberg Intelligence. The next step would be for proponents to withhold support for directors that oversee the issue, such as those on the corporate responsibility or risk committees, he said.

The racial audits are part of a broader by shareholders to hold companies accountable for statements of support they made to minority communities last year after the killing of George Floyd by police prompted widespread protests. Shareholders also want companies to provide more transparency about the diversity of their employees and how their political contributions line up with their social positions.

, and Service Employees International Union were the investors that filed proposals calling for racial audits. , the world’s largest asset-management firm, with its financial-services peers earlier this month by agreeing to perform one, joining companies including and that have conducted audits in recent years.

Color of Change, the influential racial justice group, is also on Alphabet Inc.’s Google to allow an independent racial audit following the of two women who led the company’s Ethical AI team.

Overall shareholder support for activists’ social proposals is rising. About 29% of shareholders voted in favor of social proposals opposed by companies so far this proxy season. That’s the highest in at least six years, and up from 22% in 2016, according to data compiled by Bloomberg. 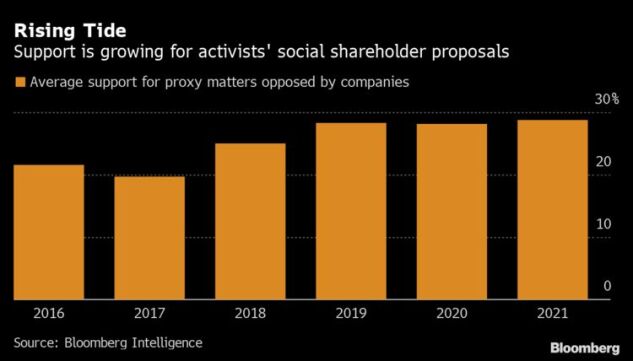 Still, shareholder proposals opposed by companies typically fail. Among more than 700 such proxy resolutions under consideration this season, less than three dozen have passed so far, figures compiled by Bloomberg show. If support appears high enough for a proposal to pass, companies typically ask activists to withdraw the proposal and negotiate, rather than face a defeat in the voting.

More than 25% of ’s shareholders supported a proposed racial-equity audit. A similar resolution filed with garnered 13% of votes, the least among the companies so far. The lender has said it hired a third party to conduct a human-rights assessment, which includes a focus on racial equity, and will publish a summary of the results.” 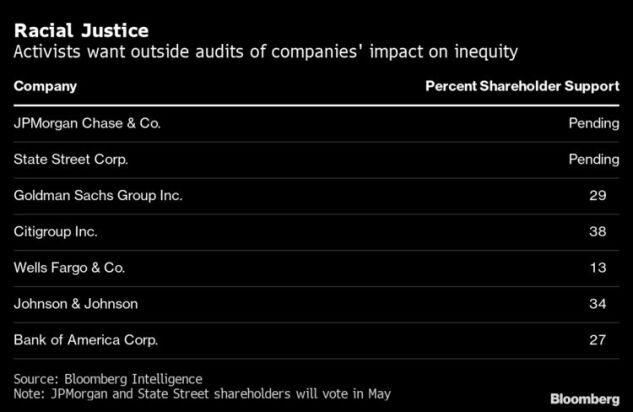 All the companies recommended that investors , saying they’ve already taken measures to address discrimination, such as investing in Black entrepreneurs, expanding credit and working to boost diversity within their ranks. Last year, Goldman Sachs became the only bank to say it wouldn’t underwrite public offerings for companies that lack a diverse board.

CtW said the only way to effectively address racial injustice and economic inequality is to study how the industry’s products and services contribute to imbalances. That would include analyzing things like mortgage lending, the number of bank branches in minority neighborhoods and corporate political contributions.

Citigroup last year saying closing racial gaps would have generated an additional $16 trillion in U.S. economic output since 2000. The U.S. could gain $5 trillion more of economic activity over the next five years by ending the various gaps between Black and White Americans, analysts at the New York-based bank concluded.

Citigroup was among the companies that asked regulators to block the racial-audit resolution. Similar proposals are up for votes next month at , and

(Updates first chart, and adds details about Google in sixth paragraph and pension funds in the 10th.)

To contact the reporters on this story:
in New York at skishan@bloomberg.net;
in Southfield, Michigan at jgreen16@bloomberg.net