The Consumer Financial Protection Bureau saw a 60% spike in consumer complaints in 2020, a development expected to lead to an increase in enforcement activity under the Biden administration, which has promised to be tougher on financial institutions.

Consumers filed nearly 445,000 complaints with the bureau in 2020—the greatest one-year total on record—compared with 277,366 in 2019, according to a Bloomberg Law data analysis. Many of those complaints were driven by new requirements placed on institutions like mortgage servicers, consumer credit bureaus, and student loan servicers to help customers survive Covid-19 pandemic-induced financial shortfalls.

Banks, debt collectors, credit bureaus, and other companies have raised concerns that the CFPB’s database publicizes unverified consumer complaints. But those complaints, verified or not, often provide a guide for the agency’s enforcement attorneys.

The jump in complaints for 2020 gives the CFPB’s enforcement staff a bundle of leads to follow, particularly with new leadership promising more aggressive enforcement than the leniency on complying with pandemic-related regulatory changes the Trump administration gave to companies.

“You have a change in administration and everything’s different. Even if you thought you were going to have a more forgiving agency, now you don’t,” said Lucy Morris, a former CFPB deputy enforcement director.

The CFPB isn’t the only federal regulator to compile a consumer-complaint database, but it is the only one to make the information public.

“Complaints are always one of the biggest factors in targeting for enforcement investigations,” Morris, now a partner at Hudson Cook LLP, said. 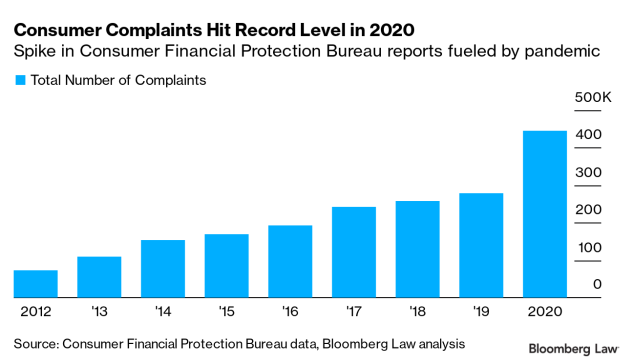 Rohit Chopra, President Joseph Biden’s CFPB director nominee, said at his March 10 confirmation hearing that the bureau would “need to look at where we see consumer complaints to conduct trend analysis” as part of the way it will determine its enforcement and investigative priorities.

The industries the CFPB could turn to first are those that saw Congress provide specific pandemic-related consumer relief in the CARES Act, the first federal relief package passed in March 2020.

The CARES Act said that consumer credit reports shouldn’t be damaged if borrowers fall behind on any payments after losing their jobs or seeing their hours cut back at work because of the pandemic.

Credit reporting has by far been the subject of the most CFPB complaints since the database was opened to the public in 2012. The industry, dominated by Equifax, Experian and TransUnion, has seen more than 620,000 complaints since 2012, with the next closest industry, debt collection, receiving around 330,000 in that same period.

The same held true over the course of 2020, with consumers reporting nearly 239,000 complaints between April and December 2020 against credit bureaus. That was a 117.4% leap from the same period in 2019. It also dwarfed the next-highest number of complaints submitted to the bureau—debt collection at nearly 42,000 complaints, according to the Bloomberg Law analysis. Credit reporting also saw the highest percentage increase by far, topping the 76% growth in money transfers and virtual currency complaints. 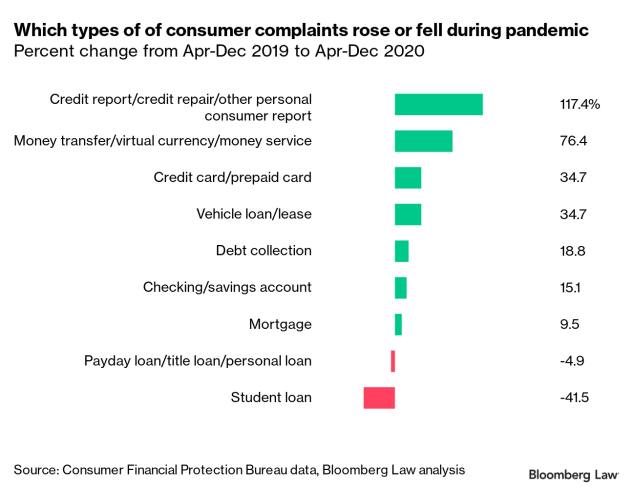 Exactly how many complaints were related to Covid is impossible to say since the pandemic is not listed as a specific category. But virus-related terms turned up at least 11,500 times in the April through December 2020 data.

“It just shows that the harmful practices that existed before 2019 still occurred last year and that new ones sprung up,” said Christine Hines, the legislative director for the National Association of Consumer Advocates.

Francis Creighton, the president and CEO of the Consumer Data Industry Association says that there was “no evidence” that the increase in complaints was a “result of a problem with credit reporting,” instead attributing the uptick to credit-repair firms that “spam the complaint portal” after misrepresenting their ability to help consumers.

“We do not believe the complaints in the CFPB database are an accurate reflection of consumers’ experiences with credit reporting agencies,” Creighton said. 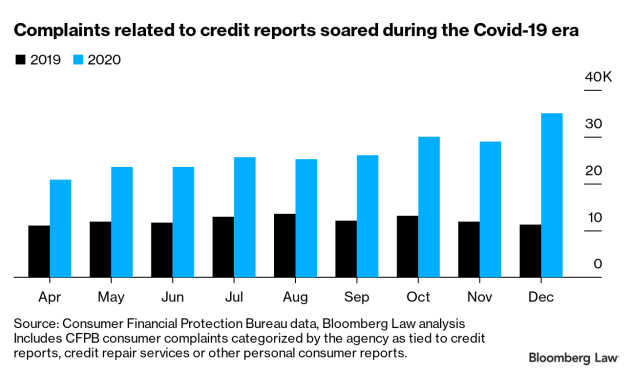 Consumer complaints won’t be the only guiding force for CFPB enforcement and supervisory staff. The bureau has also focused on mortgages under Biden’s leadership, even though mortgages only came in fifth among industries in total complaint volume in 2020.

“While complaints are always a factor in CFPB priority-setting, they’ve made clear that mortgage servicing will be in the crosshairs regardless of complaint volume,” said Michael Gordon, a partner at Bradley Arant Boult Cummings LLP and a former top CFPB official.

‘Breathing Down Your Neck’

The Trump-era CFPB provided companies with some leeway in dealing with consumers. One example is extending the amount of time credit reporting bureaus had to investigate disputes if they showed a “good-faith effort” to meet regulatory deadlines.

Other industries got similar leniency for “good-faith” efforts to meet legal and regulatory standards for dealing with consumers.

“What the agency was doing last year was giving relief to the financial entities. It was giving them the flexibility to do nothing,” Hines said.

CFPB Acting Director Dave Uejio suspended all CARES Act guidance in a March 31 order, meaning the bureau is likely to go back and look at how companies did when the guidance was in place.

“If you messed up, then you’re going to have someone breathing down your neck,” said Allison Schoenthal, the New York head of Goodwin Procter LLP’s consumer financial services litigation group.

To contact the reporter on this story: in New York at eweinberger@bloomberglaw.com; in Washington at akessler@bloombergindustry.com