When Congress gave the Federal Reserve $750 billion of emergency firepower to backstop the country’s biggest companies, some lawmakers insisted on inserting a clause that now threatens to undermine the program -- and could pose a major problem if markets go haywire again.

Under the stimulus bill passed last month to combat the coronavirus crisis, the central bank is wading into corporate credit markets for the first time since the 1950s. One Fed facility will lend directly to companies and another will buy bonds in the secondary market. Yet the legislation also imposed a key condition: Only a borrower with “significant operations in and a majority of its employees based in the United States” is eligible for Fed support.

That wording was left deliberately vague, according to people who participated in the congressional , and may leave out hundreds of companies with far-flung operations, including Coca-Cola Co., General Electric Co. and Mastercard Inc. No one knows for sure.

“There is some confusion,” , chief executive officer of State Street Corp., an administrator and custodian for several Fed credit facilities, said in an April 23 on Bloomberg Television. “These programs were stood up quite quickly.” 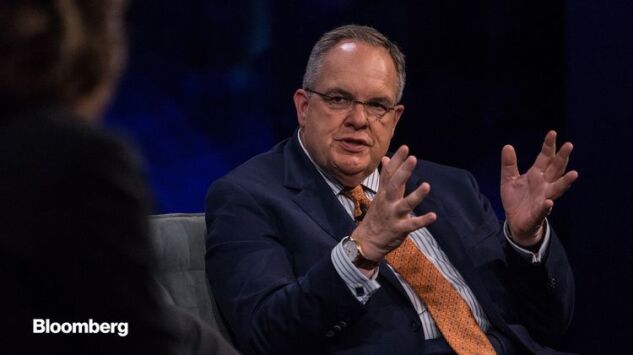 The situation is creating headaches for Fed officials at a time when the central bank is playing a critical role preventing the Covid-19 outbreak from crushing the economy, people familiar with the matter said. In practical terms, restricting what it can and can’t do means the Fed might not be to supply all the liquidity needed to prop up prices if there’s another meltdown in credit markets.

And while the worst of the strain on markets seems to be over, no economic forecaster can yet predict the shape of the recovery. Even the strongest of companies may struggle to borrow in the future.

Also hamstrung is BlackRock Inc., the investment firm retained to manage the corporate lending and bond-buying facilities. Fed officials and BlackRock executives are working out how to execute the program under the legislative constraints, the people said, declining to be identified because of the sensitivity of the issues.

Spokespeople for the Fed and BlackRock declined to comment.

The clause at issue -- requiring program participants to have “significant” operations and a majority of their employees in the U.S. -- found its way into the stimulus bill during the intense and politically charged negotiations that preceded its passage. Democrats insisted on limiting the program to American companies, while the Trump administration pushed for wiggle room in the language, according to people with knowledge of those discussions.

Part of the problem is there’s no easy way to determine which borrowers meet the eligibility test. Of the 566 U.S.-domiciled companies rated BBB- or better by Standard & Poor’s, only a handful disclose how many employees are based in other countries. In addition to Coke, GE and Mastercard, they include drug company Merck & Co.; Deere & Co., the tractor manufacturer; and toymaker Hasbro Inc., As JPMorgan Chase & Co. analysts noted in an April 20 report, the rest require an “informed guess.”

The Fed, in an unusual step, is requiring would-be borrowers to certify themselves by filling out a form, which isn’t yet available.

“This change in the mechanics means the program will be slower to get off the ground, as issuers will now need to assess the requirements as well as risks of attesting eligibility,” JPMorgan said in the report.

Also unclear is whether U.S. subsidiaries of foreign companies can participate in the program, the people familiar with the deliberations said. If so, it’s possible BlackRock could buy bonds issued by Toyota Motor Credit, a Plano, Texas-based unit of Japan’s Toyota Motor Corp., but have to steer clear of GE’s or Hasbro’s -- a quandary seemingly at odds with the intent of the legislation.

Last month, as the pandemic sent stocks crashing and choked off credit, the Fed announced a suite of new stimulus programs including two facilities explicitly to help corporate borrowers at low risk of default.

One allows the central bank to provide as much as $500 billion of primary credit by lending directly to companies or buying bonds at issuance. The other gives it $250 billion to buy existing bonds in the secondary market. The New York Fed hired BlackRock, the world’s largest asset manager, the following day.

Buoyed by the prospect of Fed spending, debt markets roared back. Investment-grade bond spreads have mostly recovered after blowing out in March to the highest levels since the financial crisis, and investors are record sums into high-yield funds.

Yet the program that spurred all the buying still exists on paper only. New York Fed Executive Vice President said in an April 17 speech that the facilities will “go live” in the next few weeks. In the meantime, all that’s available are two-page term sheets and an FAQ.

For companies, the Fed could be a critical backstop if access to debt capital dries up again.

“Liquidity in both primary and second markets is fine at the moment but this could easily change, in which case the devil will be in the details as to the Fed’s ability to react,” the JPMorgan analysts said in a separate April 24 report.

One question is how many will choose to self-certify, with the possibility they’ll be stigmatized for taking Fed money. JPMorgan compiled a list of those borrowers likely to be eligible and sign up because of funding-cost pressures. It contains only 33 companies.

The hurdles may leave the Fed relying on ETFs to forestall the next credit crash. Under the program, the central bank can buy exchange-traded funds that hold a range of corporate debt, even if some of those bonds wouldn’t qualify on their own.

But because BlackRock’s is the largest corporate-bond ETF, that could put the firm in the awkward role of using its own product to fulfill the Fed’s mandate.

The Fed has already encountered scrutiny over its newly granted power to intervene in debt markets and pressure from lawmakers about transparency. Last week the central bank said it would disclose the names of borrowers and details such as amounts and rates charged.

State Street’s O’Hanley said Fed officials made adjustments for other programs, so he’s confident the confusion around the corporate credit facilities will be resolved. The stakes are simply too high.

“Investors know that if they needed to sell, there’d be a market,” he said. “If they had concerns that there weren’t a market, because of some gap in buying and selling, then you’d have a real crisis.”

To contact the reporters on this story:
in New York at eschatzker@bloomberg.net;
in Washington at ctorres3@bloomberg.net