Barring a surprise on Capitol Hill, the Federal Reserve’s Board of Governors is about to get its most controversial and contentious new member in decades.

The U.S. Senate is to vote on a procedural motion Tuesday that would clear the way for a confirmation vote on President ’s Fed nominee, , though her already thin margin of support has gotten even narrower. Republican Senator has entered after exposure to someone who tested positive for Covid-19. If Shelton passes the procedural hurdle, the second vote could come as soon as later on Tuesday.

Shelton, 66, a former informal adviser to Trump, was long known for her advocacy of a return to the gold standard, ultra-hawkish views on inflation and opposition to federal deposit insurance. She provoked and opposition by abandoning those views and calling for interest-rate cuts to align herself with Trump as she emerged as a candidate for a Fed post. 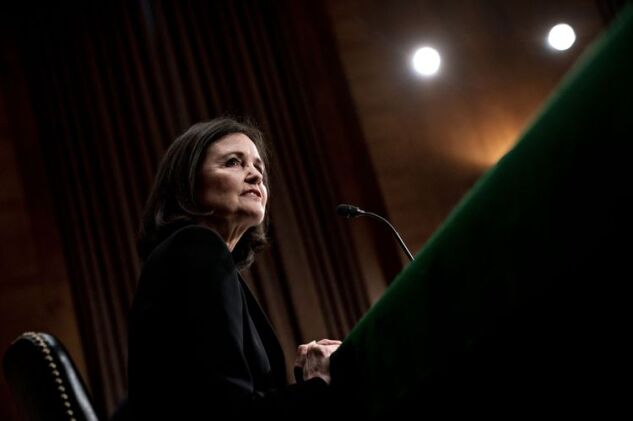 Judy Shelton told Bloomberg Businessweek in 2019, “I would welcome the chance to challenge the status quo at the Fed.”
Photographer: Andrew Harrer/Bloomberg

She has also the relevance of the Fed’s mandate, set by Congress, to pursue maximum employment and price stability.

, the former head of the Council of Economic Advisers under President , recently that Shelton was “the worst Fed pick in my lifetime.”

Amid the outcry it was unclear whether Shelton had enough support among Republican senators to be confirmed. Democrats have said they will unanimously oppose her, meaning four Republican “no” votes could block her path.

Utah’s and of Maine have said they will vote against Shelton. of Tennessee says he opposes her nomination and won’t show up for the vote. But last week Alaska’s , previously undecided, she would back the nominee.

With three GOP senators opposing Shelton and Florida Republican also in quarantine, Republicans could fall short of the votes they need to confirm Shelton if all Democrats and independents are present on Tuesday and vote against her.

Several Democrats missed Monday’s votes, and Vice President-Elect , a senator from California, was planning to be in Delaware with the transition team.

Before it adjourns in December, the Senate might also approve the nomination of , research director at the St. Louis Fed, who was nominated by Trump for a vacancy on the Fed’s Washington-based board. Waller’s nomination is not considered controversial.

If both are confirmed it would bring the Board of Governors to a full complement for the first time since 2013.

It would also mean that Trump had selected five of seven governors at the Fed and elevated a sixth, , to lead the central bank. Powell was initially appointed to the board by Obama in 2012, and Trump made him chair in 2018.

Yet Trump never bent the Fed to his will. All of his previous successful picks could be described as mainstream, and during most of Trump’s term they resisted his calls to lower interest rates as much and as quickly as he wished, despite his frequent .

Shelton is more unpredictable, especially with Trump leaving the scene. “I would welcome the chance to challenge the status quo at the Fed,” she told Bloomberg Businessweek in .

But the power of an individual governor to influence monetary policy is limited, particularity if they are at odds with the leadership. In addition, though governor terms last for 14 years, Shelton has been nominated to fill a term that expires in 2024.

The biggest threat Shelton presented to Fed insiders and to financial markets -- the possibility that Trump might try to make her chair in 2022 when Powell’s term expires -- has evaporated with Trump’s failure to win a second term.

Waller, who has a doctorate in economics, is seen as a highly qualified insider, though one ready to challenge consensus views on the Federal Open Market Committee, the Fed’s rate-setting panel.

He helped develop the argument from St. Louis Fed President that the economy is stuck in a new regime of low interest rates, low growth and low inflation. It’s a stance that raised eyebrows when introduced in June 2016, but has since been embraced by the FOMC.

Waller has been nominated for a term that expires in 2030.

(Updates with details of Grassley’s quarantine in second paragraph.)