European Union finance ministers agreed on a 540 billion-euro ($590 billion) package of measures to combat the economic fallout of the coronavirus pandemic, papering over differences that have thrown into question the EU’s future integrity.

In an emergency teleconference on Thursday, the bloc’s finance chiefs approved a plan to stave off what’s expected to be a recession of unprecedented size. The deal will lay to rest -- at least for now -- concerns that the EU was incapable of uniting behind a common strategy when it was most urgently needed.

In a sign of relief, ministers broke out in applause once the agreement was struck. However, it falls short of what those countries hardest hit by the virus -- Spain and Italy -- had been demanding, and notably omitted any reference to debt sharing. It’s now up to EU leaders who on April 23 will take up the debate and reopen the accord or approve it as it stands.

“The agreement of the Eurogroup is a significant breakthrough,” European Council President said in a statement on Friday. “With this unparalleled package we should shoulder the burden of the crisis together.”

The common response includes a joint employment insurance fund worth 100 billion euros, a European Investment Bank instrument intended to supply 200 billion euros of liquidity to companies, as well as credit lines of as much as 240 billion euros from the European Stability Mechanism -- the euro area’s bailout fund -- to backstop states as they go on a spending spree to help economies back on their feet.

The ministers also agreed to work on a temporary fund that would help kick-start the recovery and support the hardest-hit countries while leaving open how it would be financed. French Finance Minister said the fund could be decided on in the next six months and may total 500 billion euros. 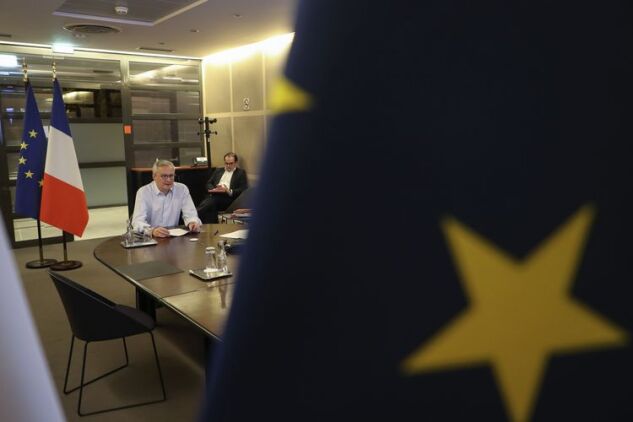 All of it needs approval by government leaders as early as next week, and tensions persist.

Disagreements were laid bare earlier this week when finance ministers failed to agree on a joint response after 16 hours of bitter negotiations.

On Thursday, the meeting was delayed by nearly five hours while key countries including the Netherlands, Italy, France, Germany and Spain negotiated a compromise that would ultimately be uncomfortable to most, yet acceptable to all. Once the meeting started, it took just 30 minutes to declare success.

The agreement on the recovery fund was a victory for countries including France, Spain and Italy, which have been pushing for it to be financed through joint debt issuance. Yet the text skirted the question of common debt and only mentioned “innovative financial instruments” -- a reference that even countries like Germany, that are loath to agree to further risk sharing -- could live with.

“It’s good that there is a deal, but the size of the program is too small,” said , director of the Bruegel think tank in Brussels. Finance ministers accept that the European Central Bank will have to do the heavy lifting, and “as long as there is consensus on that, the outcome is OK,” he said. “The Eurogroup was not ready to create on a large scale European debt.”

Covid-19 has overwhelmed Europe, with the continent suffering more than 65% of the worldwide deaths attributable to the virus. The scale of the damage shines a spotlight on the vulnerabilities of a union whose sense of common purpose has been tested over the past decade by the Greek debt crisis, an influx of refugees and then Brexit.

But the coronavirus outbreak -- in the words of German Chancellor , a veteran of many geopolitical fights -- poses the biggest threat to the EU since World War II. Italian Prime Minister warned this week that countries will have to write off Europe and “everyone will do their own thing” without agreement on shared debt to finance economic recovery.

Italian Finance Minister told his colleaguesthat while he backed the agreement, Conte would raise the issue of joint debt at the next meeting of EU leaders. And he elaborated in an with Rai 1 on Friday that the total recovery package should total around 1.5 trillion euros.

Italy, Spain and France are among about 10 countries pushing for what has been dubbed coronabonds to help share the burden of this crisis. They have run into resistance from fiscally hawkish northern EU countries.

“We are and will remain opposed to #Eurobonds,” Dutch Finance Minister Wopke Hoekstra said on Twitter after the meeting. “We think this concept will not help Europe or the Netherlands in the long-term.”

The accord’s wording on the use of credit lines from the bailout fund left a lot to be desired for all camps. The conditions attached to these funds were the main sticking point earlier this week, with the Netherlands lobbying for a requirement that ensures countries return to fiscal health once the crisis is over.

In the end, the Dutch got a slightly stricter commitment that countries would strengthen their “economic and financial fundamentals” once the crisis was over. Meanwhile, the lines would be able to finance “direct and indirect healthcare, cure and prevention related costs,” a likely narrower scope.

“This package is important for highly-indebted countries, like Italy and Spain, because it creates space to deliver a stronger fiscal response. Easier risk sharing also takes pressure off the European Central Bank, which has had to backstopsovereign borrowing costs and could now face a lower hurdle to provide emergency support.”

While the virus’s reach has been indiscriminately global, most countries have acted alone and in their own interests. Europe’s richer but more-frugal north is pitted against Italy and Spain, the worst-affected countries, in a climate of mistrust and simmering resentment.

As with many an EU deal, everyone claimed a victory and some of the thornier details were left to be ironed out among the leaders.

Some finance chiefs will have trouble selling the deal back home -- especially in Italy, which doesn’t want to be seen as ceding to northern Europe at a time of national crisis when the ESM already is a target for euroskeptic politicians.

Italian opposition leader said he would seek a confidence vote against Gualtieri for agreeing to Thursday’s deal. Accepting a deal involving the bailout fund would be “illegal and senseless,” putting “the savings, the property and the future of Italians at risk,” Salvini said this week.

“We need a win at the European Council,” Gualtieri said on Friday, adding that there would be a “battle” over joint debt at the upcoming meeting of EU leaders. “I am confident that the Italian position will prevail and we are close to pushing the more reluctant countries on the issue of bonds.”

(Updates with timing of summit in the second paragraph, Charles Michel quote in the third.)

To contact the editors responsible for this story:
at bsills@bloomberg.net