The CFPB is expected to reconsider Trump-era guidance that exempted some earned-wage access products from federal lending laws, as states consider their own guardrails for the rapidly growing industry.

Consumer advocates have been pushing for the Consumer Financial Protection Bureau to rescind a November 2020 advisory opinion stating that earned-wage access (EWA) products—money advances on wages—aren’t loans or credit products subject to the Truth in Lending Act if they come without user fees and other characteristics.

The CFPB opinion only addressed a sliver of the industry. But industry lobbyists and some lawmakers in New Jersey nevertheless have been using the opinion to push for legislation that would exempt some products that collect fees directly from consumers from the state’s usury laws.

The bureau has responded, triggering expectations that it’ll likely take a second look at the issue. The CFPB’s acting general counsel, Seth Frotman, sent a letter to consumer advocates in January regarding the New Jersey bill (S3611/A3450), indicating that he wants the bureau to reexamine the 2020 guidance and assess whether EWA products should be treated as credit.

“It’s a foregone conclusion that they’re going to revisit this guidance,” said James Kim, a partner at Ballard Spahr LLP.

The earned-wage access industry comes in essentially two models. In one, firms like PayActiv Inc., DailyPay Inc. and Even Responsible Finance Inc. partner with companies such as McDonald’s Corp. to allow employees to get cash advances before a pay period ends. In the other, financial app providers such as Earnin and Dave market wage advance products directly to consumers.

Lawmakers in states that ban payday lending and have other strong consumer protections are likely to take notice of the CFPB’s potential new stance when considering how to treat pay advance products, said Yasmin Farahi, a senior policy counsel at the Center for Responsible Lending.

“In some ways, those existing state consumer laws, which we think are how they should be regulated, could be viewed by these providers as a threat,” she said.

The market is expected to grow in the coming years. Walmart Inc. in January announced plans to buy EWA provider Even as part of an expansion of the retailer’s financial services app. 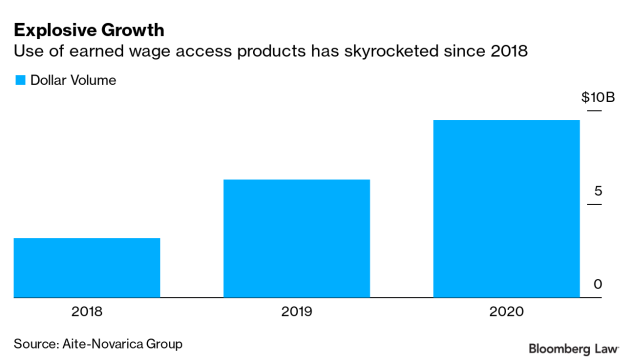 Product offerings can vary widely, making it difficult to determine just how to regulate the product.

The typical employer-backed model allows people to access a portion of their paychecks early and pay the advance back over subsequent pay periods. Companies that provide earned-wage products directly to consumers get paid back by accessing users’ bank accounts.

Fee structures can also vary depending on the provider.

Many employers choose to cover fees when they partner with an EWA provider, while other employer-provider options allow employees to pay voluntary “tips” for pay advances. A few other employer-based products charge user fees.

Consumer advocates say that models where consumers pay fees are the same as credit. High fees can translate to the same high interest rates as payday loans, which can carry annual percentage rates as high as 450%.

An April 2021 report from the Financial Health Network found that the typical fee charged on earned-wage access products was 5% of the advance amount, which is lower than the fees charged on payday loans. Consumers successfully repaid those EWA advances 97% of the time, far higher than the repayment rates on payday loans.

The industry has so far received backing from the CFPB in its contention that many EWA offerings aren’t credit.

“EWA provides extensive benefits to the tens of millions of Americans who use it each year. It is their earned pay, not a loan,” said Brian Tate, president and chief executive officer of the Innovative Payments Association, an industry group that includes several earned wage access firms.

CFPB Director Kathleen Kraninger, a Trump appointee, followed with the the advisory opinion in November 2020. Under the CFPB’s interpretation, no-fee EWA products aren’t offering credit because people are accessing their earned money and pay it back through future earnings without accruing any debt besides the initial amount advanced.

Soon after, the CFPB issued no-action letter to PayActiv, one of the leading companies in the market. The move shielded PayActiv’s no-fee products from potential enforcement actions under the Truth in Lending Act.

New Jersey lawmakers used the 2020 advisory opinion to try to push legislation exempting some employer-based earned-wage access products from the state’s 30% criminal usury cap. The legislation was pulled in December just before the 2021 legislative session expired and didn’t receive a vote.

The CFPB’s advisory opinion “muddied the water” in discussions about the legislation, Brown Ruggia said.

Industry lobbyists claimed that the CFPB’s advisory opinion blessed industry models that carried fees despite the plain language of the letter, she said.

Lawmakers in New Jersey, New York, North Carolina, South Carolina, Georgia, Nevada and Utah introduced legislation to regulate earned wage access in 2021, and they are expected to do so again in upcoming sessions, Farahi said.

The CFPB’s influence could have an impact on state legislative battles, said Catherine Brennan, a partner at Hudson Cook LLP.

That is most likely to be true in states like Georgia, New Jersey, New York and North Carolina, where payday lending is already banned, Farahi said.

California could provide a workable model for some states to follow.

The state Department of Financial Protection and Innovation in January 2021 entered into memoranda of understanding with six of the largest earned wage access companies, including PayActiv and Even.

The memorandum allows the state’s financial watchdog to collect information from earned wage access companies and determine whether industry-specific regulations should be put in place.

Industry representatives pointed to the California agreement as the best way to move forward.

“It is critically important that any public debate focusing on EWA should be careful, thoughtful, and inclusive of all stakeholders,” Tate said.