A bipartisan infrastructure package aims to ramp up IRS surveillance of cryptocurrency transactions. Above, Coinbase signage is displayed in New York during the company's initial public offering in April 2021.
Photographer: Michael Nagle/Bloomberg

A Senate proposal to ramp up IRS surveillance over cryptocurrency transactions has the industry and investors questioning the plan’s viability and its promise of generating $28 billion in tax revenue.

Cryptocurrency exchanges, investors and their advisers were caught off guard Wednesday when a bipartisan Senate infrastructure agreement was released that included a large-scale increase in the requirements for crypto brokers and investors to report their transactions to the . The reason for the last-minute inclusion: the proposal would raise a chunk of money to help fund the $550 billion of investment into transportation and utility upgrades. 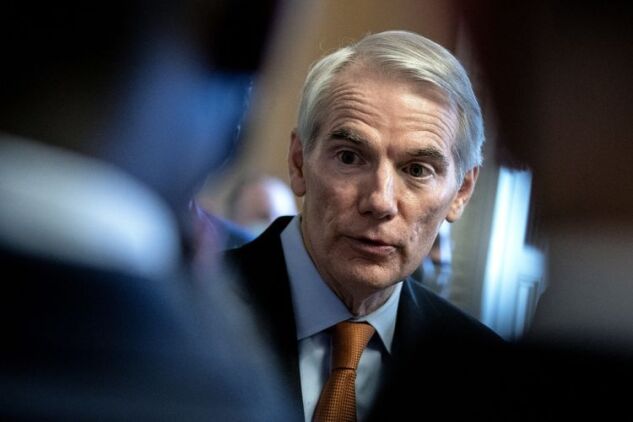 The proposal -- which updates rules requiring brokers to report cryptocurrency transactions and for businesses investing in crypto to disclose trades of more than $10,000 -- was the result of a compromise between the White House and Senator , a lead Republican negotiator. The provision includes portions of a Portman measure, according to a person familiar with the matter. The White House has also proposed similar ideas in recent months.

“Instead of rushing through an untested provision with vast unintended consequences, we encourage Congress to work with industry to find language that works for all stakeholders,” said , who heads the Blockchain Association, a Washington-based trade group.

The plan addresses a key challenge for the federal government: keeping up with the explosion of cryptocurrencies, both in quantity and in value, which allow holders to circumvent the traditional banking system and remain largely anonymous. The market’s value surpassed $2 trillion this year.

IRS Commissioner has said tax evasion from virtual currency is a key contributor to the growing tax gap, the difference between what’s owed and what the agency actually collects. Cryptocurrency use has also been tied to illegal activity, including drug trafficking and money laundering.

Cryptocurrencies have evolved much more quickly than the government has been able to pass laws to regulate it, making a rare shared concern for both Republicans and Democrats, who largely disagree on tax issues.

That made additional tax enforcement in the area mutually agreeable, even after lawmakers decided to cut an earlier proposal in the infrastructure plan for a broader expansion of IRS audits. Republicans deemed that idea too expansive.

At the same time, cryptocurrency investors have been frustrated for years with a lack of rules from the federal government about how to report their holdings for tax purposes. Instead of more clarity in how to follow the rules they’ve faced an uptick in audits and enforcement activity.

“Everybody’s been talking about the appropriate way to provide more reporting in particular and that leads to better compliance,” Portman told reporters Wednesday after the deal was announced.

The cryptocurrency industry, however, raised questions about whether the $28 billion revenue estimate -- from Congress’s official tax scorekeeper, the Joint Committee on Taxation -- was accurate.

Some crypto industry lobbyists called versions of the draft bill text unworkable and potentially detrimental to the industry’s growth in the U.S. They said collecting comprehensive information will be difficult if not impossible.

The senators writing the bill have yet to release a final draft of the legislation.

It’s a longstanding tradition for industries to complain about more regulations and oversight, but Congress also has a history of rushing unfinished tax ideas into legislation when it needs the revenue from the proposal to offset other spending in a given bill.

In 2015, Congress passed a new audit process for partnerships and limited liability companies because it would raise tax revenue to pay for a budget deal, even though the lawmaker developing the idea said it still had technical problems.

“This is a very complicated space, easy to get wrong, and this is why we need a real committee process to consider these issues, instead of secret drafting. We’re working on making it better,” Senator , a Wyoming Republican who owns bitcoin, said.

Some firms in the crypto industry said it’s unclear whether they even have the ability to comply with the proposal and that if implemented, it could push part of the industry overseas.

Enforcing the new reporting requirements for cryptocurrency is going to be extremely difficult, said Shehan Chandrasekera, head of tax strategy for CoinTracker, a company that helps people manage and calculate taxes from their cryptocurrency transactions.

Lawmakers are trying to take what worked for stocks and securities and apply those practices directly to cryptocurrency, he said. “I don’t think it’s going to work out because in the crypto world, there’s so much self-custody -- a lot of people are holding their assets in a hardware wallet -- and in the stocks and securities world that never happens.”

A hardware wallet is a physical device on which people store the private keys for accessing their digital assets.

It will also be tough to enforce reporting on decentralized exchanges, Chandrasekera said. Many don’t collect Social Security numbers, names, or addresses of users.

(Updates with Lummis quote in the 17th paragraph)