Debt collection lawsuits have in recent years come to dominate court dockets around the country, but the pandemic-related shutdowns of state court systems could lead to a huge spike in cases in the coming months.

Couple that with an increase in the number of people who are falling behind on payments for medical bills, credit cards, and other debts, and a dire scenario develops, says Karen Andres, a director at the Aspen Institute’s Financial Security Program.

“We fear that this could just destroy people in a time where we really can’t afford to have more people suffering in this kind of way as we head into winter,” she said.

The combination of enhanced unemployment benefits, $1,200 stimulus checks, forbearance from creditors, and just a lack of things to spend money on actually led many Americans in the early months of the pandemic to pay down some of the massive debt hanging over them, according to a study from the Federal Reserve Bank of New York.

But that was then. With stimulus checks having mostly run out, and talks over a new package in Congress to help those who are out of work having stalled, economists are expecting debt levels to rise again.

Despite the slight decline in the amount of outstanding consumer debt, Americans’ debt load is staggering.

The total amount of U.S. household debt, including mortgage, credit card, student loan, and other payments, stood at $14.27 trillion for the period March through June of 2020, according to a study by the Federal Reserve Bank of New York.

According to the Pew Charitable Trusts, the number of debt lawsuits filed annually nationwide nearly doubled from 1993 through 2013, jumping from nearly 1.7 million to around 4 million per year.

Texas is alone among the states to provide data on all debt collection cases filed in its courts, and Pew found that debt claims doubled to around 30% of the docket between 2014 and 2018.

“We know that even before the pandemic, debt collection lawsuits were the most common type of civil litigation across the country,” said Erika Rickard, the project director at Pew’s Civil Legal System Modernization project.

Texas Chief Justice Nathan Hecht said that courts in his state have so far only tried 16 cases to verdict over the course of 2020. In 2019, the state’s courts tried around 9,000 cases to verdict.

In an online event hosted by Pew, Hecht said that “cases are building up” and that includes those aimed at debt collection. Hecht serves as the president of the Conference of Chief Justices and has been leading state court efforts around the country to respond to the pandemic.

Full data from across the country for the first half of 2020 isn’t yet available, but a review of available state court dockets by Bloomberg Law found that Midland Funding—one of the country’s largest debt collectors—filed about 3,500 cases in January 2020. That fell to about 500 in May as courts were shutting down, but rebounded to about 2,000 in September as courthouses reopened, the data show.

Those numbers are expected to rise. 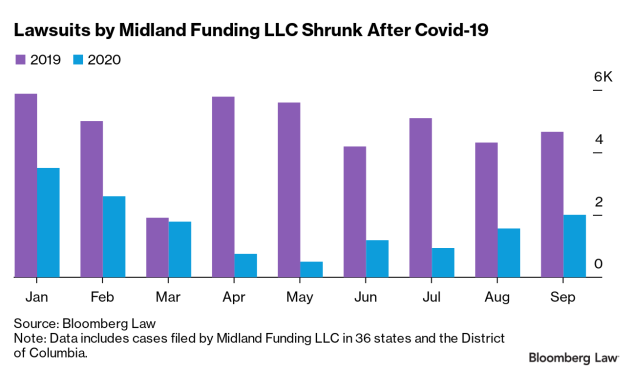 Encore Capital Group Inc., Midland’s parent company, said in a statement that its caseload fell as the pandemic set in and that it is “following the rules of each court system faithfully as their restrictions begin to lift.”

People in dire economic circumstances are focusing their limited resources on paying their rents and mortgages and car payments, and that means that other debts may be going unpaid, said Katherine Speed Miller, executive director of the Texas Legal Services Center.

“People are reacting to what the immediate need is,” Speed Miller said.

Black, Latino, and other marginalized populations that were already struggling economically are likely to see the brunt of the new litigation, because they are among those suffering the most from the health and economic crisis the pandemic has brought on, she added. 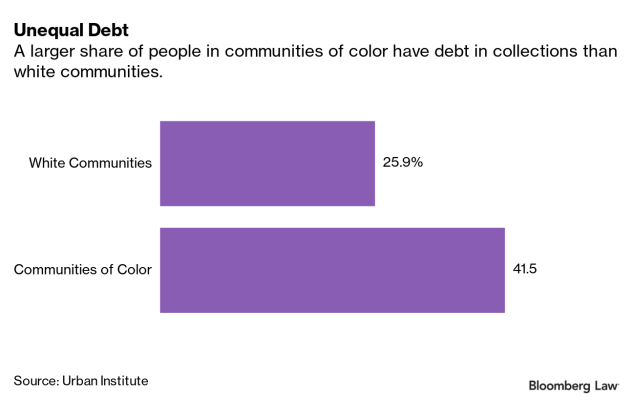 Nationally, 41.5 percent of communities of color hold debt that is “in collections,” meaning it is past due enough to be turned over to a debt collection firm, according to data from the Urban Institute. By comparison, only 25.9 percent of white communities have debt in collections, a 15.7 percentage point difference.

There also exists a disparity when it comes to medical debt. Sixteen percent of Americans have medical debt in collections, but that rate jumps to 19.4% for people living in communities of color, according to the data.

Communities of color also tend to have higher rates of people without health insurance, with 15.4% of those communities lacking coverage versus 7.1% of people in primarily white communities.

In Texas, 9% of whites, 12% of Blacks, and 15% of Latinos don’t have health insurance, exposing them to higher medical costs during a pandemic, according to the Urban Institute.

“It is tragic that it’s happening to anybody, but particularly to those communities that were just holding their heads above water,” Speed Miller said.

Debt collectors generally litigate as a last resort, experts say, as it makes more economic sense to avoid expensive legal fees and settle out of court. But if cases do go to court, those who owe in the vast majority of cases end up losing.

More than 70% of cases end in default judgment, meaning that a defendant hasn’t shown up for court, according to the Pew study. In many instances, people don’t know they’ve been sued for a debt until their wages have been garnished.

Those people who do make it into court usually do so without the help of an attorney, creating a significant power imbalance, Andres said.

Debtors also encounter court fees that could put them further in the hole when they respond to collection lawsuits, she added.

State courts and legislatures should look to find ways to help people who have run into debt problems, Hecht, a Republican said.

“A lot of times, issues like this are viewed like entitlements or some kind of social program. But we’re talking about very conservative values here as well,” he said.