A gavel rests on a desk.
Paul Taggart/Bloomberg via Getty Images

New data tools and strong relationships between top CFTC and Justice Department enforcers are yielding record enforcement numbers and a model of collaboration that both agencies see as the way of the future.

Along the way, the Commodity Futures Trading Commission has adopted Justice-style enforcement and case building techniques and the Justice Department has honed its ability to pursue manipulation in markets long policed by the derivatives regulator.

“I think our collective goal here is to try to have as many different avenues of information or leads about suspicious misconduct open to each of us,” CFTC Enforcement Director James McDonald told Bloomberg Law in a recent interview.

Fraud and market manipulation cases are increasingly being brought in parallel, delivering a one-two punch for market actors who now must worry not only about reputational risk from possible civil action and penalties, but also possible jail time.

In fiscal 2018, the CFTC brought 14 civil enforcement actions in parallel with the Justice Department, more than the number of parallel cases it brought in the preceding five years combined. The final tally is expected to be even higher in fiscal 2019, McDonald said.

Casework is often driven by referrals, as well as both agencies deploying their own data analysis tools to sift through reams of trading data to detect suspicious activity.

Spoofing, an illegal algorithmic trading practice intended to shift market prices up or down in a trader’s favor, has become a prime target for their parallel enforcement.

Since 2018, both agencies have opened record numbers of spoofing-related cases. “Last year we filed more spoofing cases, more cases involving manipulative or deceptive conduct, than ever before,” McDonald said.

Justice, in turn, has made a point of pairing its own data analysis efforts with the CFTC’s institutional knowledge of commodities markets, and pushing for more robust criminal commodities fraud enforcement.

The agency charged more than a dozen individuals in 2018 with spoofing activities, and has stacked up more cases in parallel with the CFTC in 2019. The 2018 charges stem from an initiative begun by a unit of Justice’s Fraud Section—located within the Criminal Division—to focus on spoofing in commodities futures markets, an effort that has spilled over into this year.

“It’s my personal view that criminal commodities fraud enforcement over the last 20-30 years has not been as robust as it probably should have been” on the Fraud Section’s end, said Robert Zink, the section’s chief. It’s now a priority, “and we will devote resources to pursue these cases, which we think are very important.”

Both the CFTC and Justice—each quick to applaud the assistance given by the other— have indicated that they’ll continue to emphasize their parallel work. 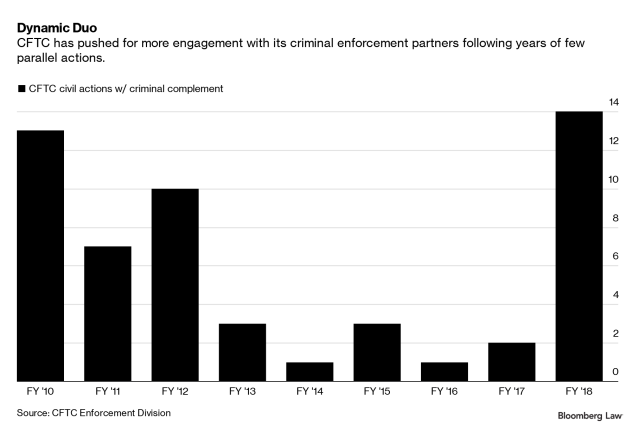 For the CFTC, a relatively small financial regulator with approximately 160 enforcement staff, the investment in robust data analytics is a potential equalizer for keeping up with the volume of trades occurring in fractions of a second.

It has also helped raise the profile of commodities fraud cases within the agency, according to Zink.

“I think it is no secret to criminal defendants, their counsel, and the market generally, the way that we’re going to make these cases. It will be based on data,” Zink said.

Under McDonald, the CFTC has made other adjustments to fine tune its enforcement capabilities. That included bringing the agency’s markets surveillance team into the Enforcement Division from the Division of Market Oversight.

“Bringing them into Enforcement I think further strengthened our ability to police these markets, to conduct surveillance and to really understand the trading activity that was happening,” McDonald said.

The close relationship between the Fraud Section and the CFTC, as well as their newly sharpened data analytics tools, may give real pause to companies operating in derivatives and commodities markets that want to be seen as trusted market players, said Anne Termine, who leads Covington & Burling LLP’s futures and derivatives practice group and is a former CFTC chief trial attorney.

“Maybe people will think twice if you have an action against you for spoofing. Throw on top of that the risk of criminal action and having the DOJ investigating you for some time, that’s a significant penalty,” Termine said.

One of the most prominent of the recent parallel actions involved rarely-used criminal conspiracy charges under the Racketeering-Influenced Corrupt Organizations (RICO) Act.

The CFTC aided the DOJ’s case—and brought its own—against three current and former traders on J.P. Morgan’s precious metals desk. They’re facing RICO charges, which federal prosecutors used in the 1990s to convict several soybean traders but has seldom been seen in markets-related cases since.

The use of RICO in a spoofing indictment “sends a very powerful message,” said Sarah Hall, a partner at Thompson Hine LLP who spent seven years in the Fraud Section prosecuting corporate and financial crime. “It’s a real groundbreaking move” that flips the script on how prosecutors have typically targeted spoofing allegations.

The government alleged the J.P. Morgan precious metals desk was the criminal enterprise under RICO, turning the traders’ employer, which would normally be the target of an enforcement action, into the victim.

It’s a sign that the Fraud Section, which has begun finding its groove when handling data-heavy manipulation cases, is open to experimenting with methods of criminally prosecuting spoofing, Hall said.

“DOJ is still trying to figure out the best way to present these cases to a jury,” she added. “Jurors will effectively grasp RICO conspiracies a lot better than they’ll grasp what the heck price manipulation is, which is sort of at the heart of spoofing.”

That’s where the CFTC’s knowledge of derivatives markets and the Commodity Exchange Act is likely to become paramount.

“Derivatives markets are bespoke markets and the CFTC as an expert agency is, and is supposed to be, a repository of expertise,” said Aitan Goelman, former CFTC enforcement director and now partner at Zuckerman Spaeder LLP in Washington.

The CFTC may bring some novel legal theories of its own to bear in pursuit of market manipulation or fraud abroad.

In March, McDonald said the commission was investigating foreign corruption and bribes that may result in violations of the Commodity Exchange Act.

Those cases are likely to be conducted in conjunction with the Justice Department, McDonald said. The open investigations “began through conversations with our enforcement partners about factual scenarios known to them, to which we at the CFTC might be able to add our expertise about how those facts would affect American derivatives markets,” McDonald said in March.

The announcement took practitioners in the Foreign Corrupt Practice Act defense bar by surprise, leaving many curious to see how the CFTC would bring civil charges that seem to borrow heavily from principles traditionally under the Justice’s domain. The agency has yet to bring its first case.

In bringing his experience as a prosecutor in the U.S. Attorney’s Office for the Southern District of New York, McDonald is building on the foundation laid by his two predecessors, Goelman and David Meister. They also hailed from the S.D.N.Y. before being tapped to lead the CFTC’s enforcement group.

Under McDonald, the CFTC-DOJ partnership appears as close-knit as ever, and it’s not confined to the agencies’ leadership.

“There are relationships all the way down the line—at the supervisor level, at the line attorney level and the agent level,” said Ben Singer, partner at O’Melveny & Myers LLP.

The Justice Department has secured several guilty pleas and commitments to cooperate during its current spoofing crackdown, which began in 2014. It’s a sign of strong case building, former prosecutors say, given the sophisticated counsel typically representing these defendants.

But Justice has also run into trouble where the CFTC hasn’t, underscoring the differences in burden of proof required for criminal and civil actions.

Since the first federal spoofing trial ended in a 2015 guilty verdict against New Jersey high frequency trader Michael Coscia, prosecutors have had difficulty securing convictions when these cases are put before a jury. This issue is often attributed to the complicated, data-heavy nature of the allegations.

Last year, a federal jury found Andre Flotron, a former precious metals trader at UBS Group AG, not guilty of scheming to engage in spoofing on futures contracts. And in April, a spoofing case against a software developer accused of conspiring with the trader behind the so-called flash crash of 2010 ended in a mistrial after the jury failed to reach a verdict.

Federal prosecutors won’t be deterred by those setbacks, according to Singer, also a former chief of the securities and financial fraud unit within the Fraud Section.

“They’re probably going to keep trying these cases,” he said. “And, based on some of the evidence they are getting, in terms of cooperators pleading guilty, I think they’re going to have more success in the future.”