The Afterpay application login page is shown on a smartphone.
Photographer: Brent Lewin/Bloomberg via Getty Images

As more Americans are expected to purchase gifts through buy now, pay later services this holiday season, the nation’s consumer finance watchdog can turn to tools in existing law to soften the edges of the largely unsupervised industry.

The burgeoning businesses are “regulated at a federal and state level, so they have regulations to abide by,” said Rachel Gittleman, the financial services manager of the Consumer Federation of America. But she added, “I would expect that there would be more guardrails there, and more oversight.”

Rohit Chopra, the CFPB’s new director, has promised aggressive enforcement of federal consumer finance laws and could use existing powers to police the market, even though federal regulators have had a largely hands-off approach to the industry.

Buy now, pay later has been a big part of the consumer spending landscape in Australia, the U.K., and parts of Europe for years, but started picking up steam in the U.S. in 2020 as people stuck at home shopped online during the pandemic.

Consumers worldwide spent $500 billion through the products in 2020, a 28% jump from the previous year, according to an October report from Aite-Novarica Group. That is expected to jump to $1.2 trillion by the end of 2024, although Aite-Novarica said growth could be even higher as even more U.S. consumers use the products.

“This is not new, and it’s not going to go away,” said Ginger Schmeltzer, a strategic adviser at Aite-Novarica and co-author of the report.

The most popular model is pay-in-four, where a purchase can be divided into four even payments across six weeks. And giant retailers, banks, and payments firms are all getting in on the act.

Amazon Inc. agreed to allow customers to use Affirm at checkout in a major expansion of buy now, pay later services in August, joining Walmart Inc. and Target Inc.

Many buy now, pay later companies, like Affirm and Afterpay, host their own online marketplaces where consumers can buy directly from companies like Adidas and Gap Inc.

Companies from PayPal Holdings Inc. to Apple Inc. to Chase Bank N.A. have all entered the buy now, pay later market or announced plans to do so in recent years. In August, payments processor Square Inc. announced a $29 billion acquisition of Afterpay.

The companies market themselves as safe alternatives to credit cards. Users know how much they’re going to pay every few weeks and don’t have to deal with interest payments if they’re late.

“On the surface, there’s nothing wrong with it,” said Colleen McCreary, Credit Karma’s consumer financial advocate. “It’s a great financial tool to have in the toolkit.” 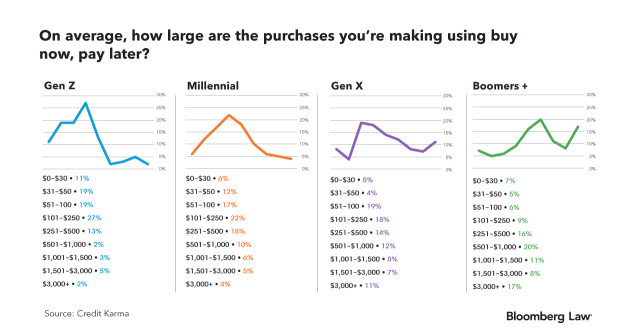 “BNPL companies make most their money through partnerships with retailers, not consumer fees,” said Penny Lee, CEO of the Financial Technology Association, which includes Afterpay and Clarna as members. “Less than 15% of revenue is derived from consumer late fees.”

“Their model is based on frequency, based on customer satisfaction,” Lee said.

Complaints about companies in the field have been almost nonexistent.

Consumers filed 426 complaints against Affirm, Afterpay, Klarna, and Sezzle on the CFPB’s consumer complaint database between Jan. 1, 2019, and Nov. 10, 2021. The CFPB received a total of 1.1 million complaints against financial companies during that period.

But some problems are emerging. Credit Karma found that 34% of users have fallen behind on payments.

Klarna and Afterpay are facing class actions alleging that they didn’t warn consumers about potential overdraft fees, typically $35 each time a creditor tries to withdraw from a consumer’s bank account.

“They’re partnering with this younger generation that’s already beleaguered and in debt,” said Gittleman of the Consumer Federation of America. “Is this the best opportunity for people?”

The federal Truth in Lending Act doesn’t apply to many services because it only covers credit products that involve at least five payments, more than the popular pay-in-four model.

Customers also are responsible for keeping track of when outstanding payments are due. And while missed payments can hurt a consumer’s credit rating, on-time payments won’t help it.

Major credit bureaus can’t model for short-term payments like those in they pay-in-four model, Lee said.

Consumer advocates and Democratic lawmakers, including House Financial Services Committee Chairman Maxine Waters (D-Calif.), are urging the CFPB to look at these issues.

“This all reinforces the need for the Consumer Financial Protection Bureau to use its authority to identify and address the risks they pose to consumers,” Marisabel Torres of the Center for Responsible Lending said at the hearing.

Chopra has promised vigorous enforcement of consumer finance laws, and could move to bring the largest buy now, pay later firms under CFPB supervision using a so-called “larger participant"rule. But the agency has a stacked agenda, so squeezing buy now, pay later into new rulemaking may be difficult.

“There just seems to be some signaling there that maybe a big rulemaking isn’t coming,” said Bryan Schneider, the former head of the CFPB’s Supervision, Enforcement and Fair Lending Division.

The CFPB already can bring cases against buy now pay later firms under the Equal Credit Opportunity Act, a key fair lending law, as well as the Electronic Funds Transfer Act and other federal consumer finance laws. The bureau also has broad authority to bring enforcement actions against unfair, deceptive, and abusive acts and practices (UDAAP) by the industry.

The Federal Trade Commission also has authority over buy now, pay later firms, although its powers are far more limited.

The two regulators could target deceptive advertising practices, including about how companies say the service will affect consumers’ credit, Schneider said.

“Are you telling people this will help you build your credit, and then not reporting it to the credit ratings agencies?” he said.

The CFPB could also use guidance and other tools to make fee disclosures and other items more standardized.

Buy now, pay later firms also could be covered be caught up in by the CFPB’s pending payday lending rule, which requires lenders to get permission to access a consumer’s bank account in order to collect payments.

Buy now, pay later firms stress their products are nothing like the high-interest-rate credit issued by payday and vehicle title lenders. But the CFPB rule covers all short-term installment loans with a 45 day repayment terms. The pay-in-four model typically allows consumers to repay over a six-week period but without any interest costs.

Katherine Adkins, Affirm’s chief legal officer, said it’s “possible” that the payday rule, which is currently subject to litigation by payday lenders, could apply to the company.

Companies in the sector should make sure their systems comply with the rule, just in case, Schneider said.

While it’s unclear what the CFPB’s plans are for the buy now, pay later sector, the bureau has been speaking with the industry.

“Afterpay works closely with CFPB on expanding their understanding of the needs of consumers in this rapidly growing customer base,” Damian Kassabgi, Afterpay’s executive vice president of public policy, said.

States also have power to regulate buy now, pay later companies, and several require them to register as lenders in order to operate. That means state fair lending and other laws can come into play.

To contact the editors responsible for this story: at ghenderson@bloombergindustry.com; at mferullo@bloomberglaw.com