As companies around the world beg for loans to weather the pandemic, emboldened banks are offering a fix: Ease up on the regulations.

In Europe, banks are seeking on the way they measure trading risks. In the U.S., they’re lobbying for laxer limits on leverage and less onerous against money laundering. In both cases, firms are promising it will lead to more lending and support for frail economies.

Regulators have already indulged requests for relief from capital and liquidity requirements, and granted more flexibility in accounting for souring loans. While such moves are supposed to be short-term solutions, skeptics say they won’t be surprised if there’s a push to make some of them permanent, undermining the longer-term safety and soundness of the financial system.

“The big banks are politically as strong as ever, if not stronger,” said , a former chairman of the U.S. Federal Deposit Insurance Corp. “If the current administration continues, a lot of these temporary measures will probably become permanent.”

Though typically done behind closed doors, some of the lobbying has emerged publicly, adding to pressure on regulators. kicked off this week by announcing it had exhausted its capacity to accept applications from small businesses seeking to tap a federal rescue program, arguing that a 2018 ban on its growth was constraining its ability to lend. On Wednesday, the Federal Reserve a partial lifting of the ban, exempting any loans made under the program.

The Association for Financial Markets in Europe, a lobbying group representing major banks in the region, said it’s reached out to the European Central Bank and the European Banking Authority on the issue of relaxing trading-risk calculations. 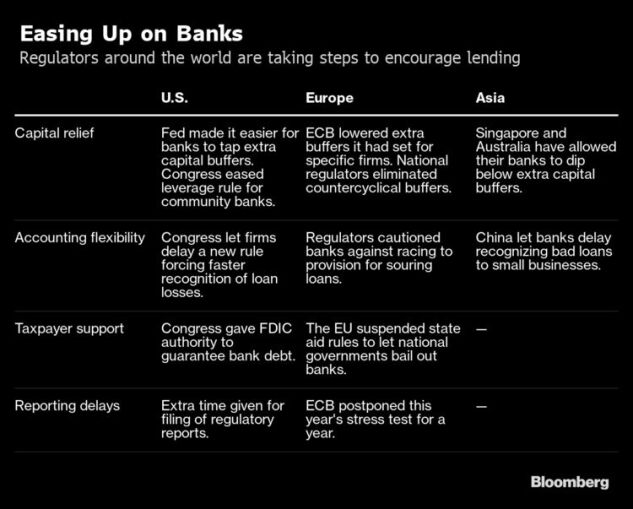 Some of the temporary changes sought by banks -- such as letting them delay the recognition of soured loans -- would hide problems at weak lenders from the public longer, according to of the Brussels-based research group Bruegel. The risk is that hidden losses will only fester, ultimately forcing governments to prop up those firms.

“The more the banks become black boxes during this unusual time, the bigger the danger of some becoming zombies,” said Veron, who’s a senior fellow at Bruegel. “If it becomes too opaque, it will be helping the bankers instead of helping the banking system. And the public has no interest in helping the bankers.”

Congress has given U.S. banks the option to delay implementing a new accounting rule that would require them to recognize faster. European regulators have provided flexibility in determining what constitutes a bad loan, especially if there are government guarantees involved. China has allowed its banks to delay recognizing bad loans from smaller businesses reeling from the deadly coronavirus outbreak, giving a temporary reprieve to hundreds of billions of dollars in debt.

One common misconception about bank capital rules imposed after the 2008 crisis is that they were designed just to ensure lenders could survive a crisis. In fact, banks have also been forced to build up extra buffers, giving them lending that could be unleashed during an economic downturn.

In Europe, the U.S. and parts of Asia, banks have been allowed to dip into some of those capital buffers. But when the pandemic is over and the global economy recovers, lenders will probably fight back against rebuilding them, Veron said.

Bair said companies will probably argue for making some of the changes permanent, and could prevail even under a Democratic-led U.S. administration.

“Wall Street capture has been a bipartisan problem,” she said.

While the ECB and the Bank of England have pushed the biggest banks in the region to suspend all distributions to shareholders, U.S. regulators have been more lenient, giving them room to continue paying dividends after they announced voluntary suspensions of share buybacks. In Switzerland, pressure by industry supervisors has won only partial success, with top lenders agreeing to hold off on half their shareholder distributions for now.

U.S. banks are also lobbying for a relaxation of leverage rules that don’t take riskiness of assets into account. The Fed agreed, but two other regulators have balked. Giving Treasuries and reserves held at the Fed favorable treatment in the calculation of the requirement would create incentives to buy government bonds and park money at the central bank, at the expense of private-sector lending, Bair said.

“Banks keep bragging they’re so liquid and well-capitalized and profitable, but they’re also asking for all these changes,” said Mayra Rodriguez Valladares, managing principal at New York-based MRV Associates, which trains bank examiners and finance executives. “There’s no guarantee,” she said, that easing up on the regulatory burden will mean a flood of new lending.

To contact the reporter on this story:
in New York at yonaran@bloomberg.net