A trio of appeals court judges have emerged as front-runners as President prepares to nominate his third justice to the Supreme Court: , , and , according to people familiar with the process.

The White House is preparing to press forward with a hotly contested nomination battle to replace Justice , and Trump is weighing his options with a view to November’s vote by considering candidates whose backgrounds and judicial credentials he thinks will bolster his chances of re-election.

Barrett was initially seen as the most likely pick but by Saturday the stock of Lagoa, a Cuban-American from Florida, was rising in the White House, said people familiar with the fast-moving process. Thapar, who now hails from Senator Majority Leader ’s state of Kentucky, rounds out the shortlist.

The three have something in common: They’re young, with the prospect of serving on the top U.S. court for decades.

All three judges appeared on a list of potential high-court nominees that Trump updated earlier this month, and Barrett and Thapar were among the nominees whom Trump considered before selecting for the court in 2018.

During a phone call on Friday night with Trump, McConnell didn’t express a preference for any candidate, and said he could deliver a floor vote, people briefed on the conversation said.

A Catholic mother of seven, Barrett, 48, serves on the Seventh Circuit and is the favorite of social conservatives. After Kavanaugh’s bitter 2018 confirmation battle, White House aides, including former White House counsel , told disappointed Barrett allies that she was being saved for the next round of nomination prospects, two people familiar with the matter said.

“If the president is of a mind to replace Justice Ginsburg with a woman, then somebody who would be at or near the top of the list would be Judge Amy Coney Barrett,” said John Malcolm, a legal expert at the conservative Heritage Foundation whose list of possible Supreme Court justices was largely adopted by then-candidate Trump in 2016. “She’s certainly a favorite among social conservatives and also had expressed a great deal of skepticism about the administrative state.”

But Lagoa, 52, a judge on the Eleventh Circuit, has emerged as an appealing prospect since the news of Ginsburg’s death, according to three people familiar with the White House’s deliberations. Trump believes that nominating Lagoa could boost his re-election chances, and that Republican senators like of Utah and of Maine would be less likely to oppose her, given that she received 80 votes during her confirmation to the Senate in 2019. 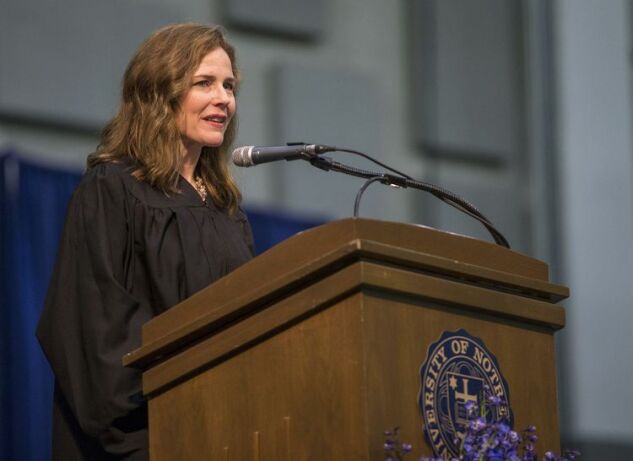 At the moment, Thapar is the third most likely nominee, according to two of the people familiar with the White House’s thinking. He’s close with McConnell, and Trump views him as a potential political asset because he was born in Michigan and grew up in Ohio, according to one of the people.

Thapar, 51, is also known to perform well in TV interviews and has navigated the Senate confirmation process three times before -- first as a US attorney in Kentucky, then as a district judge, and then as an appeals judge on the Sixth Circuit.

“I’m my own judge, and I hope my track record speaks to that,” he said at his appeals-court confirmation hearing in 2017.

Whoever Trump puts forward, a contentious Senate battle is certain. The election is less than seven weeks away and Democrats remain furious about McConnell’s refusal to consider President ’s nominee, , in 2016.

Barrett was confirmed as a judge on the U.S. Court of Appeals for the Seventh Circuit in October 2017. She’s on the faculty of the University of Notre Dame’s law school, from which she graduated. She weathered a tough confirmation process after Trump appointed her to the Seventh Circuit in 2017. “She showed great grace under fire when her bona fides were challenged,” Malcolm said.

Barrett is a former clerk to Justice , whose death in 2016 set off the chain of events that led to Garland’s nomination being left in limbo. Her connection to the conservative jurist appealed to Trump when he was considering nominees to replace Justice in 2018, according to a person familiar with the matter.

The president once confided that he planned to nominate Barrett to replace Ginsburg, a person familiar with the matter said. “I’m saving her for Ginsburg,” Trump told confidants, according to an Axios report in March 2019.

Barrett opposes abortion, a key test for several Republican senators, but said in a 2013 speech at Notre Dame that it was “very unlikely” the Supreme Court would ever overturn Roe v. Wade, the 1973 ruling that established a legal right to an abortion in the U.S.

“The fundamental element, that the woman has a right to choose abortion, will probably stand,” she said, according to an account of her remarks in the student newspaper. “The controversy right now is about funding. It’s a question of whether abortions will be publicly or privately funded.”

During her confirmation hearing in 2017, Democrats argued that her Catholic faith would sway her legal analysis, especially on issues like abortion. “Dogma lives loudly within you,” Senator , a California Democrat, said in a widely reported exchange that enraged conservative groups.

Barrett insisted that her religious views would not shape her decisions as a judge.

Lagoa had an easier time during her confirmation process, advancing on an 80-15 vote. Like Ginsburg she’s a graduate of Columbia Law School. Lagoa was the first Cuban-American woman to serve on Florida’s Supreme Court.

The son of Indian immigrants, Thapar was born in Michigan and grew in Ohio, eventually attending U.C. Berkeley School of Law. The White House considered him as a possible replacement for both Scalia and Kennedy when those vacancies came up.