Like millions of people around the world, Zhang Chunzi borrowed money she thought she’d be able to repay before the coronavirus changed everything.

Now laid off from her job at an apparel exporter in Hangzhou -- one of China’s most prosperous cities -- the 23-year-old is missing payments on 12,000 yuan ($1,700) of debt from her credit card and an online lending platform operated by ’s Ant Financial. “I’m late on all the bills and there’s no way I can pay my debt in full,” Zhang said.

Her story is playing out in similar ways across China, where the virus outbreak has been taking lives and ravaging the economy for more than three months. As Covid-19 works its way through the rest of Asia, Europe and the Americas -- forcing countries into lockdown, driving up unemployment and pummeling small-business owners -- analysts say it’s only a matter of time before defaults start spreading within the record $47 trillion pile of household debt globally.

The early indicators from China aren’t pretty. Overdue credit-card debt swelled last month by about 50% from a year earlier, according to executives at two banks who asked not to be named discussing internal figures. Qudian Inc., a Beijing-based online lender, said its delinquency ratio jumped to 20% in February from 13% at the end of last year. , one of the country’s biggest providers of consumer credit, said this month that it “pressed the pause button” on its credit-card business after a “significant” increase in past-due loans. An estimated 8 million people in China their jobs in February.

“These issues in China are a preview of what we should expect throughout the world,” said , a research fellow at the Peterson Institute for International Economics in Washington. 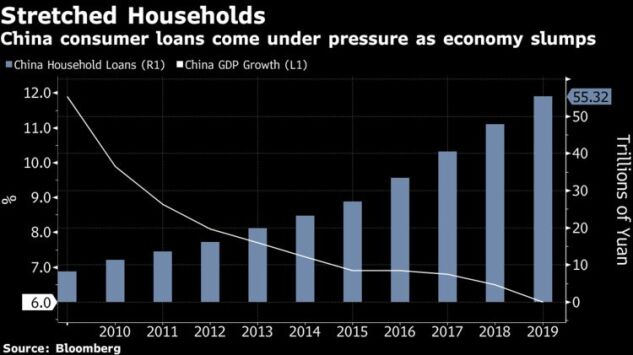 While the extent of the squeeze on consumers and their lenders will depend on the effectiveness of government efforts to contain the virus and shore up economies, the scope for pain is immense.

Households around the world now have $12 trillion more debt than they did during the run-up to the 2008 financial crisis, the Institute of International Finance said in a report this month. Household debt-to-GDP ratios in countries including France, Switzerland, New Zealand and Nigeria have never been higher.

In Australia, which has the highest household debt levels among G20 nations, the country’s largest lender said on Thursday that its financial assistance lines are receiving eight times the normal call volume. A similar surge in queries has flooded lenders in the U.S., where credit-card balances swelled to an unprecedented $930 billion last year and 3.28 million people filed for benefits during the week ended March 21 -- quadruple the previous record.

A recent International Labour Organization report estimated global job losses of almost 25 million, with income losses of as much as $3.4 trillion. And those numbers may underestimate the magnitude of the virus impact, the ILO said.

Few places have seen a bigger jump in consumer borrowing in recent years than China, where household debt including mortgages soared to a record 55 trillion yuan in 2019.

That figure has nearly doubled since 2015, thanks to a housing boom and the rise of online lenders like Ant Financial. While the firm’s risk models rely on reams of payments data, they’ve yet to be tested by a major economic downturn. Many consumers who take out these short-term, high-interest loans -- typically funded by banks through Ant’s Alipay smartphone app -- have minimal income and virtually no credit history.

“Since 2015, banks have kept lowering their criteria to compete,” said , an analyst at China International Capital Corp. “The virus outbreak accelerated their exposure to risks. It will only get worse if unemployment climbs further.”

Consumer default rates at some banks have already increased to as high as 4% from about 1% before the outbreak, according to Zhao Jian, head of Atlantis Financial Research, who cited a survey of lenders. An executive at one major Chinese bank said his firm is taking steps to tighten credit card loans or even drop some clients after seeing a rapid increase in overdue payments.

With corporate delinquencies rising as well, Chinese banks could face a 5.2 trillion yuan surge in total nonperforming loans and an unprecedented 39% slump in profits this year, according to a worst-case scenario outlined by UBS Group AG analysts this month.

Massive government stimulus will help ease the blow. Most countries have announced plans for economic support measures in recent months, including a $2 trillion package in the U.S. that will provide direct payments to lower- and middle-income Americans. Some of the biggest U.S. lenders have to offer grace periods for mortgage borrowers affected by the crisis.

In China, authorities have flooded the financial system with liquidity and encouraged banks to step up their lending to small businesses that employ about 80% of the nation’s workforce.

While most banks have yet to offer debt relief to consumers outside those living in cities like Wuhan that were hit especially hard by the virus, UBS predicts China’s government will do more if needed to help people find jobs and pay their bills. Bloomberg Economics estimates that about 85% of the economy was back online in the week ending March 20, excluding the original virus epicenter in Hubei province.

“A large scale increase in unemployment, and resulting high delinquencies on retail loans won’t be tolerated by authorities as social stability is their bottom line,” said May Yan, a Hong Kong-based analyst at UBS.

Yet stimulus is unlikely to tide over everyone, particularly in places like China where household finances are stretched like never before. The country’s consumer debt-to-income ratio surged to 92% at the end of 2018 from 30% a decade ago, surpassing Germany and closing in on levels in the U.S. and Japan, according to IIF. The risk is that a prolonged economic slump and weak real estate market will force more people to renege on their loans.

That moment has already arrived for Yin Weijun, a 27-year-old who recently lost his job as a hotel chef in Wenzhou, a city in China’s southeast.

“I’m like a refugee from debt,” he said. “I had never missed a payment in my life, but the virus left me with no choice. Even if they give me an extra one or two months, I still can’t pay.”

(Updates with estimate on global job losses in the ninth paragraph.)

To contact the editors responsible for this story:
at czachariahs2@bloomberg.net