Millions of Americans getting breaks on their loans are about to hear from their banks.

Nationwide, lenders are preparing to take a closer look at consumers who have arranged to delay payments, potentially pushing some out of the programs, as the industry tries to get a clearer picture of how many customers are truly unable to keep up during the coronavirus pandemic.

Forbearance programs from March are nearing expiration dates, when many banks are set to decide whether to continue letting people put off roughly $150 billion of debt including credit cards balances, personal loans and car payments. In interviews, executives said they’re concerned that at least some borrowers sought relief unnecessarily and that they should be coaxed into paying. A number of firms aim to whittle out such participants, or charge interest to continue.

“I would imagine we may have to go beyond 90 days” of forbearance, Chief Executive Officer said in an interview, referring to the expiration date for many programs. “I feel pretty strongly that many of the folks who took advantage of the consumer payment holiday we provided probably didn’t have to. But if it’s offered, why not, right?”

The rapid rollout of forbearance programs in March averted financial ruin for millions of households, giving Congress time to bolster unemployment benefits and offer emergency aid to businesses. The goal was to avoid a tidal wave of defaults by borrowers who began losing income when states locked down commerce to slow infections. More than 30 million people have since filed jobless claims.

But many lenders offered to postpone bills with no proof of hardship, and many borrowers kept working. Some signed up for the programs as a precaution, taking a break from payments to shore up their savings. That’s made it impossible for banks to gauge the degree to which their loan portfolios are at risk of going bad.

Some mid-sized banks placed more than 15% of their loan books into forbearance by the end of March, Janney Montgomery Scott analysts wrote in a report last week. In regions like the U.S. Southeast, relatively high rates of borrower relief contrasted with low infection rates at the time. Many programs have remained open since then, continuing to take on borrowers who have fallen on hard times. 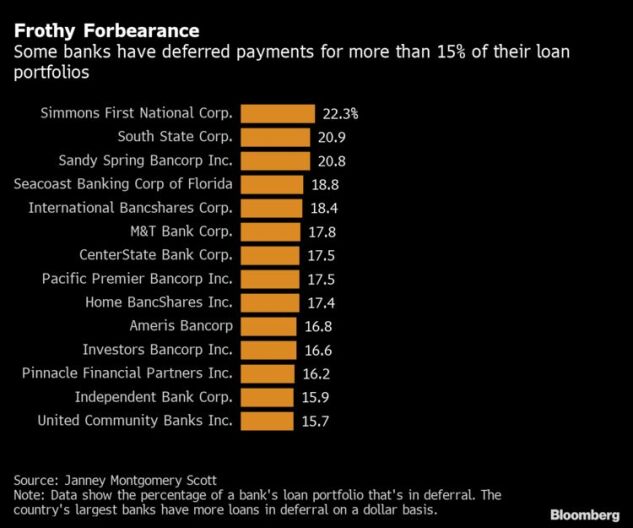 On average, banks had about 5% of their consumer loan portfolios on ice as of mid- to late-April, analysts at Keefe, Bruyette & Woods wrote in a report this month that compiled disclosures from about 80 large, regional and community banks. Based on Federal Reserve data, that would equate to roughly $150 billion in loans -- though the amount may have climbed since then.

Those figures don’t include U.S. mortgage forbearance programs that let borrowers with government-backed loans postpone payments for as long as 12 months while dealing with the pandemic.

The consumer-loan deferrals have left banks, shareholders and even regulators in the dark on how many people are truly in distress and what the ultimate cost to lenders may be. Some executives expect to get a clearer view of the situation in the second half of the year.

For now, regulators are letting banks put off that reckoning. In March, a bevy of watchdogs made it easier for lenders to modify terms, such as by lowering interest rates or letting borrowers skip payments. The moves wouldn’t necessarily require banks to label those situations as “troubled debt restructurings,” which require more capital.

“My belief is losses aren’t coming until third quarter for banks,” , CEO of Valley National Bancorp, said in an interview. Because banks granted deferrals to pretty much everyone who asked for it, “we have no idea, outside of hypothesis, as to what’s going to happen from a credit perspective.”

Banks are now examining millions of account holders to determine who is taking advantage of the programs. The efforts include trying to figure out which customers still have jobs by checking databases operated by major credit reporting firms.

In a more innovative approach, some lenders are hoping to reverse the flow of information that’s flooded from banks to financial technology ventures in recent years. Aggregators such as Plaid and Envestnet Inc.’s Yodlee have been collecting account data and providing it to apps that offer help with personal finances or investments. Now, banks are hoping to tap into that information to glean a more complete view of their own customers’ finances, such as their balances at other banks.

“We’ve heard from some banks about their interest in using Plaid products for forbearance relief and are working with them to see if it can be used,” said John Pitts, head of policy at Plaid, which recently created a platform that makes it easier for banks to share their data with outside apps.

Some banks are considering letting customers continue skipping payments but reinstating interest on loans, a move that could make forbearance less enticing for those who don’t absolutely need it. Others might require customers to show additional proof they’ve been impacted by the virus.

“The banks want to genuinely help,” said Scott Barton, managing partner at 2nd Order Solutions, which advises lenders on collections and forbearance processes. But they “would like to start to differentiate and not give away money to people that don’t really need it right now.”

Forbearance deadlines vary by bank and customer. was one of the first banks to offer forbearance, initially granting a 30-day reprieve that it since extended twice until May 31.

Generally, the nation’s largest banks -- also including , Bank of America Corp. and -- have said they will at least check in with borrowers in coming weeks as they assess how to continue programs and whether to encourage people to use other options. Those can include modifying loans or restarting some payments for credit cards or car loans.

So far, the programs seem to be easing financial strains during the pandemic. Fewer households were late on their cards, car loans, personal loans and mortgages in April than in March, according to TransUnion data released Wednesday. That upended expectations that consumers would fall behind on their debts as a result of widespread joblessness and the forced shutdown of the U.S. economy.

Matt Komos, TransUnion’s vice president of research and consulting, said households may be postponing payments to keep an extra cash cushion just in case the economy worsens. Indeed, many consumers who deferred loans sent payments anyway, sometimes far more than the monthly minimums to reduce their overall debt loads, TransUnion data show. At , about a third of people who asked to delay credit-card bills ended up paying, CEO said Tuesday on Bloomberg Television.

“A lot of the banks are in the dark a little bit in terms of how to treat customers,” said Alan McIntyre, senior managing director for Accenture Plc’s banking practice. “The measures they focus on to manage credit quality -- those dials aren’t moving. And those dials aren’t going to move until the fall.”