Fines and prosecutions of white-collar crimes fell during the administration, but lawyers are anticipating a ramp up that would return the government to its past practice of scrutinizing corporate wrongdoing. , a defense lawyer in New York, said his white-collar practice like many others in Manhattan, ground to a halt during the Trump administration.

High on the agenda for federal prosecutors are likely to be tax cheats and foreign-bribery cases, Anello and other lawyers said. In addition, there will be lots of potential charges to come out of the rush of government funding disbursed to offset effects of the pandemic, including the Paycheck Protection Program, which grew to $525 billion and used thousands of banks, lawyers said. 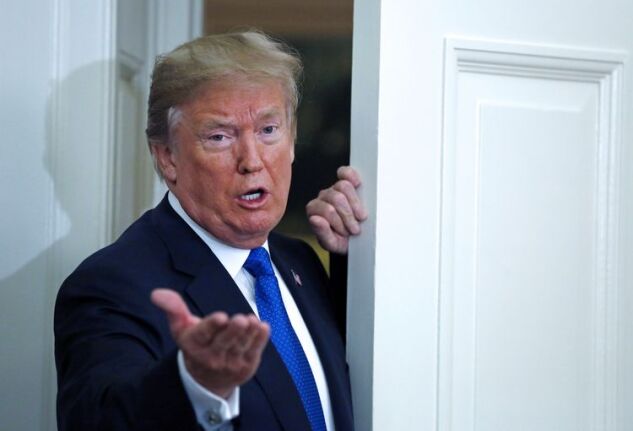 U.S. President Donald Trump speaks after an announcement in the Oval Office of the White House in Washington D.C., U.S., on Thursday, Nov. 2, 2017.
Photographer: Martin H. Simon/Bloomberg via Pool

law professor Brandon Garrett, who has studied corporate crime prosecution under the Trump and presidencies, says a shift under Biden, a public defender before going into politics, may not be immediately obvious as securities prosecutions can take many months or years to build. He expects more such cases, which can include insider-trading investigations and accounting scams.

“There’s often kind of a life cycle to fraud,” Garrett said. “If we have lax enforcement for a number of years, there will be a lot of serious misconduct and fraud that will have been brushed under the rug and so I would expect a serious backlog of cases of all types.”

A Justice Department spokesman declined to comment on the administration’s record. Biden’s transition team didn’t respond to a request for comment.

Trump calls himself the “law and order” president, but when it comes to white collar crime, he has overseen a significant decline in enforcement. The U.S. prosecution of securities fraud, antitrust violations and other such crimes has hit a record low as the pandemic slows the courts, but even before the coronavirus, the figures were falling, according to ’s Transactional Records Access Clearinghouse, or TRAC.

The Justice Department has said it’s been tough on white-collar criminals, but TRAC’s data show a drop of about 30% in average annual prosecutions under Trump as compared with Obama. 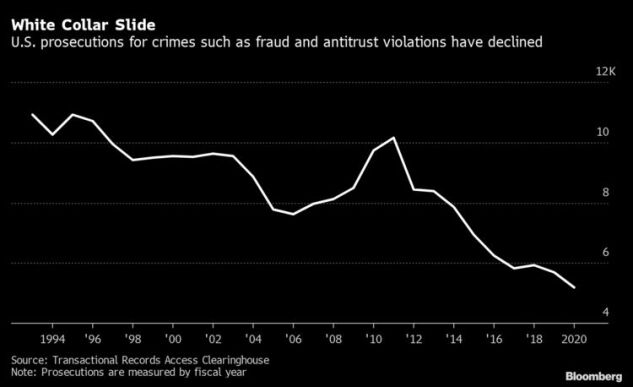 “Anything would be a step up from Trump’s complete neglect of white-collar crime,” said Cheryl Bader, a professor at Fordham Law School in New York. “He wants to see himself as the business-friendly president.”

The waning days of the Trump administration did see several notable corporate cases end in guilty pleas. reached a deal in which its Malaysia unit and agreed to pay $2.9 billion in penalties for conspiring to pay overseas bribes. That case began under the Obama administration.

also agreed to to felony charges and pay a hefty fine to settle probes of the marketing of OxyContin, the highly addictive painkiller blamed for helping spark the U.S. opioid epidemic. No individuals were charged.

To the surprise of some, bribery cases have been “extremely robust” over the past four years, said , a law professor at , who runs a website dedicated to the law. But during his tenure, Trump has also pushed his Justice Department to go after gangs, immigrants, left-wing activists and even political opponents, rather than corporate wrongdoers.

, who served as the top federal prosecutor in central Florida under Presidents and Obama, expects more fraud cases involving health care and stock swindles, like those he targeted as U.S. attorney from 2008 to 2010.

“Violent crime has been a priority for the Trump administration,” said Albritton, now a partner at Phelps Dunbar LLP in Tampa. “I would anticipate fewer resources devoted to immigration crimes.”

Biden will set the tone for his Justice Department when he names his attorney general, and early speculation includes New York Governor and former Deputy Attorney General , both of whom have experience prosecuting white-collar cases.

Whoever Biden picks will first have to restore morale in a Justice Department that became partisan under Trump and Attorney General , said Jennifer Rodgers, a former federal prosecutor who now lectures at Columbia Law School.

“Anyone going into DOJ and a new administration is going to have a lot of work to do and a lot of priorities,” Rogers said. “Someone coming in will need to immediately say, ‘We’re not doing this anymore.’”

To contact the reporters on this story:
in Federal Court in Manhattan at pathurtado@bloomberg.net;
in Wilmington, Delaware, at cyasiejko1@bloomberg.net